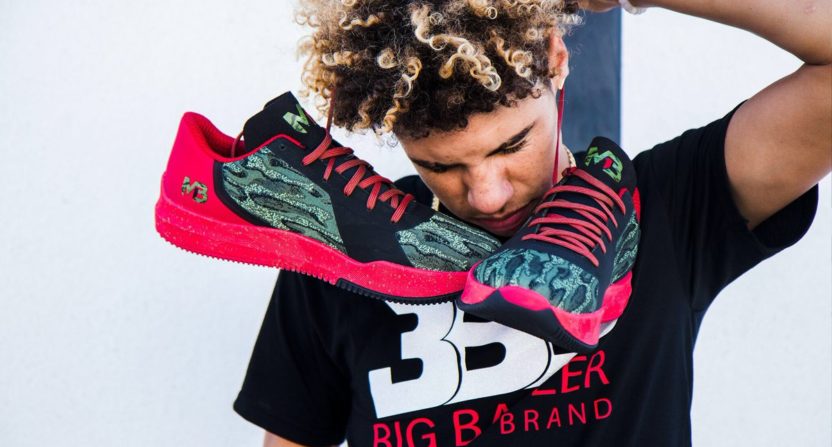 LaVar Ball’s Big Baller Brand is all about promoting him and his three sons. The oldest, Los Angeles Lakers rookie Lonzo Ball, already has a “successful” shoe to his name. Ever the entrepreneur who knows when to strike when the iron is hot, LaVar isn’t waiting for his third son LaMelo to get to the pros before introducing his own sneaker. In fact, he’s not even waiting until LaMelo gets to college.

Today, LaMelo Ball becomes the 1st high school player ever to have his own signature shoe. The "Melo Ball 1" pic.twitter.com/3EpJuBA1EF

The Melo Ball 1, or MB1, is now available for pre-order through Big Baller Brand’s website for $395. Guess you gotta factor in the little brother discount.

You probably have a lot of questions. Cheif among them would be, “Uh, doesn’t it make the high school junior ineligible to play college basketball now?”

Maybe? Probably? One person who doesn’t seem that worried about it is LaVar Ball.

“We’ll worry about it when we get there,” LaVar told ESPN. “Who cares? If he can’t play, then he can’t play. It doesn’t mean he’ll stop working out and getting better…Maybe in two years, they’ll change the rule and he’ll be able to go to the NBA straight out of high school.”

The Ball Family is at least hesitant enough not to give middle brother LiAngelo Ball his own shoe just yet. He’s a freshman for the UCLA Bruins and would definitely see his eligibility compromised if he endorsed the brand.

In the meantime, Twitter has seen the sneakers and Twitter’s got jokes.

LaMelo's new #BBB shoe is $400 and looks like a Steph Curry low that spent all week at the Gathering of the Juggalos.

Trying to figure out how LaMelo Ball can be eligible to play in college while having his own signature shoe like: pic.twitter.com/NrbB7R39Qq

if your first thought about LaMelo Ball's sneaker is his eligibility, you're the feds