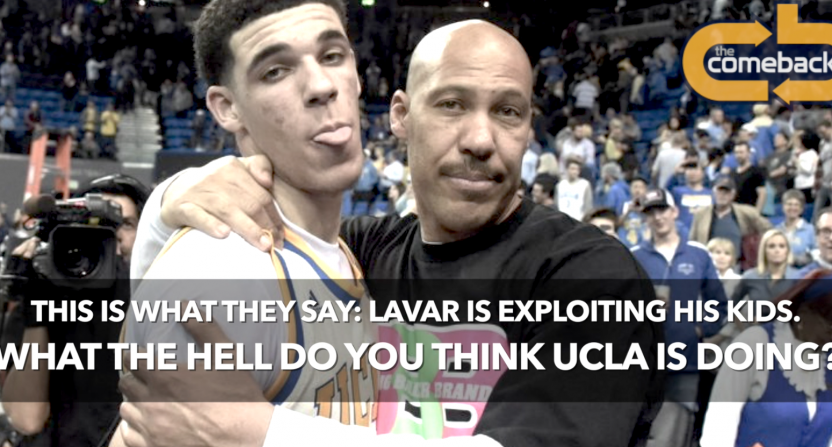 Lonzo Ball is one of the best players in college basketball, and as such, he’s making UCLA millions of dollars. He’s helped save coach Steve Alford’s job (and potentially land him a new one), and he’s the face of a team that could make a run to the Final Four.

Ball isn’t making any money for himself right now, because NCAA amateurism rules prohibit it, even though he could be making millions in endorsement deals. But the real problem with Ball’s situation, according to his critics? His dad.

LaVar Ball is, without a doubt, the most outrageous sports dad in college sports. He says that Lonzo is better than LeBron James, that Lonzo will only play for the Lakers and that he would have beaten Michael Jordan in one-on-one back in his prime. All of these statements are ridiculous, of course, and there’s no doubt that the elder Ball is often over the top.

But is Ball a bad sports dad? The evidence says he’s the opposite.

Ever since his son broke out into the national spotlight at UCLA—and his two younger sons committed to UCLA—Ball has been promoting his own family brand: The Big Baller Brand. The family sells athletic apparel of all kinds, and Lonzo pushes the limits of NCAA rules by being part of the the brand, which sells t-shirts for $50 and hoodies for $70.

Critics say LaVar is exploiting his sons. He’d like to point out their hypocrisy, as he did with this money quote to ESPN:

“This is what they say: ‘LaVar is exploiting his kids.’ What the hell do you think UCLA is doing?

“‘I’m protecting you from the exposure.”

He delivered that while laughing, obviously mocking the NCAA’s defense of its amateurism rules.

LaVar Ball is undoubtedly making money off of his kids. Whether that’s a problem or not is up to you. For the record, Lonzo doesn’t see it as a problem:

“It’s not like he’s making me do this,” Lonzo says. “I actually wanted to do this. My dream is to play in the NBA. [My mom and dad] are making this fun.”

“My dad’s a funny guy,” Lonzo says. “People were coming up to me and saying, ‘Are you embarrassed? Your dad said you’re going to win the championship.’ No, I’m not embarrassed. I know how he’s going to act. I just go out there and play. Let him be him.”

Yes, LaVar is making money off Lonzo, but he’s doing it in a way that, in theory, allows him to give back to his kids. Lonzo can make money off his brand once he gets out of college, and he’s getting exposure that other future NBA stars can only dream of. Your typical NBA fan might not know a lot about projected top pick Markelle Fultz (he played for Washington), but they’ll sure as hell know about Lonzo. Lonzo will have instant earning potential that his fellow 2018 NBA Draftees won’t share.

UCLA? Well, the school is mostly interested in making money off Ball, under the guise that it is simply protecting him from commercial exploitation. The school is selling apparel from its Sweet Sixteen run that wouldn’t have been possible without Ball, and it wouldn’t be getting the national TV exposure it has gotten this season without Ball’s help.

For too long, NCAA rules have allowed schools to swallow up all of an athlete’s earning power and put it back into the athletic department. It’s how schools like UCLA bring in nearly $100 million per year, while athletes walk away with nothing but a degree that is often relatively worthless.

LaVar Ball is using his son to make a mockery of the NCAA’s logic. He’s exploiting Lonzo’s talent to improve his son’s Q-rating, while UCLA and the NCAA only want to keep Lonzo’s payoff for themselves.

It might not be traditional, but that’s a good dad whose plan could help more athletes take advantage of the earnings potential that’s regularly taken from them.