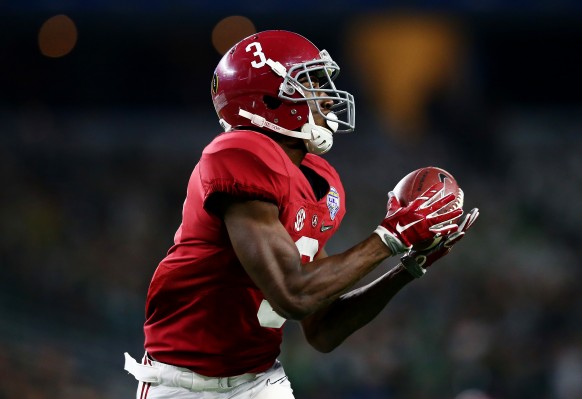 The 2015 Cotton Bowl was played twice.

The first one was staged on the first day of 2015. The Michigan State Spartans won that game against Baylor.

The second 2015 Cotton Bowl unfolded on the last day of 2015. Michigan State most certainly did not win in its return to suburban Dallas.

The irony surrounding the second edition of the 2015 Cotton Bowl is that the Alabama Crimson Tide’s offensive approach was strikingly similar to their previous College Football Playoff semifinal against a Big Ten team.

Again, Derrick Henry was not the central actor in the Tide’s offensive plan. Again, Henry did not accumulate a large amount of touches in a playoff semifinal’s most important and decisive moments. Again, Alabama offensive coordinator Lane Kiffin put the game in the hands of his quarterback.

That’s where the similarities ended in a comparison of Alabama’s two playoff semifinals.

The only team to make the final four in each of the first two seasons of the College Football Playoff system, Alabama authored an outcome which was 180 degrees different from the 2015 Sugar Bowl against Ohio State.

This time, the Tide made their pass-first offensive plan work for them. This time, their defense destroyed an opposing team’s offensive front. This time, Alabama was at its best in the third quarter instead of being at its worst against the Big Ten champion.

Losing a 21-6 lead and a playoff semifinal to Ohio State created a very long offseason in Tuscaloosa. Nick Saban and every Alabama fan expect to compete for national championships. Falling short of the final stage last season didn’t merely prevent the Tide from achieving their goal; the result against a No. 4 playoff seed created the drumbeat surrounding the advent of the new playoff system:

“What if the playoff had existed instead of the BCS over the past 10 years? Would Alabama have won as many national championships then? Maybe other No. 4 seeds would have prevented Saban from winning titles. Alabama’s supremacy in college football is overstated.”

Alabama had to hear and read that line of thought — and many other related commentaries — over the course of the eight months between the Sugar Bowl and the start of the 2015 season. After the loss to Ole Miss in September, Alabama could not have afforded a second loss if it wanted to return to the playoff and earn its way back to the pinnacle of college football.

Indeed, Alabama cleaned up its act and ran the table through the rest of the SEC slate. Able to make a second appearance in the final four, Alabama showed — from start to finish, in the actions of every player and in every facet of competition — that it had learned all the lessons it needed to learn.

Against Michigan State, Alabama might not have used Henry that much, but the Tide accumulated a 17-0 lead early in the third quarter despite rushing for fewer than 45 yards up to that point in time.

The contours of Kiffin’s offensive game plan might have been familiar to anyone who watched Alabama-Ohio State at the beginning of 2015, but the complete absence of major mistakes from Coker was more than enough to get the job done at the end of 2015.

A little bit of playmaking magic didn’t hurt Bama’s cause, either:

The play of the night… in more ways than one. #CottonBowl #CFBPLAYOFF

As it turned out, Alabama didn’t need to score anything more than one touchdown to win this game, but a steady stream of precision passes from Coker enabled Alabama to gain a substantial lead with Henry in the shadows. Coker did not enjoy a seamless and smooth regular season journey, but after hearing so many doubts about his own skill set, he played this Cotton Bowl with something to prove.

In a notable contrast with the day’s earlier playoff semifinal, Coker didn’t engage in a lot of barking to the press about a perceived lack of respect. That was the path chosen by Oklahoma quarterback Baker Mayfield. Whereas Mayfield spoke openly and at length about wanting to be more respected, Coker put his head down and did the hard work necessary to earn respect. His clinical performance against a legitimately tough Michigan State defense — 25 of 30, 286 yards, 2 touchdowns, no interceptions — will change a lot of minds about his identity and reputation as a player. Mayfield, meanwhile, endured a rough outing for Oklahoma in a decisive loss to Clemson.

Talk is cheap. Performance speaks a lot more authoritatively, and as 2015 ended, Jacob Coker owned the biggest megaphone inside Jerry Jones’s pleasure palace in North Texas. It was reasonable to see Coker as the inferior quarterback in the Cotton Bowl, but he dramatically outplayed Connor Cook, who — like his Michigan State backs and receivers — was dwarfed by the moment… and by Alabama’s defense.

This leads us to the other central component of Thursday night’s Cotton Bowl conquest, colored in Crimson from beginning to end.

On the first night of 2015, Alabama allowed Ezekiel Elliott and Cardale Jones to accumulate over 500 total yards for Ohio State, and at least 20 points in both halves. The Buckeyes easily erased a 21-6 deficit against the Tide. In the third quarter of the 2015 Sugar Bowl, when given a chance to make adjustments, Alabama defensive coordinator Kirby Smart could not find solutions. Ohio State scored 14 points in that quarter to take the lead and eventually claim a 42-35 victory.

The Alabama defense which played the 2015 season in the shadows of that failure was able to avenge it against Michigan State.

After shutting out the Spartans — which finished in the top five in both the 2013 and 2014 seasons, and then reached the final four this season — the Tide certainly turned things around. Every snap gave Bama’s defense a chance to write a different script relative to the Ohio State setback.

It’s safe to say that Smart published a different sort of screenplay. It’s quite evident that every last Alabama player’s editing and revising skills were on point in Arlington, Texas.

Whether it was the bull-rushing relentlessness which flustered Connor Cook, or the immovable mastery between the tackles which allowed a mere bread-crumb total of rushing yards (29), Alabama squeezed the Spartans and choked the life out of them. On only one drive, a two-minute march just before halftime, did Michigan State gain any real momentum on offense. Yet, when Cook telegraphed a throw into coverage and Alabama intercepted it, the “always find a way” identity the Spartans had cultivated over the past several seasons no longer remained trustworthy.

That interception just before halftime didn’t merely preserve a two-score lead for Bama; the play shook Michigan State’s confidence. More precisely, it shattered the notion that the Spartans — so good at staying in a game when playing at a C-plus level, and then making defining plays in moments of truth — were going to make this a nail-biter heading into the final few minutes of the fourth quarter. Sure enough, when Alabama roared to an easy touchdown early in the third quarter for a 17-0 lead, Michigan State faded into the night.

Alabama gave up 14 points to Ohio State in the third quarter of last season’s semifinal against a Big Ten foe. One year later, the Tide rang up a 21-0 third quarter against a different Big Ten champion.

Alabama and Clemson shut out Michigan State and Oklahoma by a combined score of 49-0 in the second halves of these two semifinals on New Year’s Eve. That’s just one of the many talking points which will be discussed in due time before the College Football Playoff National Championship Game on January 11 in Glendale, Arizona.

Another talking point is this one: Alabama — having learned from its first College Football Playoff semifinal against a Big Ten team — has every right to feel supremely confident heading into its date with destiny… and Dabo … in the desert.