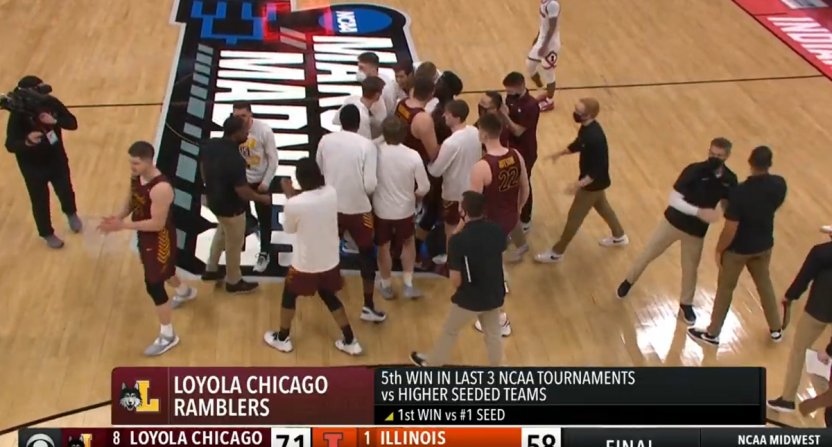 Illinois was a very popular pick to win it all at whichever bracket pool site you want to pick. They were top-rated by metrics like KenPom, they’d won the Big Ten Tournament (and probably should have been considered Big Ten regular season champs.) They passed every possible test you’d want for a March contender, and now they’re going home, sent packing by #8 seed Loyola-Chicago, 71-58.

In a vacuum, that’s surprising enough, but watching the game, the real surprise to many may have been that for pretty much the entire game, Loyola just looked like the better team. Put them in generic jerseys, take away the seeds on the screen, and viewers would have come away thinking that Loyola was the #1 seed, with an underdog Illinois fighting to keep it close.

Part of that is on the committee; there’s no world in which Loyola deserved to be seeded this poorly. Ranked #17 in the AP poll and, more revealingly, ranked as a top-10 caliber team by KenPom heading into the tournament (even the NCAA’s own NET rating loved them), Loyola was clearly a very good team. Their Final Four run a few years ago clearly wasn’t a factor in seeding, and it shouldn’t have been. But whatever sort of biases saw the committee bump them down at least a couple of seed lines too many also shouldn’t have been a part of their seeding.

It's still absolutely insane that Loyola Chicago was put in this position. But here they are showing how good they are. https://t.co/v5hQVdTlLq

As aggrieved as Loyola had a right to be, Illinois may have had an even bigger complaint. The committee’s seeding meant they had to face, even at the low-end estimation, a top-15 team in the second round of the tournament despite earning a #1 seed. That’s brutal, and Illini fans have a complaint there.

That said: it was still decided on the court, and Loyola made it clear from the start that they weren’t just happy to be back in the dance.

This was a team with a fantastic defense, top-rated by analytics, and that defense came to play today, forcing Illinois into turnovers and out of their comfort zones. Illinois also had a top defense, but the Loyola attack just picked them apart all afternoon.

Summed up quickly: Illinois never led the game. At all. It was tied 2-2, and after that, Loyola never trailed. It was never even tied again.

The Ramblers opened up the game with a 9-2 run, and they didn’t relent. They led by nine points at the half, and Illinois trailed by at least six points for the entire second half. It was a total clinic put on by Porter Moser’s crew, and it’s a great reminder that while Sister Jean and the underdog vibe from 2018 was a ton of fun, underneath it all there was a very good basketball team led by a very good coach.

(If you want a deep dive into their defensive scheme, I can’t recommend this more. It’s incredibly fascinating, focusing on how Moser has blended a variety of defensive schemes into a unique mixture designed to take away corner threes and other looks offenses typically try to generate:)

This year’s team was even better all season, and they didn’t waste their first chances to show it on the national stage against major conference competition, dispatching Georgia Tech on Friday and then just completely dominating Illinois today.

It’s telling that Loyola managed to force Illinois into a game much more suited for the Ramblers. Loyola didn’t pull the upset with a barrage of threes (4-10 for the day.) In center Cameron Krutwig, they have a player capable of going for 19 points, 12 rebounds, 5 assists, and 4 steals, but they’re not a one-man show a la Steph Curry’s Davidson teams. It wasn’t a lopsided officiating day (16 fouls for Loyola, 18 for Illinois.)

Sister Jean's prayer called for Loyola to hold Illinois under 30% from 3-pt range and you better believe it happened. pic.twitter.com/0Zyimv1Olk

The Ramblers just play an incredibly sound, smart system of basketball on both sides of the game.

A brief analytical thought: Illinois keeping big man Kofi Cockburn dropped deep in the lane while Krutwig orchestrated the offense at the top of the key might be something Brad Underwood regrets when he looks at the tape. Not only did it allow Krutwig to execute dribble hand-offs and hit cutters without any hassle, in the second half that lack of ball pressure really let Loyola move at their speed and shorten the game when Illinois needed to be pushing to get back into it.

It seemed to really shake Illinois out of their rhythm; watching a lot of Illini basketball this season; they hadn’t scored fewer than 70 points since January 10th and the Ramblers held them under 60. But Loyola’s pace on offense and discipline on defense just seemed to grind Illinois out of the game early, and they never took their foot off the gas.

Even if the car was only going 40 MPH.