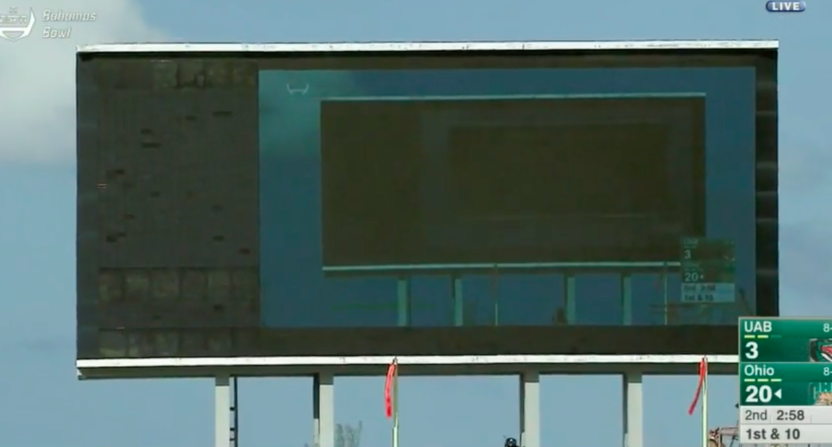 Bowl games are a tricky thing. For the most part, they’re just overblown exhibition games that no one outside of the two fanbases involved really cares about. They exist as much to line the pockets of the people behind the game and the network that broadcasts it as they do for the players and coaches. The last group of people who the game is there to serve, most often, is the fans themselves.

Not so at the Bahamas Bowl. When introduced in 2014, it felt like a sign of the pure excess that comes out of the bowl game process. We’re gonna ship these kids to the Bahamas to play one another in a game few people will attend or watch? That’s their prize? And yet, the Bahamas Bowl has persevered. If some of the people who attended this year’s contest are to be believed, it might actually be the best ticket out of all the bowl games, including the National Championship.

The Bahamas Bowl putting ESPN's image of the broken scoreboard on the jumbotron resulted in SCOREBOARDCEPTION https://t.co/UB9med73ZS

As the Ohio Bobcats were busy blowing out the UAB Blazers on the field, two different fans took to Reddit to share their gameday experiences, which were unique, to say the least.

Brought beer right in to the stadium. The locals at the gate didn’t even ask to check tickets. One of them took a sip of my beer. -We walked all the way around the stadium, until we reached a fenced off area. A Royal Bahamas Defense Force guard said we should check behind the fence, because he doesn’t know what’s back there. Upon walking past the fence, we ended up in the Ohio locker room. No questions asked. -People are constantly walking on the athletic track around the field and chugging beer. The security forces down there just keep laughing and high fiving everyone. One of the soldiers keeps hugging random fans. -There’s a native family in front of me literally braiding eachother’s hair. They told me they have no clue about how football works. They just want to have a good time. One of them offered to braid my hair. My hair is 3 inches long. -They were doing a T-Shirt toss, and one of the Bahamian families here straight up jumped three rows down onto a group of fans just to grab a shirt. They ended up getting two. -A drunk fan just walked on to the sideline and high fived a player. He then high fived a Royal Bahamian Defense Force soldier when walking back. The soldier couldn’t stop laughing. -There’s like 20 entrances to this stadium, and only like 10 of them are guarded. Literally anyone could walk in here. -They have one working scoreboard, and instead of showing the clock, it’s the ESPN feed so you can barely see the score and clock on the bottom right corner. -Whoever’s in charge of music can’t decide the volume. He tried playing Believer and adjusted the volume up and down around 4 times before giving up. There hasn’t been any music since.

For good measure, they even included photographic proof of the drunk guy with the flag and a group of fans just casually walking on the sidelines.

Then, in the comments, another fan chimed in with their own experiences, which echo the “carefree” mentality of the game.

I had to walk 10 minutes to the complete other side of the stadium because no one knew where the nearest bathrooms were -We had tickets at will call because my little brother plays for OU, but the line was too long, so we just went up to the gate, beers in hand along with another bag of 6 bud lights for $12, told them “we’ve already been in”, and they let all 6 of us right in without checking anything -The entertainment on the outskirts of the stadium right next to concessions includes ARCHERY. I saw a child as small as 4 getting help aiming an actual bow and arrow at a target 20 ft away -The play signalers for OU (not sure what their official term is) are all wearing Hawaiian shirts on the sideline -They played Sandstorm three times in a row at the beginning of the game and I was worried that was the only song they had until the volume issue stated by OP occurred -Some of the OU players on the sideline are wearing bucket hats and sunglasses -Attendance is max 2000

For its part, the Bahamas Bowl is owning their casual atmosphere. That, or they didn’t actually read the posts.

It is amazing. We promise Bowl Games are Better in the Bahamas!

See you at the Bahamas Bowl next year.