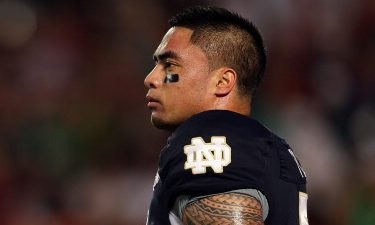 It’s been nearly 10 years since news broke that former Notre Dame star linebacker Manti Te’o had been catfished. While Te’o faced plenty of hate and ridicule back in 2012, a new documentary has people on Te’o’s side.

On Tuesday, Netflix debuted a documentary in its Untold series titled, The Girlfriend Who Didn’t Exist, detailing Te’o’s catfishing ordeal. The response has been overwhelmingly positive, with Te’o finally getting some support across the country.

On Saturday, the former Notre Dame linebacker shared an emotional video on Instagram thanking everybody who has offered him messages of support over the past few days.

“I just wanted to come out here real quick to give a heartfelt thank you to everybody who has come through and has shown so much love to me and my family, for your messages, for your comments,” Te’o said in the video. “It’s been amazing to me to hear the battles that we’re all facing, the challenges that we’re facing in our lives at this time and how the documentary has given some of us hope, the extra push just to keep going, if there’s anything that I wanted from this thing was just to give some of us hope who needed it, to tell those who needed some love that they’re loved, and to help them to forgive.”

While nothing will fully make up for the impact the story had on his life, it’s great to see Te’o finally getting some love from across the country.