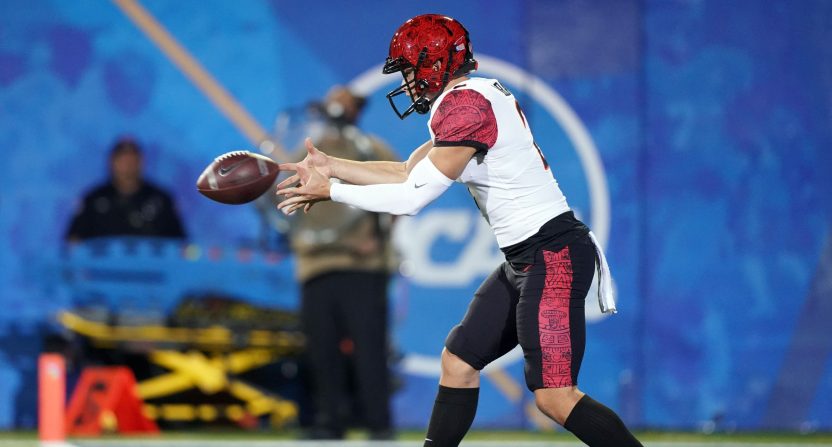 The Los Angeles Times broke the news that a civil lawsuit filed Thursday accuses two current San Diego State football players and former player Matt Araiza, who is now a punter with the Buffalo Bills, of gang-raping a 17-year-old girl at an off-campus party in 2021.

According to the lawsuit, the teenager told Araiza that she was in high school and, although she was intoxicated, the punter had sex with her. He then allegedly took her to a room where he and at least three other men took turns raping her. The accuser says she remembers someone filming the rape as well. Per the lawsuit, all of her piercings had been pulled out and she was bleeding from the vagina.

The other football players named in the lawsuit are offensive lineman Zavier Leonard and defensive lineman Pa’a Ewaliko. Leonard is currently listed on the San Diego State roster but Ewaliko is not.

The lawsuit also alleges that while the incident was well-known, it was noticeable that the football staff and university did not appear to be taking action.

The LA Times notes that their ongoing investigation into the school found that it decided not to alert the campus community about the alleged gang rape and waited more than seven months to launch an investigation of its own.

The lawsuit comes as San Diego State faces ongoing criticism after a Times investigation found that the university decided not to alert the campus community about the alleged gang rape and waited more than seven months to launch its own investigation. https://t.co/ajvJTffdYo

San Diego State has said that San Diego PD told them not to take action so as not to compromise the investigation.

Araiza was a sensation on the field for the Aztecs, where he earned the nickname “Punt God” for his booming kicks. He won the Ray Guy Award as the top punter in the nation and entered the 2022 NFL Draft where he was selected in the sixth round by the Bills. He continued to make a name for himself in the preseason with his kicks and is currently set to make the roster.

The Buffalo Bills released a statement following the report.

“We were recently made aware of a civil complaint involving Matt from October 2021,” read the statement. “Due to the serious nature of the complaint, we conducted a thorough examination of this matter. As this is an ongoing civil case, we will have no other comment at this point.”

Plenty more to come on this disturbing story.