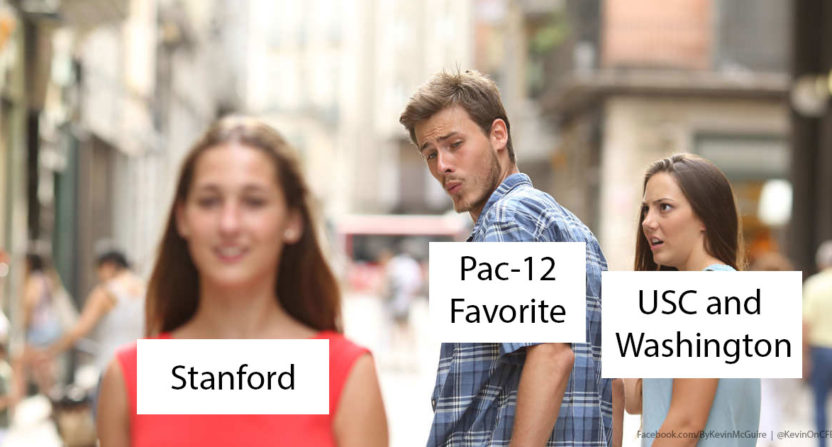 Sure, the big games really get the college football fun started this coming week, but the wins and losses taken in Week 0 still count just as much in the record books as they will in October and November. The so-called Week 0 gave us some good teams putting in some work to get the season underway with some big victories. And with one week of college football in the books, I welcome you back for another season of McGuire’s Musings: a collection of thoughts I had from the weekend that was around college football.

The season is here, my friends. So sit back and check out how I’m viewing things so far this season.

Stanford put on a clinic down under

For all the talk about the Pac-12 being led by either Washington and USC, Stanford issued a kind reminder not to take them lightly this season. Sure, it was only a 62-7 blowout victory against Rice, a team that will struggle just to reach the postseason this fall, but the Cardinals wasted no time getting themselves in sync and breezing their way to an impressive win in Australia. In the end, Washington and USC may be the top two programs in the Pac-12, but anyone counting Stanford out is being unwise.

Colorado State and USF set the Group of Five pace

Two of the top Group of Five contenders got their seasons underway on Saturday, and both did what they needed to do to establish themselves as leading candidates for the Group of Five spot in the New Years Six. Colorado State may have had the more impressive debut by being able to pull away from lowly Oregon State to open up their brand new stadium in Fort Collins. A 58-27 victory over a Pac-12 team, even Oregon State, helps put the Rams out in front out of the gates in the G5 debate.

USF is still the top Group of Five program in my book, though. The Bulls opened up the Charlie Strong era on a slow note on the road against San Jose State, but a signature running game powered the Bulls to a win with 315 rushing yards as a team for a 42-22 victory over San Jose State. Quinton Flowers got in on the rushing fun with 70 yards and a touchdown, while D’Ernest Johnson rushed for 99 yards and Darius Tice added 94 yards. A good debut for Strong, and perhaps a solid debut for offensive coordinator Sterlin Gilbert (a name to keep an eye on in the years to come perhaps).

Gary Andersen off to a rough start in Corvallis

Colorado State manhandled Oregon State in the season opener, which means it is beginning to be more fair game to start putting Oregon State head coach Gary Andersen under a bit of a microscope. After getting blasted by Ohio State in the Big Ten championship game (59-0, if you recall), Andersen went running from Madison to take on the job left vacant by Nebraska-bound Mike Riley with the belief he could not recruit the kind of players he needs to win at Wisconsin.

After going 6-18 in his first two seasons with the Beavers after the program had back-to-back winning seasons prior to his arrival, we can start to wonder if Andersen has managed to make any progress recruiting the type of players he needs to win at Oregon State.

According to the 247 Sports composite rankings, Oregon State has landed the 11th-best recruiting class in the Pac-12 three straight years, and the Beavers are once again behind the Pac in the early recruiting rankings as the 2017 season gets underway. Meanwhile, Wisconsin played for another Big Ten title last season and ended the year with a victory in the Cotton Bowl. On the one hand, you can suggest Andersen had a hand in some of the recruiting of the players leading the Badgers to so many wins. On the other hand, Wisconsin still has not won the Big Ten since Bret Bielema was the head coach. Is it possible Andersen was right about Wisconsin and is still floundering trying to prove his point at Oregon State? Yes, but his reasoning for leaving the Badgers behind for the Beavers continues to look more and more puzzling.

Overreacting to one game is hardly fair, but the Beavers just got worn down by a (very good) Group of Five program and that makes the path to a bowl game in a very difficult one for Andersen and Oregon State.

I’m still not sure what the plan was here, UMass…

This is not how the Hail Mary works, UMass… pic.twitter.com/2KIgr0GxaT

I mean, seriously. What was the thinking here? If anything, get the ball to tight end Adam Breneman and see what he can do.

I may be a tad biased (I am totally biased), but the relationship and level of respect between the Shippensburg University football team and marching band is unlike many you may find around the world of college football. Sure, you can bring the drum line and a handful of musicians in to play the fight song for a summer workout, but at Shippensburg, the tradition of playing for the football team on a weekly basis is one that has been going on for years and looks to be continuing ahead of the college football season at the Division 2 level.

How did I do against the spread?

I share a handful of picks straight up and against the spread each week. In the interest of full disclosure and accountability, I like to revisit them each week to see how I did. So, how did I do this past weekend? Not too shabby, if I may say so myself.

First off, with my straight-up winners, I fared just fine with a 4-1 mark to open the 2017 season. The lone blemish on an otherwise solid week came as a result of a late go-ahead touchdown on the road by Hawaii at UMass (and the above-mentioned failure of the Minutemen to execute a Hail Mary). I’ll take it.

My straight up winners today are:

Against the spread, I also managed to go 4-1, with Stanford’s blowout being the lone bad pick. But hey, 4-1 still wins you some cash, so who’s going to complain?

And my picks against the spread for today:

I know, this is a ridiculous exercise with just a handful of games in the books, but let’s get the fun started early. Based on everything we have seen to date, here is how I would set my College Football Playoff for this season as of right now:

Hoo boy, do we have a loaded Week 1 coming up. You don’t need me to remind you of the highlights at this point since we have been discussing this particular weekend for over a year now. Enjoy it. Soak in as much of the college pigskin you possibly can this coming weekend. It’s go time.

Check back next week for another edition of McGuire’s Musings. The column will add more as more games are played. You can also submit your questions on Twitter or in the comment section below to be featured in next week’s column.