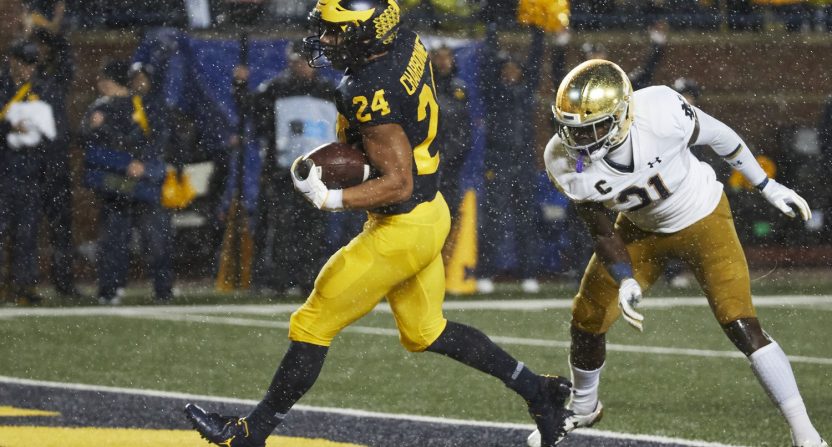 After falling behind on the road last week 21-0 against Penn State in a primetime matchup in Happy Valley, Michigan showed resolve and the ability to dig themselves out of a hole with a physical style of defense and a running game. After coming up one dropped pass from tying the Nittany Lions and potentially taking momentum into overtime, Michigan was faced with attempting to regroup and figure out what works for them as they looked to bounce back at home against No. 8 Notre Dame. And hoo boy did the Wolverines respond.

Starting the game with the same style of play that saw them outplay Penn State a week ago (albeit in a losing effort), Michigan came out ready to punch Notre Dame and punt the playoff hopes of the Irish striaght back to South Bend. After a slow-going first quarter saw Michigan take a 3-0 lead, the Wolverines started taking care of business with a 17-0 second quarter edge and ended up sending Notre Dame home with a 45-14 loss. The loss by the Irish essentially knocks Notre Dame out of the running for a spot in the College Football Playoff, barring a massive amount of chaos in the month of November from coast to coast. For Michigan, playing for pride is one thing, but maybe the Wolverines are ready to embrace the role of spoiler.

There’s nothing Michigan can do about the blemishes on their schedule. The Wolverines were still flattened on the road by Wisconsin early in Big Ten play, and Michigan may continue to be chasing Penn State for not better than second place in the Big Ten East at this point. But if Jim Harbaugh can get Michigan to play like this for the last month of the season, this whole season may still be a massive success for one reason, and it’s the biggest reason of all.

Or, at least, ruining Ohio State’s chance to make the College Football Playoff. The Buckeyes are still rolling right now after dismantling Wisconsin the way Michigan could only dream of doing a month ago. The way things are going, Ohio State is looking like it is about to go 12-0 as they roll into Indianapolis to face Minnesota in the Big Ten championship game (or a rematch with Wisconsin). Ohio State will have to deal with a home game against Penn State, but they’ll get the Nittany Lions at home and Ohio State will be the favorite by the time that game comes up. The Big Ten East division could potentially be decided with the outcome of that game, but the Buckeyes close out the regular season against Michigan.

And if the Wolverines continue playing like they did for the last six quarters, they may be just the team to knock Ohio State off after all. even if it doesn’t result in preventing Ohio State from winning the Big Ten, a chance to knock give a black eye to Ohio State’s playoff chances is still something to get fired up about for the maize and blue.

This Michigan team is what those who predicted a Big Ten title expected to see from the Wolverines this season. Perhaps later is better than never in certain respects. A shot at the playoff may have been whisked away a week ago in State College,  but Michigan has the look of a big, bad team right now, which is a heck of a lot better than just a bad team. If Michigan has finally arrived, then Ohio State could be walking into a hornet’s nest in the final game of the regular season.

Michigan took down Notre Dame’s playoff hopes. Can they end up doing the same to Ohio State?