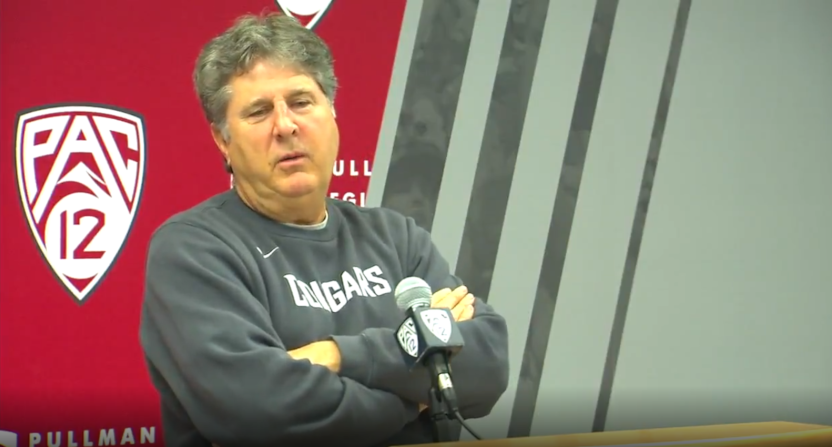 Pac-12 football has a lot of issues, from the complained-about late kickoffs they agreed to for a better media rights deal to the possibility of early-morning kickoffs to their network’s lack of carriage deals and dismal per-subscriber fee to, most critically, their teams’ on-field performance. The conference had five teams in the AP Top 25 last week, with none higher than #11 Utah and with three teams at #20 or below (and one of those, #24 USC, lost to BYU), and while that’s improved to six teams this week, they’re still not above #10. But they do have some entertaining coaches, perhaps led by Washington State’s Mike Leach, and Leach’s in-depth breakdown of who would win in a fight between Pac-12 mascots Monday was highly enjoyable. Here’s that video, via Alyssa Charlston of Spokane ABC affiliate KXLY:

Mike Leach was in peak form on a Pac-12 mascot battle.

Do Sun Devils have mythical powers? And if a Ute has a rifle, there's some definite problems. pic.twitter.com/FCE96RXawe

A transcription, via Joe Coles of The Deseret News:

“First of all, what kind of mythical powers does a Sun Devil have? We’ve got to consider that. I’m going to say the wildcat is out. The Trojan, does he have a horse or is he on foot? Does he have a bow and arrow or just a sword? The bruin, definitely formidable, then another bear up there at Cal. The tree, I mentioned that tree is going to get chopped down, unless we’re going to go with a bird and somebody might get pecked or something. The duck might lose interest and just fly away and get out of there, which may be good advice under the circumstances. The husky, no chance, the beaver, we’ll see how long that beaver can hold his breath.”

“The Ute, again, we’re back to is he on horseback? Does he have a bow and arrow? Did he trade for a rifle? As far as the beast alone, a buffalo is going to be pretty hard to tangle with. A buffalo is utterly outstanding. Did I leave any of them out?”

Of course, Leach had to end by promoting his own school’s mascot.

“The coug will find a way. Clear-minded and crafty — a combination of stay out of harm’s way and attack when you get your chance.”

Amazingly, this isn’t the first time Leach has delivered an in-depth breakdown of who would win in a Pac-12 mascot battle. He did the same thing on a Seattle radio show with Jim Moore and Kevin Calabro in 2012; here’s a transcription of that, via Brian Floyd.

Jim Moore: In a battle to the death among Pac-12 mascots, which animal or person wins?

Mike Leach: The Cougar absolutely. Let’s go through this a little bit. A cougar obviously kills a duck and a beaver. A cougar against a husky … that’s pretty well a massacre. A cardinal or whatever: I don’t know exactly what a cougar would either climb it or I wouldn’t want to think of what else he’d do on it. Now Golden Bears could be kinda tough. I think you’d want to be a little fast and loose with them. You don’t want to get caught by that bear. The Ute … you gotta dodge some arrowheads, but I still like the Cougar. Buffalo … I think the buffalo would be pretty tough to beat. Wildcat: Cougars are bigger than wildcats . Sun Devils, that’s mythical anyway. Trojans, they may be as well. I think you gotta look out for the Bruins and the Buffalo. The Golden Bear, Bruin and Buffalo .. I think those are the tough ones.

Moore: Why the Buffalo?

Leach: Do you want to fight a buffalo? I don’t know, those buffalo are big. You know, buffalo are significantly bigger than elk. I grew up near Yellowstone so I’ve been near buffalo. Buffalo are huge. And then the other thing I’ve always gotten a kick out of: When you play Colorado, there’s those buffalo dragging those six handler around. Those handlers aren’t dragging the buffalo. The buffalo’s dragging him.

Ralphie’s not even a big buffalo. Ralphie pulls those people wherever he wants to.

It should be noted that even the quotable Leach isn’t always providing good headlines for the conference; his other high-profile comment this week was a strange rant against California’s athlete compensation law, saying the state should focus on keeping its streets clean, and some of his past missteps include tweeting out heavily-edited conspiracy videos. But it’s fun to see Leach again discussing mascots, especially when it comes to the Sun Devil (which even Arizona State head coach Herm Edwards has been a little confused by). And given that Leach has co-taught a class on “Insurgent Warfare and Football Strategies” and has been famed for his discussion of pirates, Geronimo, and square dancing, this certainly isn’t out of the blue. And we’re always here for college football conversation that goes beyond depth charts towards hypothetical mascot battles.