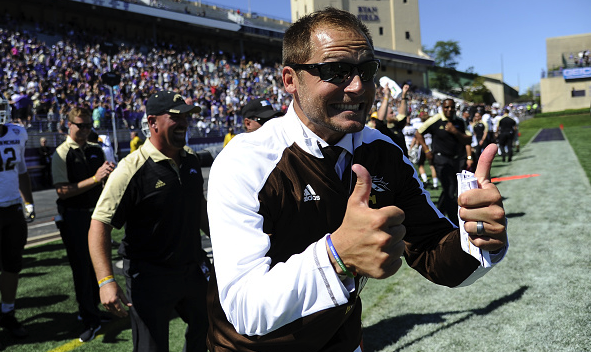 The first thing anyone has to look at when preparing for Minnesota’s 2017 season is the schedule. The Golden Gophers do not play a particularly bad schedule at all. It’s not great, but it’s definitely not anything worse than an average Power 5 team plays.

The Big Ten West is not the toughest division in the country, but it does have one very good team (Wisconsin) and four pretty solid ones (Minnesota, Northwestern, Iowa, and Nebraska), which means that the Gophers will play at least four good teams in its division. Add a cross-divisional game against Michigan and Minnesota is playing a decent schedule in 2017. I just listed five solid-to-great opponents, not to mention that five of the pretty bad teams that Minnesota plays this year are still Power 5 teams.

Fleck to the rescue at Minnesota

After new coach Tracey Claeys lost his job for being in the unenviable position of having to attack his players or having to seem as if he supported a (as-of-then alleged) sexual assault. He chose the latter — supporting his players no matter what their stance — and it cost him his job, even after a very successful season. The program was in turmoil this winter, but Minnesota saved as much of the situation as possible by hiring the new wonder coach P.J. Fleck.

Fleck was coming off the impressive feat of taking Western Michigan to an undefeated regular season and a spot in the Cotton Bowl. His stock had been rising for years, though, as he turned the Broncos around from 1-11 in 2013 (his first year) to 8-5 in 2014. His “Row the Boat” energetic style worked wonders on both the recruiting trail and with his teams. Western Michigan was out-recruiting the rest of the MAC by a decent margin for all of Fleck’s tenure, and it showed last season, when no team even really posed a challenge until Ohio’s inspired comeback attempt in the MAC Championship Game.

This is something very important to keep in mind as we look at Fleck’s success at Western Michigan. His most successful year, by far, came when he had his seniors playing his style, and those seniors included a MAC-leading (tied with Toledo) three NFL draft picks. It is also easy to point at Fleck’s first season at Western Michigan, when the Broncos went 1-11 and weren’t particularly competitive against decent teams, and wonder if all of Fleck’s success at Western Michigan was based solely off his recruiting prowess. If that’s the case, you have to wonder if Minnesota went for the wrong coach. It’s a lot easier to recruit circles around the MAC than it is the Big Ten.

I don’t think the nightmare scenario is such a problem for Minnesota. Fleck won eight games in his second year at Western Michigan, and he did that mostly with Bill Cubit’s players. We have to remember just how bare the cupboard was when Cubit left. Western Michigan had just lost Alex Carder, one of the best quarterbacks in school history who started for three years (minus some injury time). Western Michigan was expected to finish towards the bottom of the MAC, and playing Big Ten teams in three of the first four weeks did nothing to help the confidence of a young team with the youngest coach in FBS.

Fleck is just a little bit older now, and is in fact no longer the youngest coach in FBS (he is now second to Memphis’ Mike Norvell). He has learned plenty from his first coaching gig, and we will truly learn just how much when his Minnesota teams take the field in 2017.

What does Fleck have to work with now?

Like Western Michigan in 2013, the Gophers will have a relatively young team in 2017, returning a total of 14 starters. Much of the offense will be back, including one of the best running back duos in the country in Shannon Brooks and Rodney Smith. However, three-year starting quarterback Mitch Leidner is gone, to the (what I find shocking) great pleasure of the Minnesota fanbase. No one on the roster has any real college experience at quarterback, so the brunt of the offensive work will fall on the line and the running backs, which is probably the way the Minnesota program (and new offensive line coach) Ed Warriner likes it.

However, unlike Western Michigan in 2013 — whose schedule set up the team to fail — Minnesota’s schedule is set up for success. Remember the five games that I highlighted as Minnesota’s toughest? They are the Gophers’ final five games of the season. Minnesota’s first seven games all come against teams that should be close to the bottom third of FBS, except for possibly Michigan State (just because I can’t imagine a Mark Dantonio team doing as poorly as Michigan State is expected to this year).

If Fleck can bring any sort of energy to Minnesota this year, it would be disappointing to see the Gophers start any worse than 7-0.

With a 7-0 start will come the obvious hype, for both Fleck and the Minnesota program. And in a program that hasn’t yet had a chance to recruit players for Fleck’s style, the hype and the belief that will come with it are absolutely what Minnesota needs. If the schedule was more spread out, I would expect Minnesota to maybe win one out of the Big Ten West middle trio of Iowa, Nebraska, and Northwestern, and I certainly wouldn’t expect a win over Michigan or Wisconsin.

The schedule absolutely sets up for Fleck to achieve more than this team should be capable of. And, importantly, this will let us use 2017 as a great barometer for how Fleck will be able to compete in the Big Ten. If he can’t get this team to start 7-0 (or at least 6-1, because it’s hard to be perfect for seven games), then it will raise serious questions about whether he can motivate a program like Minnesota with his “Row the Boat” attitude. But if he does start 7-0, like he should, then what he does after that will give us a great indication as to what he can do when he gets the team to really buy into his attitude.

At some point, if this team does overachieve, the bubble will have to burst. Whether that’s against Wisconsin in the regular-season finale, or possibly against Ohio State or Penn State in the Big Ten Championship Game, or maybe even against a Top 10 team in a New Years’ Six Bowl (if Minnesota can go 10-2 or better), the odds are that Minnesota will be overmatched against an opponent that just has more talent.

Then again, I saw Fleck take his Western Michigan team — which fully bought into his system — to the Cotton Bowl this year and play Wisconsin pretty close. The talent disparity in any games Minnesota plays this year should be less than what Western Michigan had to face in that game. I don’t know what Fleck will do in Minnesota, but I do know that his first year is the best set up he could have to do something really special to kick off his career there.