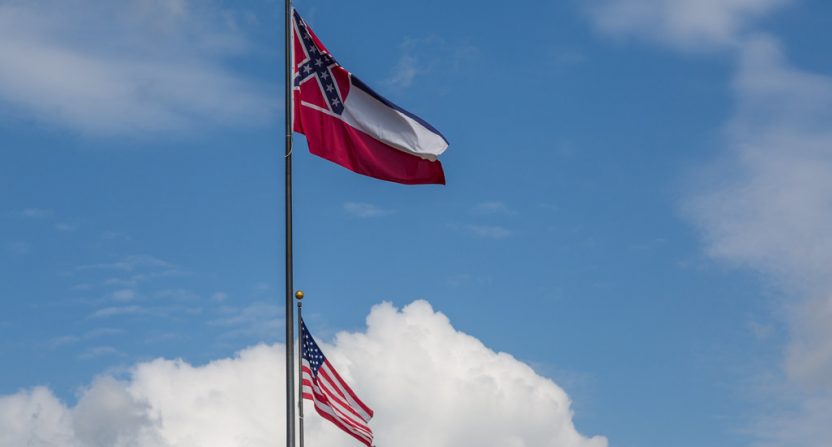 The turmoil and protests of recent weeks have brought many topics to the forefront of national discussions. While opinion may be divided on many of these topics, one issue that most people seem to be in favor of is the removal of Confederate imagery from the public space of the United States. Confederate statues have been toppled left and right over the course of the last few weeks. NASCAR shocked many by officially banning displays of the Confederate flag, which“runs contrary to our commitment to providing a welcoming and inclusive environment.”

The NCAA took similar steps back in 2001 when it enacted a policy that it will not hold predetermined championship events (not counting championship events earned via competition) in any state that flies the Confederate flag. At the time, that means South Carolins and Mississippi. However, South Carolina stopped flying the flag following the Emanuel African Methodist Church murders in Charleston, which left Mississippi as the only state ineligible.

The NCAA expanded that policy on Friday, prohibiting all championship events from being held in the states where the flag is flown, regardless of whether or not the championship was predetermined or earned. As noted, this only affects Mississippi.

“There is no place in college athletics or the world for symbols or acts of discrimination and oppression,” Michael V. Drake, chair of the NCAA board of governors and Ohio State president, said in a release. “We must continually evaluate ways to protect and enhance the championship experience for college athletes. Expanding the Confederate flag policy to all championships is an important step by the NCAA to further provide a quality experience for all participants and fans.”

“Competing in an NCAA championship is a special experience for college athletes who compete at the highest level and we are grateful for the college athlete voice leading to this decision,” NCAA president Mark Emmert said in a statement. “We must do all we can to ensure that NCAA actions reflect our commitment to inclusion and support all our student-athletes. There can be no place within college sports where any student-athlete is demeaned or unwelcome.”

College athletics is putting a lot of pressure on Mississippi at the moment to drop the symbol of the Confederacy. Thursday night, SEC commissioner Greg Sankey threatened to withhold future conference championship events in Mississippi until the state removed the flag.

“It is past time for change to be made to the flag of the State of Mississippi,” Sankey said in a statement. “Our students deserve an opportunity to learn and compete in environments that are inclusive and welcoming to all. In the event there is no change, there will be consideration of precluding Southeastern Conference championship events from being conducted in the State of Mississippi until the flag is changed.”

The SEC has two members in the state, Ole Miss and Mississippi State. Both schools stopped flying the Confederate flag in 2016. The schools released a joint statement following Sankey’s announcement, saying “we support the SEC’s position for changing the Mississippi State flag to an image that is more welcoming and inclusive for all people.”

Conference USA, whose member Southern Miss is in Mississippi, said on Thursday it will review its championship event policies “to ensure we provide environments that align with our continued mission to support and protect our student-athletes.”

All of which is to say, sometimes it simply comes down to money and Mississippi is going to miss out on a lot of revenue if they maintain the status quo. Both Ole Miss and Mississippi State will likely be pushing to make the change so they host events in the future, not to mention that many of its athletes and students would like to see the change happen as well. Of course, Ole Miss also has some other issues to deal with, including their Rebels nickname.

This week, a group of Mississippi legislators proposed a bill that would remove the Confederate symbol from the state flag, but it remains to be seen if it will actually happen.