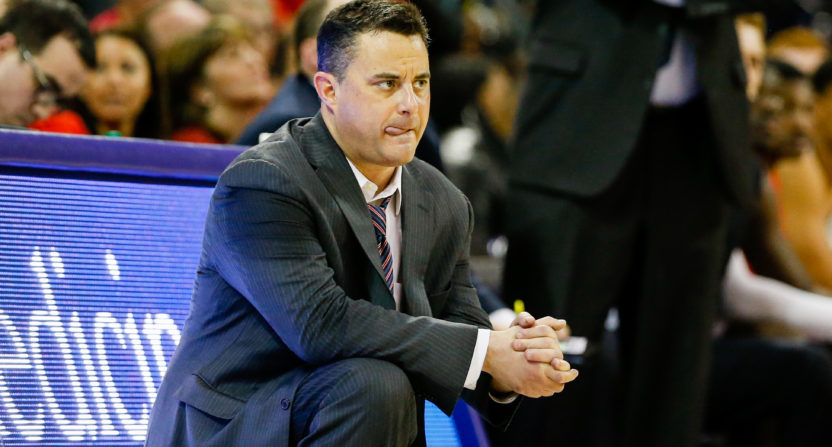 The FBI/NCAA scandal/investigation story took another turn Friday night, as ESPN’s Mark Schlabach reported that Arizona coach Sean Miller had been recorded by the FBI discussing a $100,000 payment relating to the recruitment of Wildcat freshman star DeAndre Ayton.

According to people with knowledge of the FBI investigation, Miller and Dawkins, a runner working for ASM Sports agent Andy Miller, had multiple conversations about Ayton. When Dawkins asked Miller if he should work with assistant coach Emanuel “Book” Richardson to finalize their agreement, Miller told Dawkins he should deal directly with him when it came to money, the sources said.

The telephone calls between Miller and Dawkins were among 3,000 hours of conversations intercepted from Dawkins’ phone by the FBI.

Arizona has already been named, and Richardson has already been fired after he was arrested on federal bribery charges. Miller’s apparent hands-on involvement is new, and it certainly doesn’t look good for him, although there’s no direct quoting there, and without the full context of the wiretaps and whatever records have been uncovered it’s impossible to say how much trouble he’ll end up in.

Similar things can be said about all the schools named in Yahoo’s reporting on Friday.

That didn’t stop the immediate take parade, though, and it’s going to continue on and on into the future. It’s tough to say which of the parties involved looks worst, although as always, the athletes themselves come out looking the best. And anyone who is legitimately shocked, SHOCKED to find that there’s money flowing on the black market of the NCAA is equally annoying. Such willful naivete is almost unbelievable.

The NCAA themselves, of course, probably fall into this camp, although the fact that it took an FBI investigation to uncover actual proof demonstrates how generally complicit they are with the status quo. They look the worst.

The FBI, on the surface, also looks bad:

The reason there is an underground economy in college sports is because the rules prevent an actual economy. 'Twas ever thus. The FBI investigation is tantamount to discovering sand in Egypt.

But ironically, not as bad as people like Charlie Pierce, who should really find somewhere more overcast to live so he can yell at the amount of clouds he so clearly wishes he could, who think they’re providing some sort of real insight with this point.

His thesis, and those like him, comes down to this:

Tough. The FBI should have more important things to do than protect the NCAA's rulebook.

The idea that the FBI investigating alleged federal crimes (and that’s what they are, it’s not about the NCAA’s rulebook; there are US Codes that prevent money from being moved illicitly, especially when you’re employed by government institutions) is somehow beneath them is hilariously misguided. Even if the NCAA made paying players legal under their rules, transactions like those that are alleged to have occurred would still be illegal.

Obviously, a change to the rules would probably eliminate the need to work under the table, and it should clearly be changed, etc. That’s obvious. But it doesn’t change whether or not a crime was committed, and the FBI does that sort of thing. The idea that they’re choosing this over something more serious is also hilarious.

The coaches are clearly lying, and there’s no way this sort of behavior isn’t known or even routine to everyone within the sport. It’s not new. The entire sport is, essentially, a charade. As are all of college sports. Everyone knows, and the money is so big it behooves people to do dumb things, like break federal law to win games.

The system is bad. This investigation is going to drag on and on and on, and any eventual benefit is unclear, because until the NCAA is completely overhauled, nothing’s going to be inherently different. It’s all dumb, and it’s not going away any time soon.