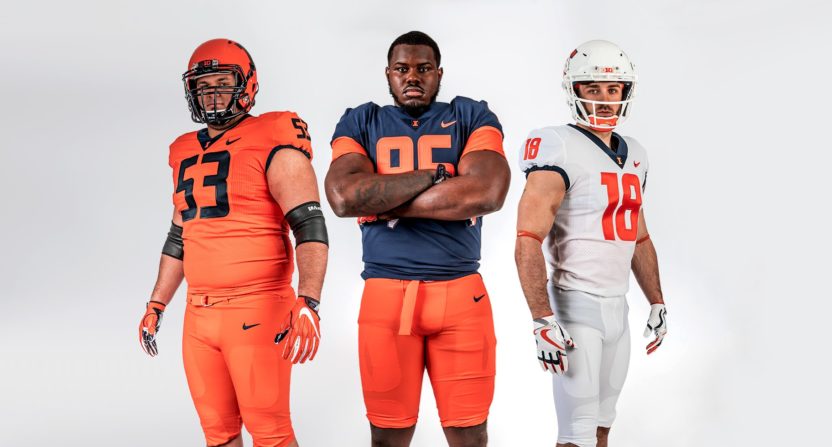 When you stop and think about it, there are a lot of FBS schools for whom orange is a prominent color. You’ve got Oregon State out west, Oklahoma State in the Midwest, and Florida down south. There’s also Clemson and Virginia Tech and Bowling Green and Illinois. And of course, there’s that school up in Syracuse who is literally The Orange. So you’d have to assume that all of those schools would want to make sure their uniforms really stand out in a way that separates them from one another.

Illinois is here to dissuade you of that notion.

Respect the past. Represent the future.

The #Illini will have a bold, yet traditional, look this fall with redesigned @usnikefootball Vapor Untouchable uniforms. #WeWillWin ??https://t.co/eWfBzjwGnE

Friday, the Big Ten school introduced new football uniforms and if your first thought was, “Wait, isn’t that Syracuse’s uniform?,” you were not alone.

Illinois unveiled new uniforms. And they're exactly the same as Syracuse pic.twitter.com/NBwlja9htX

Illinois is trying to convince people that the uniform is actually inspired by the Dick Butkus Era of Illini football by saying the clean, simple layout evokes memories of better days. But the truth is that numbers and fonts are different to that era’s uniform and are, instead, identical to the uniform made for Syracuse aside from small aesthetic changes like the collar and any logos.

As it does with most things, the fault lies with Nike. The sportswear giant is the official uniform maker for both schools and this would hardly be the first time they’ve recycled a look for multiple schools. In fact, Nike often makes a standard uniform look that it then just changes the color on and spreads out across different schools, all under the guise of historical authenticity and inspiration.

The really sad part for Illinois is that they’re actually not wearing the same uniform as Syracuse. They’re wearing the uniform that Syracuse introduced in 2015 and has since discarded. Last season, Syracuse’s uniforms included fading stripes along the sleeves and additional lines along the pant legs.

In other words, Illinois is wearing the uniforms that Syracuse has already moved on from. They’re wearing Syracuse’s hand-me-downs.

Ultimately, no one cares about the uniforms if you’re winning football games. But until then, expect a whole lot of “Wait, why is Syracuse on BTN” jokes to come your way, Illini fans.