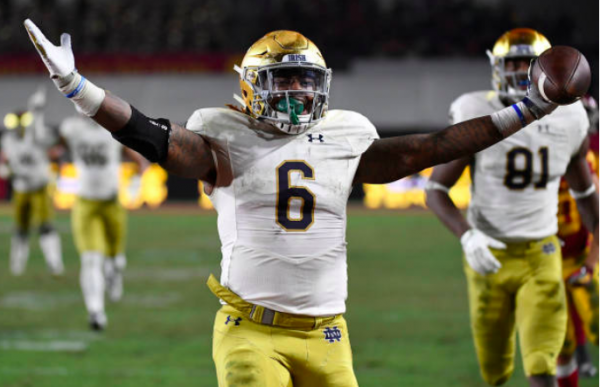 For the first time in the five-year history of the College Football Playoff, the Notre Dame Fighting Irish will be participating. Notre Dame has had good, ranked teams twice in the Playoff era — the Irish were in the Top 10 in November in 2016 — but this program has never competed in the CFP. Barring any shocking decisions by the selection committee a next Sunday, that will change this December. The Irish completed a perfect regular season with a 24-17 victory over USC on Saturday night.

Notre Dame started this game off slow, and it looked like we might have some chaos on our hands. USC came out of the gates fast, moving the ball seemingly at will. The Trojans capped off their opening drive with a touchdown to take an early 7-0 lead. With the Irish unable to do much on offense early and appearing listless, we had to wonder if the Irish’s Playoff dream was just not meant to be.

USC mistakes, though, kept Notre Dame in the game early. The Trojans fumbled on their second drive, and couldn’t punch their third into the end zone. But after that, it seemed like USC’s spirit started to break. The game changed after that drive, and it was all Irish from then on. Notre Dame suddenly started to move the ball, consistently, and USC just stopped. The Irish didn’t get points on all of their drives from then on, but they weren’t getting beaten back consistently anymore. USC actually did a good job bottling the running game up all night. However, Ian Book was able to find his receivers and exploit mismatches in the secondary the rest of the game.

The Irish scored a touchdown late in the first half to cut USC’s lead to 10-7. The Trojans followed that up with an extended drive, but it again ended in a fumble by a wide receiver. After that, USC’s offensive spirit seemed to be broken for good.

Notre Dame’s offense wasn’t superb in the second half, either, but it did enough. The Irish put together three scoring drives and managed to keep their defense off the field too much. USC finally managed to put together a fast, strong drive after Notre Dame was up 24-10, but it was too late. The onside kick failed, and Notre Dame took three knees to go 12-0.

Like many games this season (don’t even mention Ball State to a Notre Dame fan), it wasn’t particularly pretty. The Irish’s resume took a huge hit on Saturday with big losses by Michigan and Pitt, but it won’t matter. 12-0, against a good schedule, is enough. The Irish have quality wins over Michigan, Syracuse, and Northwestern, along with a solid win over Stanford. People might argue that Ohio State or Oklahoma deserve a shot over the Irish because of Conference Championship Games, but that claim won’t hold up. Notre Dame is in the Playoff.