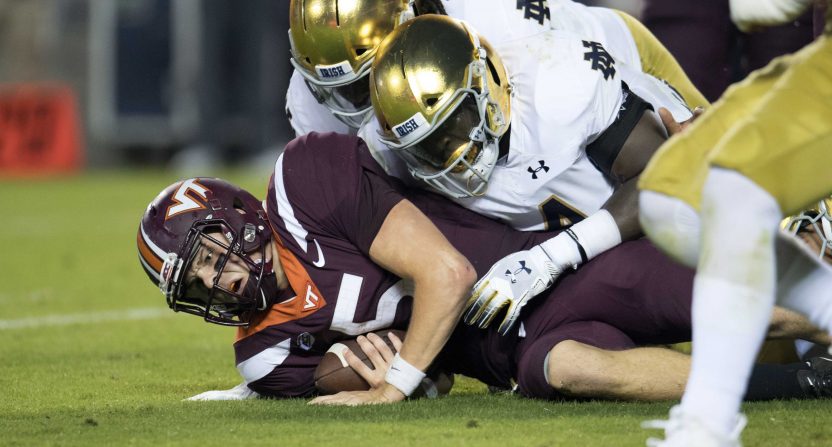 If you were hoping Virginia Tech would feed off the energy of a night game in Lane Stadium to begin derailing Notre Dame’s playoff hopes, you were out of luck on Saturday night.

Notre Dame used big plays and capitalized on Virginia Tech’s mistakes to get out of Blacksburg with a 38-23 victory. And with the upcoming schedule, the conventional wisdom suggests there could be little standing in the way of the Irish and a potential playoff berth at the end of the season.

Whether you want to or not, you’re going to have to take discussing Notre Dame and the College Football Playoff seriously until the Irish lose. No matter what scenario you can cook up, it’ very likely a 12-0 Notre Dame team would be selected for one of the top four spots in the College Football Playoff selection committee’s rankings, or so we assume. Notre Dame will have to hope the resume looks as strong when the committee begins working as it does now. It didn’t hurt that a handful of teams within the top 10 took losses on Saturday, including previously unbeaten teams like Oklahoma and LSU, both of whom were ranked ahead of the Irish.

Notre Dame has three wins against ranked opponents: a season-opener at home against Michigan, a home blowout of Stanford, and a road blowout at Virginia Tech. But the Hokies will fall out of the polls on Sunday and Michigan is about to embark on a pivotal three-game stretch that will include games against Wisconsin, Michigan State, and Penn State. What happens if the Wolverines drop two of those games, or all three? That drops another top 25 team from the Notre Dame resume. And there’s always a chance Stanford could stumble and take a tumble as well.

But for now, speculation is really just a waste of time. On the first weekend in October, nobody has clinched a spot in the playoff and nobody possibly could. There are far too many variables in play at this point in time, and worrying about various playoff scenarios and debates is useless, especially before we even see the first batch of playoff rankings at the end of the month. But Notre Dame has a clear path right in front of them.

If Notre Dame continues to play as well defensively as they have and the offense continues to thrive since the quarterback change, then Notre Dame will be favored in each of their remaining games. Win, and they’ll be in.

There are some hurdles still to clear. Pitt comes to Notre Dame Stadium next week and the Panthers have a recent history of upsetting playoff contenders (Miami last year, Clemson and Penn State in 2016), and the Irish are well aware of what damage Pitt can do. After that is a road trip to San Diego to play Navy. A game in Yankee Stadium against the same Syracuse team that gave Clemson a fight? A regular-season finale at USC?

Notre Dame has the look of a playoff team, but there are two questions left to answer. Can the Irish run the table? If they do, will there be any legitimate concerns about their resume?

For now, Irish eyes are smiling, and for good reason.