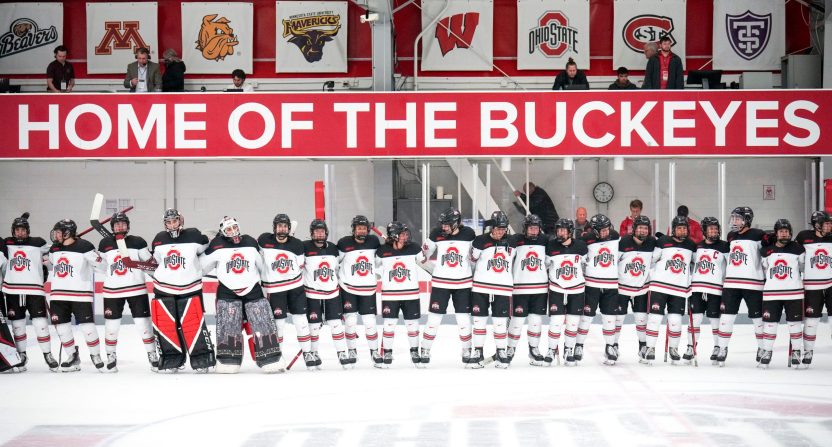 The college men’s hockey world was rocked Tuesday night when Michigan State Spartans forward Jagger Joshua revealed an unnamed Ohio State Buckeyes player of used a racial slur against him multiple times during a game earlier in the month.

Acts of racism do not belong in hockey.. pic.twitter.com/nm9AnIjSgV

“On Nov. 11th in our game against Ohio State,” the statement reads in part, “One of their players called me a racial slur multiple times. One of the officials heard the slur and gave the player a game misconduct penalty.There was an investigation by the Big Ten in the days after the incident, but no further public action has been taken by the Big Ten Conference or Ohio State.

“The inaction has left me feeling confused and pessimistic about the movement of diversity within hockey culture.”

According to the game’s box score, Ohio State forward Kamil Sadlocha was the only player in that game penalized for game misconduct.

Ohio State was quick to release a statement on why no further punishment befell Sadlocha:

“The Ohio State Department of Athletics and men’s hockey program worked collaboratively with the Big Ten Conference to come to a resolution in response to the allegation of misconduct toward the Big Ten sportsmanship policy,” the statement read in part.

The college sports world was quick to blast the university for its perceived non-statement of a statement:

This is an unacceptable response from @OhioStAthletics. Despite there being a whole mess of words there, it says absolutely nothing.

It is beyond frustrating and disappointing that the athletic department could not come out with a stronger response to this situation. https://t.co/7VoKXzbhMw

The NU DogHouse fully supports Jagger Joshua and his fight against the inappropriate statement(s) made by an Ohio State player.

This incident and inaction by Ohio State and Big Ten is unacceptable.

Acts of racism absolutely do not belong in hockey. https://t.co/H78nYo5Es5

So absolutely nothing was done. @OhioStAthletics condones racism and not a single person is surprised https://t.co/KfoJ5vNBky

The Ohio State men’s hockey team is next in action Friday when faces Long Island Sharks on the road.