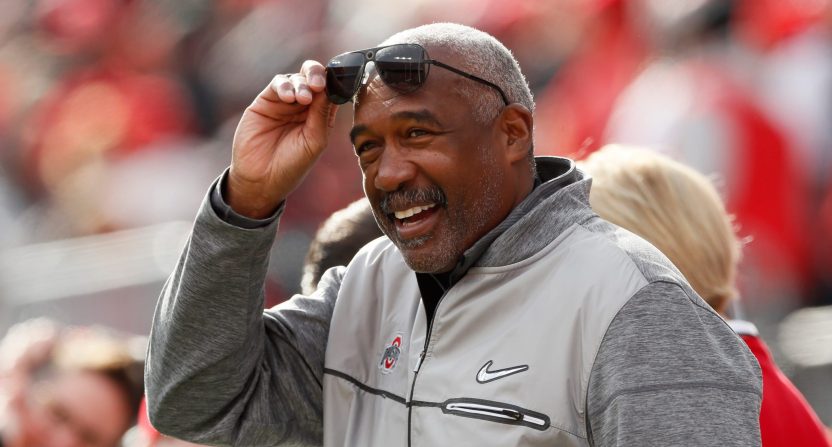 The name of the game for schools like Ohio State is figuring out how to compete with the juggernauts of the SEC and find ways to gain competitive advantages whenever possible. The most obvious way you can do so is to gain a home-field advantage when possible. However, according to Ohio State AD Gene Smith, that’s not as important as you’d think.

The never-ending debate around when college football will expand the College Football Playoff continues even as those in power decided to punt that decision down the road. It’s not a question of ‘if’ but ‘when’ as well as how many teams the playoff will eventually expand to. The smart money is on the playoff eventually getting to 12 teams eventually and, if that’s the case, it means that there’s a decent chance that schools will end up hosting CFP games in their home stadiums rather than using existing bowl games.

On paper, the idea of the Ohio State Buckeyes hosting an SEC school like the Alabama Crimson Tide or Georgia Bulldogs in Ohio Stadium in late December seems ideal. OSU is used to playing in the elements and they could use the cold weather to their advantage against Southern schools that would be out of their element.

While the Buckeyes seemed to feel as though snow worked against them in their loss to Michigan this past season, surely they’re still much better off using that to their advantage against a school with little to no experience playing in it.

However, when Smith was asked about it during a media call on Wednesday, he said that OSU’s preference in that situation would be to play the game in nearby Indianapolis instead.

Gene Smith said that if Ohio State is selected to host a College Football Playoff game in the future, he would recommend playing indoors in Indianapolis rather than playing in Ohio Stadium. Thinks it would be better for the team not to have to play in bad weather.

While playing the domed stadium in Indy might make sense from the standpoint of ensuring the game is played under good conditions, it certainly seems to undercut any advantage that the Buckeyes might have gained. If the shoe was on the other foot and they had to travel to Bryant-Denny Stadium or to The Swamp, they almost certainly wouldn’t be afforded the same luxury of being offered a neutral site instead.

This curious assessment of the situation certainly caught the attention of the college football world on Twitter.

Ohio State's opponent will support this as well. https://t.co/reTNWOujNd

Nahhhh, let’s have those southern teams come up here in December. https://t.co/Kh7CEEnjhC

I get that Ohio State is a pass-first team now, but can't wrap my head around why it would be better not to play at Ohio Stadium against any opponent. https://t.co/VDS6KTS8JW

The one true Sun Belt team in the Big Ten: https://t.co/weMZ2YzaXh

It’ll be interesting to see if Smith takes flak for the comments, especially from Ohio State folks, or if people agree that it’s a worthy sacrifice in order to ensure the game can be played as intended.