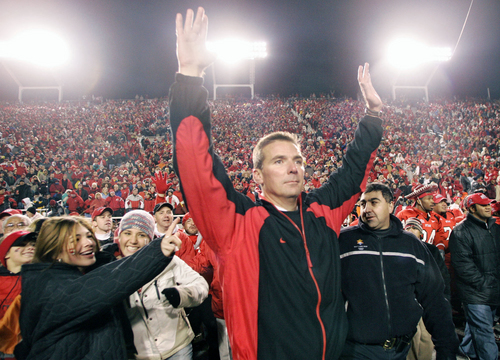 Seldom do big-time matchups live up to the hype, but we got every bit of what we wished for and more in Madison. Ohio State and Wisconsin played an instant classic, with Ohio State escaping with a hard-fought win in OT.

There are going to be some busy athletic training personnel in both Madison and Columbus tomorrow morning and through the week. Why? Because the Buckeyes and Badgers just played a Donnybrook known in the heartland as Big Ten football.

You knew it was going to be a big britches affair with both defenses hanging around at the top of many of the national rankings, and that’s exactly what we got. What we didn’t expect was for Wisconsin to find offense that it often left on the bus up until this point of the season.

The Badgers came out of a bye week with some new wrinkles that hadn’t been seen in Madison since the before Barry Alvarez started stomping around Camp Randall.

It was a brilliant game plan set up by head coach Paul Chryst, using a mixture of jet-sweeps, screen passes and quarterback roll-outs to rack up over 300 yards of offense against a shell-shocked Ohio State defense in the first half.

The Badgers led 16-6 at half-time and it looked like all the momentum was headed the way of Bucky and The Fifth Quarter.

But this is Ohio State, led by one of the greatest coaches of our generation. At half-time, Urban Meyer and defensive coaches Greg Schiano and Luke Fickell made some adjustments, and the defensive players ate nails, got stops, and held the Badgers to just eleven yards in the third qurater.

On offense, the OSU offense matched the toughness Wisconsin had shown all game by converting two key fourth-down attempts and finally, mercifully, wrestled the lead away from the Badgers 20-16 early in the fourth quarter with a clutch J.T. Barrett pass to Noah Brown.

But we all knew Bucky wouldn’t go quietly into the Wisconsin night.

Not to be outdone, quarterback Alex Hornibrook and the Wisconsin offense went on an eleven play, 81-yard drive that took a grueling 6:15 off the clock, capping it off with a 4-yard touchdown run by Austin Ramesh — completing the first rushing touchdown against Ohio State all year.

Ohio State managed to kick a field goal to tie it up, and off to OT we went to set the stage for a finish many Buckeye and Badger fans will remember for years to come.

Ohio State lost the toss and got the first shot in OT, and despite two huge penalties to put them behind the chains, converted a couple of third downs and then used play-action on another third-down to strike first.

Wisconsin quickly drove down to the four yard line on its ensuing posession, but Ohio State stiffened to force a fourth down, and then sealed it, fittingly with a defensive stand.

It was a fitting end to an old-school Big Ten contest, and one that Ohio State is downright giddy about. Coming out of Madison with a win is never, ever easy. It was a bruised and battered win, but a win nonetheless.

If we’ve seen anything this season, it’s that sometimes you just have to survive and live to fight another day. It’s now off to Happy Valley for another road contest where the environment should be just as crazy and wild as tonight.