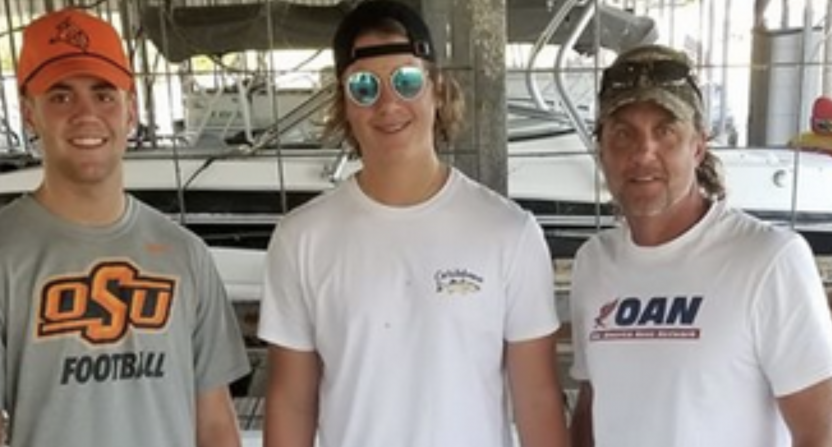 Mike Gundy’s appreciation of extreme right-wing media hasn’t been a secret. A couple of months ago, Gundy called OAN “refreshing” for its take on news and mainstream media. It should be noted that OAN, in their blind loyalty of President Donald Trump and the various conspiracy theories that make the president look great, is politically positioned so far right, they make Fox News look like MSNBC.

Over the last several weeks, nationwide protests against police brutality have taken place to the point that college coaches who previously held particular views have either changed those views or are facing pushback for maintaining those views.

So after being photographed wearing an OAN shirt while fishing at Lake Texoma, two of Gundy’s most prominent and best Oklahoma State players have had enough of their coach for where he gets his news.

Oklahoma State running back Chuba Hubbard — the Big 12 Offensive Player of the Year in 2019 and a 2020 Heisman candidate —  tweeted, “I will not stand for this.. This is completely insensitive to everything going on in society, and it’s unacceptable. I will not be doing anything with Oklahoma State until things CHANGE.”

I will not stand for this.. This is completely insensitive to everything going on in society, and it’s unacceptable. I will not be doing anything with Oklahoma State until things CHANGE. https://t.co/psxPn4Khoq

All-Big 12 linebacker Amen Ogbongbemiga responded in support of Hubbard with, “I stand with him!”

I stand with him! https://t.co/WWOs2ALxml

Offensive lineman Tevin Jenkins also responded, letting it be known that the offensive line is with Hubbard.

As an O-line we stand and support Chuba https://t.co/5zau9yTpCF

There’s something to be said about college being a place to be challenged. In my college experience, I probably learned more from professors who had opposing viewpoints because they taught me to not only question authority, but that I needed to understand and challenge those viewpoints to better understand my own point of view.

That being said, there are limits and OAN is a network where extreme conservatives go to when they think Fox News is too liberal. Yes, it’s merely a shirt, but if Gundy loves the propaganda on that channel, what else does he believe that we don’t know about that’s much, much worse?

At the same time, if you think about it, whether this is based on recent events throughout the country or it’s been an ongoing issue with the head coach and the shirt was the final straw or a combination of the two, more and more collegiate athletes are speaking up and making their voices heard.

Update: Mike Gundy and Chuba Hubbard released a video in response to the tweet of Gundy wearing the OAN t-shirt (and the response that caused).

Gundy said that he met with some players “and realized it’s a very sensitive issue with what’s going on in today’s society.” He added that he’s looking forward to “making some changes.”

Hubbard said that “from now on we’re going to focus on making change, and that’s the most important thing.”

Change is coming I promise you that. pic.twitter.com/wTGHtByh3N

Additionally, Amen Ogbongbemiga tweeted about creating some “serious CHANGE around Oklahoma State,” and that the players have “all agreed” to resume workouts and activities.

By voicing our opinion we are happy to have came to a conclusion and opened a gateway to create some serious CHANGE around Oklahoma State. My teammates and I have all agreed we will go ahead and resume all workouts and activities. We’re all in this together✊🏾

Earlier, Oklahoma State athletic director Mike Holder released a statement saying that today has been “very disturbing,” and “the tweets from the current and former players are of grave concern.”

Oklahoma State athletic director Mike Holder statement: “This afternoon has been very disturbing. The tweets from the current and former players are of grave concern.”