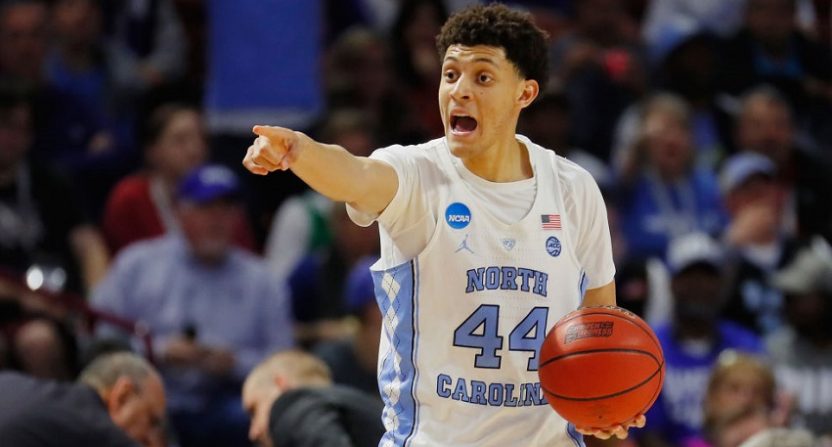 The 2017 NCAA Tournament has been rather surprising, with brackets largely busted and a Final Four that virtually no one saw coming. March Madness has also provided some spectacular individual play.

With relatively unknown programs like South Carolina and Oregon joining two No. 1 seeds — Gonzaga and North Carolina — this year’s Final Four promises to be full of intrigue and personal stories. There’s a big man stepping up due to injury, a point guard who is proving doubters wrong and even the best beard to ever appear in the NCAA Tournament.

What else is there that couldn’t be loved about the Bulldogs, Ducks, Gamecocks and Tar Heels going into Saturday’s national semifinals at Phoenix? Nothing. Nothing is the right answer and it has a lot to do with some ridiculous talent that will be on display this weekend.

As we head towards the weekend, here are the best players still balling out in the desert.

If there is an award for Mr. Do-It-All-Good-But-Not-Great, then Gonzaga senior forward Johnathan Williams wins that award hands down. He’s just good enough at scoring, dishing, rebounding and blocking shots to gain your attention, but he’s also not great at any one thing in particular. Williams averages 10.3 points, 6.6 rebounds and can step beyond the three-point line when needed (15-for-37 this season). Those numbers are good, but not great.

That’s not to say Williams can’t be a game-changer. Anyone who saw the Xavier game, in which he put up 19 points on 8-of-12 shooting, had eight boards, three blocks and two steals, saw his raw potential come to a head. Can he do more of that in the Final Four? If so, then Gonzaga is going to be real trouble for the rest of this group.

Many wondered out loud how Oregon was going to survive the NCAA Tournament without its best defensive enforcer, Chris Boucher. Enter Jordan Bell, who has gone from athletic freak to one of the most important parts in Oregon’s run to the Final Four. Simply put, the Ducks aren’t in the Final Four without his school-record eight blocks against Kansas and becoming a rebounding machine.

He may not score a ton (just 10.9 per game), but again, that hasn’t been the case in this tournament. As good as Tyler Dorsey and Dillon Brooks have been, Bell won Most Outstanding Player in the Midwest Region, averaging 12.5 points, 12.5 rebounds and three blocks during Oregon’s run to the Final Four.

Clearly, teams are going to have to scheme against him and that is a big credit for a veteran role player stepping up when his team needed him the most.

If there is an award for the most improved stat line of all the players left in the tournament, Dozier is that man. The Gamecocks’ sophomore floor general improved in just about every major stat category this season, leading him to average 13.8 points, 4.7 rebounds and 2.8 assists per game. Dozier also improved his three-point shooting (29.7 percent from 21.3 percent) and is shooting 40.6 percent from the field on the season.

Let’s just say the former McDonald’s All-American is finally living up to his potential. You know, just in time for South Carolina to make a historic run to the Final Four. With more of what has happened in the tourney (15.3 points, 3.3 rebounds and 2.5 assists), Dozier may be done with college ball by the end of the tournament.

Few guards in this tournament are as dangerous as Berry can be. His ability to take players off the dribble, make defenders think he’s driving to the basket, then pop up for a mid-range jumper and hit from deep is impressive. Berry comes into this game averaging 14.6 points, 3.6 assists and 3.1 rebounds. Oh, and he hits 39 percent of his three-pointers as well.

But there’s a major question afoot (no pun intended) for Berry: Is he healthy enough to lead his team to the national championship? He did tweak both of his ankles this past weekend. If he is closer to 100 percent than 60 percent, the Tar Heels have a really good chance, thanks to this floor general. This ranking would also be higher if we had a real idea of his health leading up to the Final Four.

Don’t let the balding big man fool you — Karnowski isn’t 30 years old. He’s just got one of the best beards in NCAA Tournament history and one of the most dangerous post games left in the tourney this year. When you shoot 60 percent from the field and average 12.2 points a season after a career-threatening back surgery, you’re doing something right.

No player left in the tournament has a better knack for playing with his back to the basket, whether it is setting up defenders for a velvety-good hook shot or passing out of the post. He’s the darling of the casual fan in this Final Four grouping, no doubt about that.

There may not be a more deadly individual player to have taken the court in the 2017 NCAA Tournament that Dorsey. Highlight reels for this tournament so far likely contain plenty of his daggers from deep. Dorsey has lit this year’s NCAAs on fire, averaging 24.5 points and shooting 69.1 percent from beyond the arc. Those are ridiculous numbers, but only tell one part of the story.

He also hit game-winners against Rhode Island in the second round and Michigan in the Sweet 16.

So why isn’t Dorsey higher on this list? Well… if only he could also play defense. He’s been far more of a one-trick pony than the players in front of him, and until he can improve his defensive play, it is hard to put him higher on this list.

Dorsey may be the star and Bell the glue in the middle, but Brooks is Oregon’s best overall player and it isn’t even close. There’s a reason the 6-foot-5 forward won the Pac-12 Player of the Year award, and that is because of his consistency throughout the season. He comes in averaging a healthy 16.3 points, 3.1 rebounds and 2.8 assists on the season.

Brooks has been a revelation from beyond the arc, upping his three-point shooting percentage from 33.8 to 41 percent and hitting a career-high 57 triples. What holds him back for me is his penchant for my biggest pet-peeve in college basketball: flopping.

I applaud the motor, but Brooks has to be one of the worst floppers in the game today. It’s a shame, because it sometimes gets himself into needless foul trouble and allows opponents to get under his skin. When the emotions are in check, few are better one-on-one in this Final Four.

If there is one player who is better one-on-one in this tournament than Brooks, South Carolina’s Sindarius Thornwell is that player. The 6-foot-5 “guard” has the handles and the vision of a smaller player and the physicality of someone a few inches taller. Continuing with the theme, Thornwell was also his league’s Player of the Year (SEC) as he is averaging a ridiculous 21.6 points, 7.2 rebounds, 2.8 assists and 2.2 steals per game.

Every team in the NCAA Tournament has thrown its best defensive player at Thornwell, and all have failed badly. He has averaged 27.8 points, 7.5 rebounds and is shooting 50 percent from the field. What may be most frightening is that Thornwell and the Gamecocks only get better as the defense locks teams down later in the game.

Are there players with more hype around them in the Final Four? Sure. However, there’s a reason the Zags didn’t choke like they seemingly always do come March, and Williams-Goss is that reason.

In what some may see as the year of the point guard in college basketball, NWG has largely gone under the radar. But with a quick watch of the NCAA Tournament, you see why he was the West Coast Conference Player of the Year. Going for a stat line like this — 16.7 points, 5.9 rebounds, 4.6 assists and 1.8 steals per game — also has a lot to do with his position on this list. If Gonzaga is going to get to the national title game, look for NWG to have a ton to do with it.

You think his transfer from Washington to Gonzaga was the right move?

Jackson was just named to the AP’s first team All-American list and is the only player left in the tournament amongst those five players. Averaging a career-high 18.2 points 4.7 rebounds and 2.8 assists per game will do that. So will being a versatile forward who provides plenty of matchup nightmares. Jackson has been even better in the NCAA Tournament — averaging 19.7 points, 3.8 rebounds, 4.3 assists and shooting 46.8 percent from the field.

While UNC is no doubt more than just Jackson, there’s also no denying his versatility, vision and experience has been a large part of the reason this team is in the Final Four in Phoenix. Having a big man who can shoot mid-range jumpers, three-pointers and take the ball to the hole certainly creates matchup nightmares. That’s exactly what Jackson does.