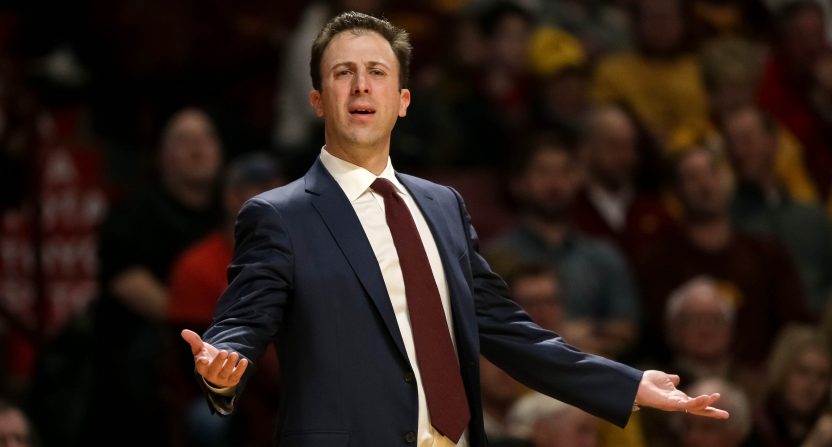 The 2018-19 college basketball season starts next month. Here’s a look at the major conference coaches who might be on the hot seat…

Danny Manning has taken two schools to the NCAA tournament (Tulsa and Wake Forest). But time might be running out. He’s had a losing record in all but one season. That one year, he went 19-14, guiding the Demon Deacons to the NCAA play-in game. Coaching in the ACC is brutal and getting recruits when you’re the fourth best conference program in the state is a thankless task. Still, Manning was supposed to be the guy who would quickly elevate Wake to near the top of the league’s second tier. Instead, Wake went 11-20 last year and was the ACC’s second worst program behind hapless Pittsburgh. Right now, Manning doesn’t seem to be appreciably better than Jeff Bzdelik.

This season, Wake must overcome the surprising departures of Bryant Crawford and Doral Moore who both turned pro early and then went undrafted. Manning’s best hope is that his highly touted recruiting class pays immediate dividends. Freshman wing Jaylen Hoard could be an eventual NBA lottery pick. He’ll be counted on early because there are only four returning scholarship players. Wake did add graduate transfers forward Ikenna Smart (Buffalo) and guard Torry Johnson (Northern Arizona).

This could be the beginning of the end for Manning.

This hire was justifiably mocked when Mullin returned to his alma mater in 2015. It seemed like a desperate grasp at nostalgia, especially since Mullin had no previous coaching experience at any level. We now enter year four of this experiment with no postseason berths. There are some reasons for optimism. The Red Storm’s record has improved every year, going from 8-24, to 14-19, to 16-17. This season’s team has a legitimate shot to make the NCAA tournament. Mullin has three returning starters, including the Big East’s leading scorer Shamorie Ponds (21.6 points per game). Ponds fueled one of the best stretches in recent memory when he scored 33 points to beat No. 4 Duke, and three days later, he tallied 26 points to knock off No. 1 Villanova.

St. John’s also got some additional good news last week when Auburn transfer Mustapha Heron (16.4 points, 5.3 rebounds, 1.2 steals) was ruled immediately eligible for this season. This could give the Red Storm the best 1-2 punch in the Big East. This will be the most talented team Mullin has ever had. The league is in transition with Villanova reloading and a new coach at Xavier. Anything short of an NCAA trip will be a major disappointment. If St. John’s doesn’t make the NCAAs, new athletic director Mike Cragg will have to make his first major decision.

Warts and all, we know Rick Pitino can coach: two national championships at two different schools, three Final Fours appearances with three different schools. Do we know if his son can coach? Richard Pitino’s résumé consists of one season at Florida International where the Panthers made a surprise run to the 2013 Sun Belt tournament title game (slow golf clap), and five seasons of mediocrity (.536 winning percentage) at a mediocre Big Ten program. By comparison, Pitino’s predecessor Tubby Smith was vastly more successful in his six years at Minnesota, with three NCAA trips in six seasons and a .605 winning percentage. If Richard Pitino’s last name with Johnson, he likely wouldn’t have even been hired at Minnesota.

We haven’t even mentioned some of the off-the-court issues that have plagued his program.

In an unofficial Big Ten media poll, Minnesota is picked to finish ninth in the 14-team league. The Golden Gophers should be helped by the healthy return of some key players like guards Amir Coffey (shoulder) and Dupree McBrayer (leg). Top incoming recruit, freshman center Daniel Oturu, had shoulder surgery in the spring but is expected to be ready. But will good health be enough to save Pitino?

This one seems obvious. If Pitino has his third losing season in four years, he won’t survive.

There was a time when Brad Stevens and Shaka Smart were the two hottest young coaches in America. While the former has made a successful transition to the NBA, the later has been underwhelming. Smart hasn’t been able to recreate the magic he made at VCU. This is surprising given Texas’ financial resources and the wealth of in-state talent. The Texas administration got tired of Rick Barnes and Smart was supposed close the gap on habitual conference champion Kansas. Instead, last year the Longhorns were arguably the fourth-best Texas school in their own league behind Texas Tech, TCU, and Baylor. They had Mo Bamba, the sixth overall pick in the draft, and managed to go 8-10 in league play.

This cannot continue if Smart wants to keep his job. He got a $22 million guaranteed contract in 2015 and has yet to produce an NCAA victory. Texas has a strong recruiting class and could be picked among the top four teams. The youngsters include guard Courtney Ramey, wing Gerald Liddell, and forward Kamaka Hepa. They’ll join super freaky athletic guard Kerwin Roach II and post player Dylan Osetkowski.

Smart needs a solid regular-season and some NCAA tournament wins.

No major-conference coach with a .672 winning percentage is more disliked by the fan base than Steve Alford. He’s basically been on the hot seat since he was the surprise choice to succeed Ben Howland. And Howland was axed after a .685 winning percentage and three straight Final Four trip during his 10-year run. He was fired a year after going 25-10?!?

Alford’s unpopularity means that every year he seems to coaching for his job. His 31-5 record with Lonzo Ball and T.J. Leaf bought him some time. But if Alford repeats last year’s misery — 21-12 with a play-in game loss to (egads) St. Bonaventure — he probably will be ousted.

UCLA is picked to finish second in the Pac-12. This is the highest preseason ranking since Alford’s first season in 2013-14. The Bruins have two returning starters in Kris Wilkes and Jaylen Hands. They also have some injury concerns. Freshman power forward Shareef O’Neal will miss the season with a heart ailment. Also, freshman point guard Tyger Campbell suffered a season-ending torn knee ligament. These give Alford a legit excuse if UCLA stumbles early. Still, when you’re the coach at UCLA, you’re expected to win now and win big.

Generally speaking, most of the SEC coaches seem to be safe. The league enjoyed a conference-record eight NCAA bids. Not bad for a bunch of football schools. You could argue that the coaching in the SEC has never been better from top to bottom. So, Mike Anderson probably isn’t in serious trouble, but he probably can’t afford to have a lousy season. Yes, even with that tw0-year contract extension. Anderson has been solid but not spectacular since returning to Arkansas where he was an assistant for the legendary Nolan Richardson. Anderson has a pair of NCAA victories and has reached the tournament the past two seasons. But Arkansas used to be a national program once upon a time. It hasn’t even reached the NCAA Sweet 16 since 1996.

The bad news for Anderson is that this will be a rebuilding season. Five of his six top scorers from last season are gone, including two players transferring out: freshman Darious Hall and sophomore C.J. Jones. Sophomore 6-11 forward Daniel Gafford is back and is projected to be a lottery pick. Anderson has a built-in excuse if the Razorbacks live down to expectations, but he could help himself with a strong year.