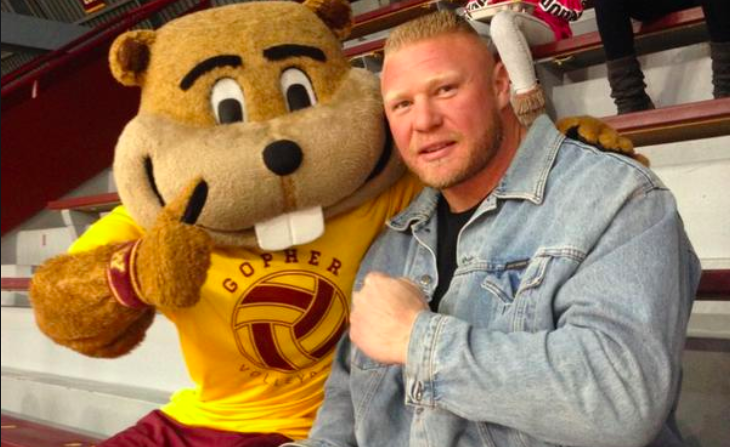 We’ve only had Rick Pitino back in college basketball for a few weeks and, perhaps expectedly, he’s already making waves.

First, Pitino locked down not but two highly touted recruits for the Iona Gaels over the weekend, snagging commitments from 2021 prospects Kenard Richardson and Ilechi Chantilou.

Source: 2021 prospect Kenard Richardson has committed to Iona. Two in one day for the Gaels. https://t.co/i7LyULxVV4

Second, Pitino seems to have secured a solid non-conference game for the Gaels this season (if it happens). You might have presumed that Iona would schedule the Minnesota Golden Gophers given that the Big Ten squad is coached by Richard Pitino, Rick’s son. However, any presumption that the game will take place in Minneapolis by default appear to be wrong. Instead, the Pitino’s appear to be settling that decision based on, of all things, the outcome of tonight’s WrestleMania match for the WWE title between Brock Lesnar and Drew McIntyre.

It started when grandpa Pitino tweeted out photos of his Minnesota-based grandkids getting ready for this weekend’s WrestleMania extravaganza.

When Richard quote-tweeted that, grandpa upped the ante and turned it into a bet. If Brock Lesnar wins, the Gophers will play at Iona. And if McIntyre wins, the Gaels will travel to Minnesota.

If @BrockLesnar wins, you guys play at Iona next year. If @DMcIntyreWWE wins, we’ll play at the Barn.

However, Richard flipped it because he couldn’t in good conscious root against Lesnar, who wrestled for the University of Minnesota before his WWE and UFC days.

How about you reverse that and it’s a deal. Can’t root against a Gopher https://t.co/9jrj5FJ5AX

And lest you think this is all just for giggles, Richard Pitino mostly-sorta confirmed it’s legit later on.

So there you go. If you are a Minnesota or Iona basketball fan who is also a big pro wrestling fan, tonight’s battle between Brock and Drew is going to be worth a whole lot more than you even realized. Forget the WWE title, this is about Qaundrant 1 scheduling now.