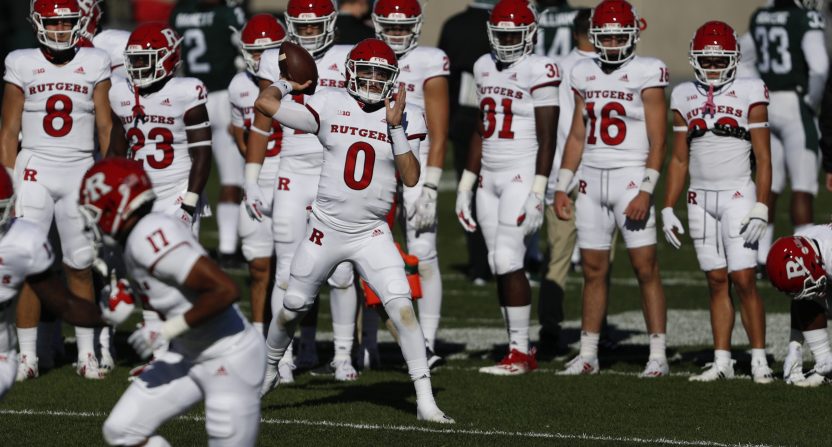 Of the many things college football fans have been looking forward to with the return of the Big Ten, Rutgers football was not chief among them. However, given the way the first quarter went in their game today against the Michigan State Spartans, perhaps the Scarlet Knights were the behemoth in waiting we didn’t know we needed.*

The Scarlet Knights got things going perfectly, as they marched down the field in ten plays, capping the 75-yard drive with an Isaih Pacheco touchdown run.

Michigan State, meanwhile, started making it’s life hard very early, with a fumble on the ensuing drive that gave the ball right back.

Rutgers didn’t capitalize but they did pin Michigan State back near their goal line, which is where they picked up turnover No. 2 on a fumble by quarterback Rocky Lombardi.

How about this @RFootball start?

Two turnovers, two touchdowns, and it's 14-0 in East Lansing. pic.twitter.com/jLzJg2OOWd

Rutgers QB Johnny Langan then punched in the second touchdown of the day to make it 14-0. That was cause for celebration on the Scarlet Knights sidelines, though they should consider taking it a little easy with the helmet-to-skull contact.

The Spartans were able to get on the board before the end of the first quarter with a 50-yard touchdown pass from Lombardi to Jayden Reed, cutting the Rutgers lead in half. However, the second quarter saw much of the same from the Knights. They added their third turnover on the day with an interception by Trey Avery.

And that set up touchdown No. 3, a quarterback scamper by Noah Vedral that made the score 21-7, breaking the spirit of the Spartans pretty early on in the game.

Know what's greater? Turning those turnovers into points.@RFootball just did it for the second time today. pic.twitter.com/6DEKESa7rA

There’s certainly still a lot of football left to play, but so far, the Rutgers Scarlet Knights are playing like world-beaters. Is it time for “We Want Bama” signs in New Brunswick yet???