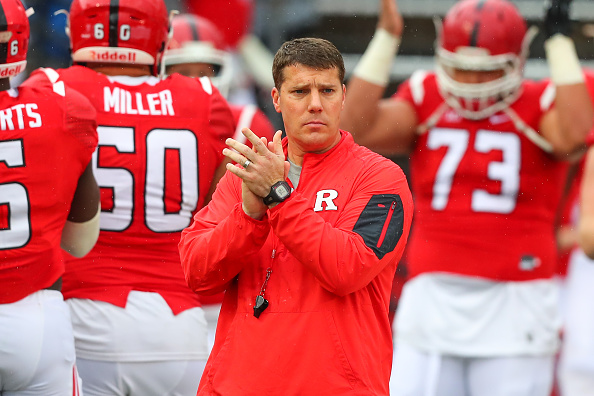 In the early parts of Friday’s matchup between the defending Pac-12 champion Washington Huskies and the bottom-dwelling Rutgers Scarlet Knights, something just felt wrong. After making a bowl game in its first season a member of the Big Ten, Rutgers football has been entrenched in scandal and schadenfreude ever since. The Scarlet Knights went a combined 6-18 (1-16 in the Big Ten) in 2015 and 2016.

And yet, they had a first quarter lead over a team that made the College Football Playoff while going 12-2 last year. Washington lost some pieces on both sides of the ball, of course. But the rising program has been building a talented depth chart since coach Chris Petersen arrived. They’re built to withstand losses.

Rutgers isn’t, at least not right now. Yet Louisville quarterback transfer Kyle Bolin led a 59-yard scoring drive to claim a touchdown advantage in Piscataway, N.J. The Scarlet Knights would hold the lead until a Washington touchdown with just under four minutes to go in the half provided a 10-7 advantage UW would never relinquish.

The game ended with Rutgers on the wrong end of a 30-14 defeat. That said, you could already start to see some of what coach Chris Ash is building for a program facing some very long odds in the difficult Big Ten East division.

Washington’s strength in 2016 came from having one of the country’s best all-around defensive units; a group that could stop the run or pass with equal aplomb, and a strong offense that could make the work even easier. The Huskies were a fiery pass-rushing team last season, amassing 40 sacks. In general, UW was able to manhandle many opponents in the trenches, combining speed and physicality few could match. Even Stanford, a team built for that sort of play, was completely run off the field by Washington in a 44-6 drubbing.

Even considering departures on the line (including NFL Draft pick tackle Elijah Quails), Rutgers still held their own against Washington’s size and speed advantage. The Huskies had just one sack on Friday night, after averaging nearly three per game during 2016. Rutgers’ 309 offensive yards weren’t setting the world on fire, but considering the talent disparity that should exist between these two teams, it was a bit of an accomplishment.

Ash seemed to agree after the game:

“In my opinion, we beat ourselves. It didn’t feel like there was a physical mismatch against a really good football team. There are some things we need to clean up before moving forward, but while I’m really disappointed, I’m happy about the fight and the toughness, the improvement that a lot of guys made.’’

Inserting Bolin, who threw for over 2,000 yards in his career before arriving at Rutgers, helps jump-start things a bit. But it’s far more than just the QB. Miami transfer running back Gus Edwards tallied 79 rushing yards in his debut with the Scarlet Knights. Three different wideouts — Damon Mitchell, Dacoven Bailey, Jerome Washington — had over 30 yards receiving. Seven different Rutgers defenders had at least four tackles.

The program brought back around 60 percent of its offensive production, hence the need for a a few transfers. However, 79 percent of the young defense’s output came back — one of the top 30 or so rates in the country. According to Bill Connelly’s two- and five-year recruiting rankings, results have dropped off a little in recent seasons, though the 2018 class is on track to bring in top 50-level talent once again. Even without a marquee, four- or five-star player yet, it’s a deep group of players predominantly from New Jersey and New York.

Those recruits will join the fray down the road. But right now, current players are also getting the benefit of one of the offseason’s best assistant hires as well. Former Minnesota head coach Jerry Kill was brought onto the Rutgers staff as the offensive coordinator and quarterbacks coach. The Scarlet Knights had one of the country’s worst offenses in 2016, and Kill could theoretically help turn that around.

Kill’s Golden Gophers squads were not particularly adept offensive teams, though his Northern Illinois teams were far better. Ash, who’s in his first head coaching job, was a defensive coordinator and seems to understand the need to counterbalance his skill set with someone more experienced on the other side of the football.

But that doesn’t mean he’ll be mimicking the more dynamic attack seen at his former employer Ohio State. Kill brings execution and structure to the offense; which could be a better fit than Ohio State’s attack built on speed and brute force up front. Rutgers just doesn’t have those athletes, and can’t rely on dreaming them up, either.

A two-touchdown loss to a top-10 team is not the same as victory. And it would be foolish to think that moral victories add up to much except missed opportunities. For at least a half this weekend, Rutgers showed they’re starting to find themselves a bit under Ash. That may not turn into major victories just yet. But you can see the gears moving toward Rutgers defining itself, at least, for the first time since Greg Schiano departed.