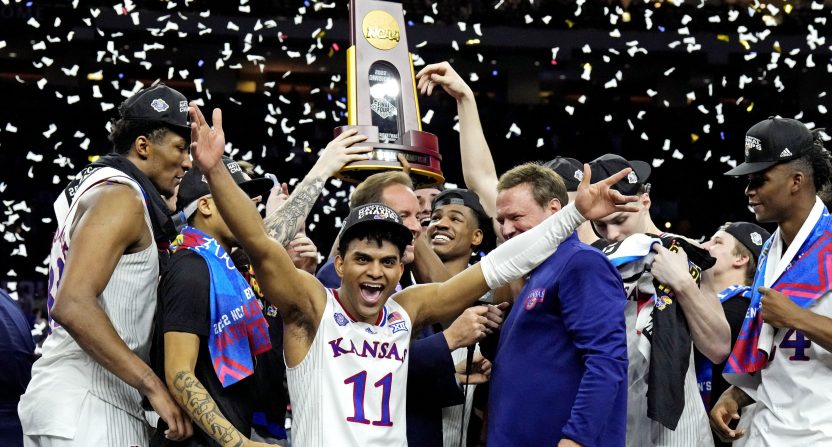 The Kansas Jayhawks are college basketball’s national champions, and they made a historic comeback to make it happen.

HAS A NICE RING TO IT 😁 pic.twitter.com/GR27MoPIpi

The Jayhawks outscored the Tar Heels 47-29 in the second half. Kansas got a team effort in the scoring department, with nobody scoring more than 15 points, but five players scoring at least 12 points (North Carolina had five players with at least 11 points and nobody with more than 15).

Defensively, Kansas held North Carolina to 31.5% from the field, including 5-of-24 shooting from Caleb Love (who scored 28 points on 11-of-20 shooting vs Duke in the Final Four).

It’s the fourth national title in Kansas men’s basketball history, and it’s the first one since 2008 (which also featured Bill Self as head coach).

Here’s how the sports world is reacting to the Jayhawks’ championship victory:

The Jayhawks scored 31 points on contested shots in the 2nd half, including both buckets from David McCormack in the final 90 seconds. pic.twitter.com/G7k46xC2n3

Entering today, North Carolina was 46-0 in the NCAA Tournament all-time when leading by double digits at the half, the longest streak by any team in NCAA Tournament history.

Biggest comeback in national title game history by Kansas. @TigerWoods appears poised to have everyone hold that beer at @TheMasters

Ready for perhaps the greatest #NantzAPalooza ever.

JAYHAWKS ARE THE LAST TEAM STANDING IN NOLA 🏆#NationalChampionship pic.twitter.com/TtdSlqQPt4

The 14-year wait is OVER for Kansas.

Jayhawks top North Carolina in a CLASSIC in New Orleans.

Bill Self is now 1 of 16 head coaches in men's basketball to win multiple national titles.