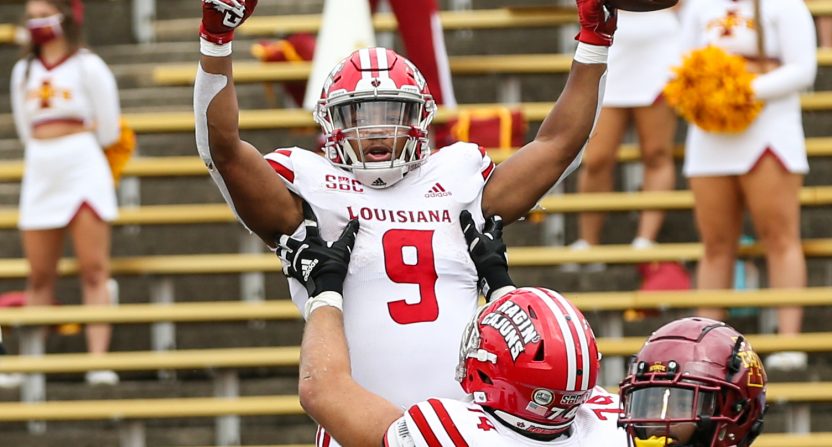 There’s been a lot of time, effort, and struggle in making sure that the Big 12 could play college football this season. Perhaps all of that would have been better served elsewhere because, based on the early Saturday results, Big 12 teams aren’t even good enough to beat Sun Belt teams this year.

Iowa State came into the day ranked No. 23 and looking to take care of business against a solid Louisiana-Lafayette opponent at home. Instead, Louisiana came away with a confident 31-14 victory that was not only the first upset of a Top 25 team this season but also the program’s first win over a Top 25 team since beating No. 25 Texas A&M in 1996. It was also their first win over a Power 5 program since 2008.

The Ragin' Cajuns not only upset No. 23 Iowa State in Ames; they did so by 17 points. Maybe they should've been favored! pic.twitter.com/6uDExNDv26

From a gambling standpoint, it was also a huge win for the program that confirmed why the initial spread of 28.5 points came all the way down to 11.5 before the game started. In other words, a lot of people thought that the Cajuns were better than Vegas initially thought and they were right.

One of the biggest keys to victory for Louisiana was special teams. The team got two kick returns for touchdowns, including a 95-yard kickoff return for a touchdown by Chris Smith and an 83-yard touchdown on a punt return by Eric Garror.

95 YARDS TO THE HOUSE 🏠 pic.twitter.com/P4z9h1VBfK

Kansas State fans might have smiled at the news that Iowa State lost at home to a Sun Belt team but that joy was short-lived as their Wildcats went and did the same thing a little while later, losing to Arkansas State, 35-31.

KSU looked like it might avoid the same fate, leading by three points with a little over two minutes to go. But then the Red Wolves rattled off a seven-play, 65-yard drive that culminated in Jonathan Adam’s third touchdown reception on the day.

Well, at least both Kansas State and Iowa State get a reprieve next week when they *checks notes* travel to play Oklahoma and TCU, respectively.