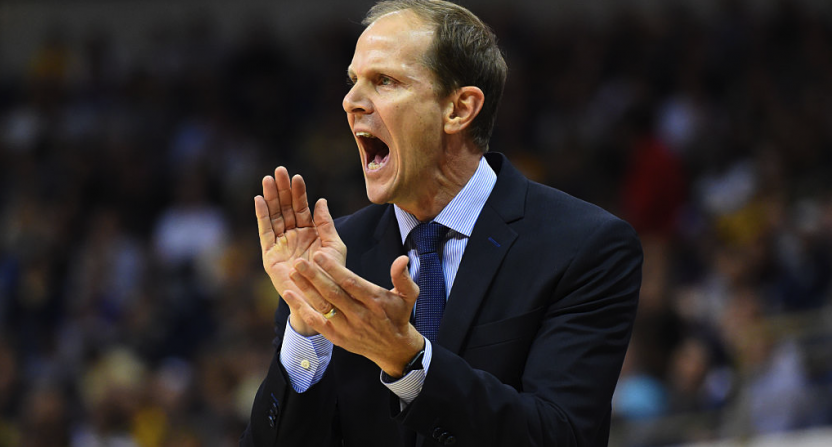 Hopkins was named the official successor to Hall of Fame Coach Jim Boeheim back in 2015. But there had been a frequent uneasiness about Hopkins’s status and ability to wait out the end of Boeheim’s long career. That’s what happens when you’re an assistant for 20 years and your boss is in no rush to leave (and you’re in no rush to make him leave).

He interviewed for the USC job in 2013, before it ended up going to Florida Gulf Coast’s Andy Enfield. In 2014, he was mentioned with the Boston College, California and Marquette jobs. He’s been tied to every other job in the Northeast too (UMass, St. John’s and more have come up).

Despite playing at SU from 1989-93, the California (Laguna Hills) native was always thought to have an eye back toward the West Coast. He also, rightfully, kept an eye on his career and where it was headed – specifically around the vague terms used to describe his eventual ascendance with the Orange.

During the 2015-16 season, Hopkins took over as interim coach at Syracuse for nine games during an NCAA-mandated suspension for Boeheim. It was the plan all along, but the NCAA changed the timeline late, turning what the staff thought was two weeks of handoff prep into mere hours.

Syracuse fans were riled up and worried about the stretch, in addition to Hopkins’s abilities for the future. Some detractors got even louder when Boeheim returned and promptly led Syracuse to an improbable Final Four.

That Final Four created more questions around Boeheim’s timeline. There were always doubts about when the coach would call it quits. The announcement naming Hopkins his successor said (in 2015) that Jim was done at the close of the 2017-18 season. Coming on the heels of the NCAA infractions, it was easy to believe this was a bit of a plea bargain – or at least a move to get the powers-that-be off Syracuse’s back. There was “no way” Syracuse was actively going to push him out against his will.

Boeheim built the Orange program, after all. His name is on the court. There are few figures more important to the history of their teams than he is to SU.

He, himself, also gave rise to some theories about the lack of any real timeline. When SI.com’s Pete Thamel recently questioned the likelihood of a 2018 departure, Boeheim angrily shot it down. But when he’s asked directly, he’s always provided fuzzy answers. He knew as well as the rest of us: he could retire whenever he damn well pleases.

Hopkins knew it, too. And again, he wasn’t going to force out his long-time friend and mentor.

So with a nebulous number of years remaining as an assistant at Syracuse, he made a decision that could prove to benefit everyone, in the long run: He left to figure out how to run a program elsewhere. It was honestly the only way this was ever going to end for all parties involved.

Despite years of being the “coach-in-waiting,” Hopkins continued to interview for high-profile jobs. Despite an announcement saying when his tenure as Orange coach was over, Boeheim always remained coy. And when faced with point-blank questions about whether Syracuse would be forcing Jim to adhere to the stated timeline, SU officials always deferred to the coach, over an ironclad answer.

This – all of it – was exactly what was supposed to happen.

For Syracuse, you got the NCAA off your back in 2015, and were then able to stand by your coach in 2017. For Boeheim, you’re allowed to go out on your own terms now. And for Hopkins, you get paid, you get to run your own program (Washington) with very little history of its own. You can build it in whatever image you decide. Your national recruiting chops can now be put to the test.

SU also gets to see Hopkins give the head coaching gig a shot elsewhere, and THEN hire him back if they so choose. If he falls on his face, he does it on someone else’s dime and with someone else’s program. If he succeeds, they’re heroes for bringing the favored (now experienced) son back to campus when Jim leaves.

The only loser here is Washington, if anyone. And even then, the Huskies will get a very capable and skilled coach who can build something out of nothing in Seattle. If he succeeds and heads back to Syracuse, then at least they’re starting from a better place than before.

Should he fail, that’s a risk worth taking. One of the sport’s marquee programs was about to hand the reins to him without any track record of success. The coach-in-waiting arrangement built value into Hopkins’s name, and now everyone gets to see if it was warranted.

How can anyone say this wasn’t planned, on Syracuse’s part?

That’s not a knock on SU. It’s credit where credit is due. This was a calculated move to have their cake and eat it too. And it worked.

Of course, that all assumes Hopkins returns to the Carrier Dome (or whatever it’s eventually renamed to be) when Boeheim retires.

Washington’s six-year deal with Hopkins is likely prohibitive of any sort of movement before year three, and realistically, year four would be the time it starts to become more likely. Boeheim’s new extension could run as long as it needs to in order to get Hopkins’s buyout down to a more manageable level.

Should Boeheim stick around for four more years, Hopkins will be the first phone call without any hesitation, and he’ll pick up without hesitation either. He’s called Central New York home for decades, his wife’s from there and it is home, even if he spent the first 18 years of his life in California. The loyalty he’s exhibited to SU doesn’t just vanish. It’s part of his DNA – something UW surely understands already.

At first glance, Syracuse’s future appears less stable than at any other point since the late 1970s. But if you believe that this was all a well-orchestrated campaign by the Orange powers-that-be, the program could be on some of its surest footing ever. That’s all SU, Boeheim and Hopkins have wanted this entire time.