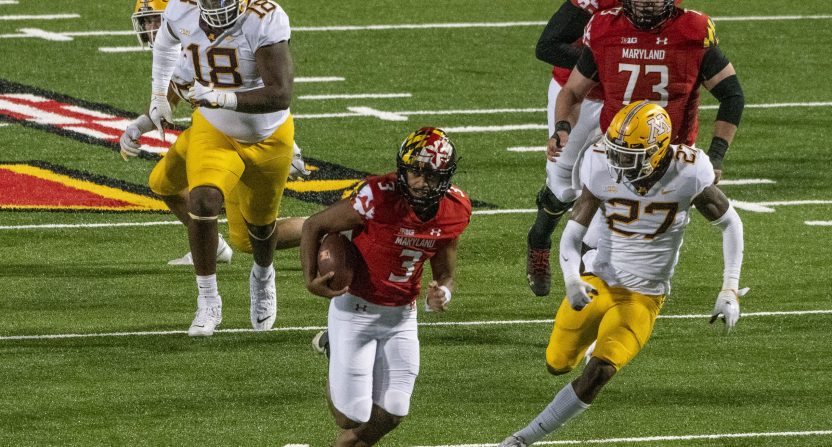 What a week for the Tagovailoa family. Tua is set to make his first NFL start on Sunday for the Miami Dolphins, and Taulia got his first victory as a college starting quarterback on Friday night. Taulia led the Maryland Terrapins to a wild 45-44 comeback overtime win over the Minnesota Golden Gophers in College Park.

Minnesota entered the game as an 18-point favorite, and even led by 17 points (38-21) entering the fourth quarter. Until this game, teams that trailed by at least 17 points were 0-71. Minnesota’s Mohamed Ibrahim had four rushing touchdowns in the first half, and the Gophers felt in full control through the third quarter. But Tagovailoa and the Terrapins put together a 17-0 finish to regulation, sending the game to overtime.

On the opening drive of overtime, Tagovailoa scored what would serve as the game-winning touchdown with this dive touching the pylon:

Taulia Tagovailoa dives for the pylon to give Maryland the lead in overtime. He has 5 touchdowns (3 passing, 2 rushing). pic.twitter.com/q70GbZGIpN

Minnesota answered with a touchdown, but kicker Brock Walker missed the extra point to end the game.

Tagovailoa transferred from Alabama to Maryland in May, and had a rough debut for the Terps in a 43-3 loss to Northwestern last week, throwing zero touchdowns and three interceptions. The sophomore was terrific on Friday night, showing impressive arm talent to go with the ability to make big-time plays with his legs.

Taulia Tagovailoa spins away to avoid the Minnesota pass rush and runs for a 39-yard Maryland touchdown. pic.twitter.com/ljoAJdHNrS

Now Taulia Tagovailoa gets it done in the passing game with a strike to Jeshaun Jones, who takes it to the house for a 76-yard Maryland touchdown. pic.twitter.com/2D66KWNCYd

Taulia Tagovailoa! What a throw. pic.twitter.com/5mXPkkzqBT

Tagovailoa completed 26-of-35 passes for 394 yards, three touchdowns, one interception (which was a hilarious play), and added eight carries for 64 yards and two touchdowns.

It’s a huge win for a Maryland squad that only beat Rutgers in Big Ten play last season (and Rutgers went winless), and they have to be very excited about what they have in Tagovailoa over the next few years. On the other side, it’s a brutal loss for P.J. Fleck and Minnesota, who fall to a disappointing 0-2.