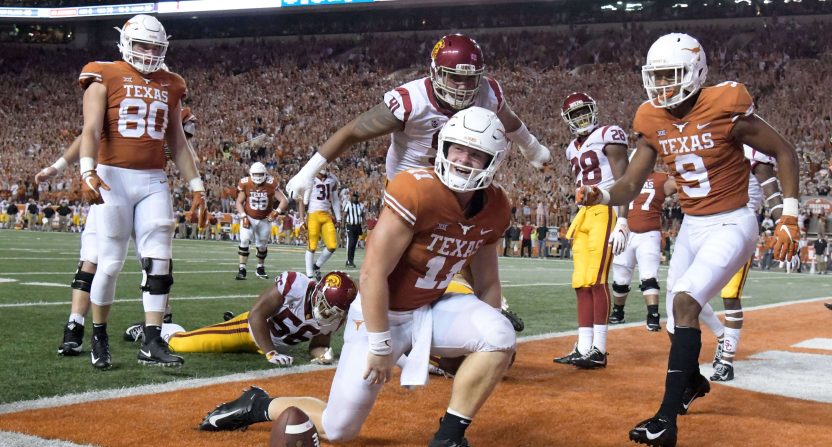 No, Saturday night’s matchup between Texas and USC in Austin, Texas was far from the epic clash of blueblood programs you’d hope to see when these two storied programs meet on the field. And no, it wasn’t a true must-win game for either the Longhorns or the Trojans.

But a 37-14 pasting of USC, sending the Trojans home with a second-straight loss in national primetime television should calm some nerves of Texas fans and take at least a little bit of pressure off Texas head coach Tom Herman. At least for a week.

Between Texas and USC, Texas likely stood the most to gain with a win. After starting the season off with a loss at Maryland (who was run over by Temple in Maryland’s true home opener earlier in the day) and then struggling to impress in Week 2 at home against Tulsa, Texas came into their home matchup with the defending Pac-12 champions with some serious lingering questions about their offense. Sam Ehlinger helped to address some of those issues with 223 passing yards and two touchdowns against USC.

The rest of the Texas offense seemed to get in a bit of a rhythm as well, converting nine of 17 third-down attempts and picking up a first down on the only fourth-down attempt of the night by Texas. There was still some visible room for improvement for the offense, but Tom Herman should like how his team shut down the Trojans.

Freshman USC quarterback JT Daniels had himself a 300-yard night, but USC was incapable of running the football against the Longhorns. Texas entered the Week 3 game ranked 89th against the run, allowing 166.0 rushing yards per game. USC managed just five rushing yards, taking into a rushing total of -16 for Daniels. USC’s leading rusher, Stephen Carr, had just 13 yards on six rushing attempts. USC’s decision to rely on a passing game with a quarterback coming off a rough performance against Stanford seemed unwise, but it was almost necessary as Texas pulled ahead by a sizable margin.

Credit Tom Herman for the battle of coaching wits with this one against Clay Helton. USC’s playcalling had questionable moments all night. As the Trojans slip out of the top-25, with Texas potentially making a push to climb back in, USC will look for their own set of answers to turn things around in a hurry. Already with two losses, USC has a lot of ground to make up if it’s going to make a case for consideration in a New Year’s Six bowl game. USC is already trending in the wrong direction, but that’s in part the perception only because the preseason polls are purely guessing games. Like Texas before them, USC will fall out of the top-25 as it’s become clear they were taking a step or two back this season.

This USC team was ripe for the picking of a Texas team in need of a nice win. Texas is far from being “back,” but wins like this can help re-establish a foundation for success to come. What Texas does next will be more important than this particular win. What’s next for Texas? A home game against a TCU team that gave Ohio State some good punches in Arlington Saturday night before ultimately running out of steam against the Buckeyes.