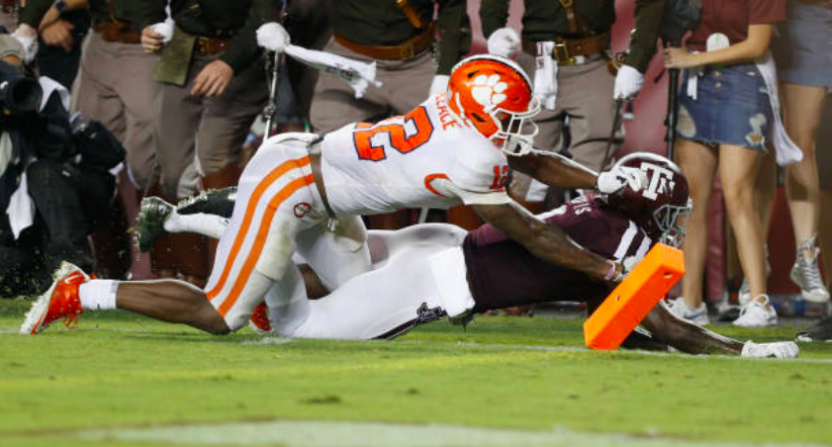 For a few minutes late Saturday night, the ACC appeared to be on the edge of a precipice. The Week 2 schedule — while not appearing too unkind — had suddenly struck the conference. A few more plays, and the ACC’s hopes of being viewed as one of college football’s best conferences would be dashed, at least for this season.

The earlier games were not kind to the ACC. It’s true, five teams did easily beat inferior competition. Syracuse, Virginia Tech, Wake Forest, and Boston College all blew out FCS teams. Miami (Fl) would later do the same, while N.C. State dismantled Florida State. These six conference teams did what Power 5 teams are supposed to do to cupcakes. On top of that, for the second straight year, Duke picked up what looks like a good win over Northwestern.

Those are about all the positives for the conference on the week. Also in the early games, North Carolina was blown out by East Carolina. ECU was a once-solid Group of 5 program. Unfortunately, this is no longer true. The Pirates beat the Tar Heels by 22 points- six days after losing to FCS North Carolina A&T. Georgia Tech also lost to South Florida. USF is no slouch as Group of 5 teams go, but the Yellow Jackets should be expected to beat a Quinton Flowers-less USF squad.

Additionally, as we headed into crunch time of the late games, Virginia failed to complete its comeback over Indiana, falling 20-16. There’s no shame in that, though. There is some shame in what Pitt was doing at the time, though. After hanging tough for a half — the Panthers absolutely should have led heading into halftime– Pitt was in the process of getting completely blown out by Penn State.

Which brings us to close to midnight, Eastern. Clemson is fighting off a furious comeback from Texas A&M. The Clemson defense had been stout all night, and the defensive line wreaked havoc, but Kellen Mond found space in the secondary during the final minutes. Clemson just couldn’t stop Texas A&M. It took a punch-out fumble at the one-yard line, followed by a stopped two-point conversion a few minutes later, for Clemson to hang on and win the game.

The No. 2 team in the country almost losing to unranked Texas A&M was not the biggest problem for the ACC at that moment, though. That would belong to Florida State, who was getting thoroughly beaten by FCS Samford. The Seminoles survived by scoring the winning touchdown with just over four minutes remaining- but that game should have been out of hand earlier. Samford QB Devlin Hodges — who shredded the Florida State secondary all night — made several major mistakes that almost certainly cost Samford points.

Moving forward, Willie Taggart has some serious questions to answer. Even after top defensive lineman Ahmad Gooden was ejected for targeting, the Florida State line had trouble protecting Francois. The defensive line couldn’t get any significant or sustained pass rush against a team that should be far smaller and less talented.

The secondary also has major questions. The lack of Derwin James shouldn’t allow a team like Samford to find space and torch the Seminoles defense like this. Florida State doesn’t look anywhere near a contender right now. And when Florida State isn’t a contender, the entire ACC suffers.

On top of that, Louisville was struggling mightily against FCS Indiana State. In a game played in inclement, and every-changing, conditions, the Cardinals were tied with the Sycamores until late in the third quarter. Louisville needed to change quarterbacks from Jawon Pass to Malik Cunningham before the offense finally got going and pulled away late.

Where to go from here?

There was a time when Florida State was trailing Samford, Louisville was tied with Indiana State, and Clemson was a Texas A&M two-point conversion away from going to overtime. That’s not a good look for the ACC, at all.

Still, much of college football is about surviving and advancing. For Clemson and Louisville, that’s certainly true. Florida State has shown that it isn’t anywhere near elite status this year, though the Seminoles did avoid a loss that would drag down the entire conference. These three expected contenders all showing poorly at once absolutely hurts, but it’s a long season. If Clemson goes 12-1 or better, no one will worry too much about the first road game of the season. The ACC is still on the path to putting a team in the Playoff, but this week definitely cost it some of its wiggle room. ACC teams should just be happy that it didn’t cost them much more.