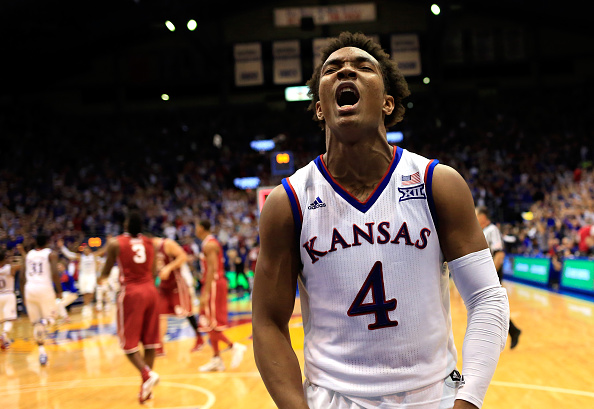 One of the better college basketball games in recent memory was played Monday night between the two top ranked teams in the nation, as Kansas and Oklahoma squared off at Phog Allen Fieldhouse in Lawrence. If you didn’t watch the game, words can only say so much, but can’t make you feel exactly what went down. It was truly spectacular.

Kansas controlled the game for the majority of the first half. Perry Ellis, one of the better players on a very talented Jayhawks’ squad, scored seven points in 50 seconds on three straight Kansas possessions. That quick burst really helped propel the Jayhawks into their dominance early on.

The Sooners would not go away without a fight, though. Buddy Hield and Jordan Woodard carried the Sooners at the tail end of the first half, combining to take Oklahoma on a 12-0 run and giving them a 44-40 lead after trailing 40-32 with under two minutes remaining in the half. It made the anticipation for the second half almost unbearable.

The second half seemed to be going Oklahoma’s way for the first 10 minutes or so. Kansas had trouble the first few minutes trying to get a basket, and found themselves down 10 points quickly. A stretch in the middle of the second half got the Jayhawks back within striking distance, and we had ourselves a ballgame. We knew it was going to be good, but we didn’t know it would be great.

In fact, in the final six minutes and change of the second half, neither team held a lead that was bigger than three points. It made for a game that kept everybody watching it on the edge of their seats. A game so good, so close, that you forgot that the Golden State Warriors were playing at the same time. That says a lot, considering they might be the greatest show in sports right now.

Buddy Hield’s legacy would begin to grow, as he knocked down a pair of free throws to tie up the game after being fouled by Frank Mason III. After an Oklahoma missed free throw that would have concluded the game, we moved into our first overtime.

The first overtime appropriately started with a Perry Ellis jumper, with a counter from Jordan Woodard. The Sooners would go on a 9-2 run, taking an 86-81 lead with 2:25 left, but would not score another basket in the period. Devonte’ Graham and Perry Ellis bridged the gap, and neither team was able to buy a basket in the final 48 seconds, giving everybody watching unbearable angst, watching missed jumper, after turnover, after missed jumper.

The start of the second overtime had to start with a Buddy Hield three. But in dramatic fashion, Devonte’ Graham answered immediately, sinking a three that nearly took down Phog Allen Fieldhouse, only to be answered with a deep Jordan Woodard three of his own. It was at this point that everybody had already grabbed their phones to tell whoever they knew to turn this game on. It was must-see television.

The fatigue really began to set in for both teams in the second overtime. After baskets by Landen Lucas and Jordan Woodard, neither team was able to get a basket for the final 2:34 of the period, building up even greater anticipation than fans could fathom after watching the first overtime. Despite the lack of scoring, the action seemed just as high flying as ever, and we wanted more.

Not to be outdone by the first two overtimes, the third overtime was as equally dramatic as the first two. Wayne Selden Jr. continued what seemed to be a three-point storm. Kansas was able to take a four-point lead with 2:53 left, until Buddy Hield (yes, him again) knocked down a much-needed three to keep his team in the game.

The two teams traded baskets on their next three possessions, with the Sooners going up 106-104 with one minute remaining, but they would not score another basket. Frank Mason and Devonte Graham closed the game up with free throws after a pair of Buddy Hield turnovers and a missed three at the end gave the Jayhawks the 109-106 victory.

Of course, like any great game, it didn’t lack controversy. Many feel that Kansas should have been called for a technical on an inbounds play late in the third overtime when Frank Mason appeared to have touched the line on an inbounds pass he was defending. But as it goes in all sports, in late, close games, the whistle is (almost always) appropriately swallowed.

Somebody had to win at the end, but it’s rare to have a game where fans who have no rooting interest in a game follow with such passion.

Kansas’ depth really came in handy with each new overtime period. It was clear in the final minute of the game that Buddy Hield had absolutely left everything he had out on the floor, and the Jayhawk faithful acknowledged his valiant effort at the end of the game, giving him a standing ovation. Bill Self said afterward that Kevin Durant was the only other player to receive such an honor. That’s pretty good company.

The game was also one of the most clear examples of the change in rules that have been implemented in college basketball. Since a shorter shot clock was added, statistically scores have gone up, and games have been quicker. This is also in addition to timeout rule changes, which include timeouts being reduced from five to four, along with no more than three being carried over in the second half.

There has also been a stricter enforcement of the resumption of play, whether it be coming out of timeouts or after a player has fouled out. Team timeouts have also turned into media timeouts, when they are within 30 seconds of media timeouts.

If you missed this one, it’s ok. We get to watch these two teams get after it again on February 13 in Norman in a game that should have monumental Big 12 title implications. Mark your calendars, clear your schedules. Do not miss it.

This game was an amazing spectacle about what college hoops is all about, and may even drive the casual March Madness fan into watching some regular season hoops, which can be just as exciting at times. And if this is the type of basketball we’re getting in early January, March should be sensational.