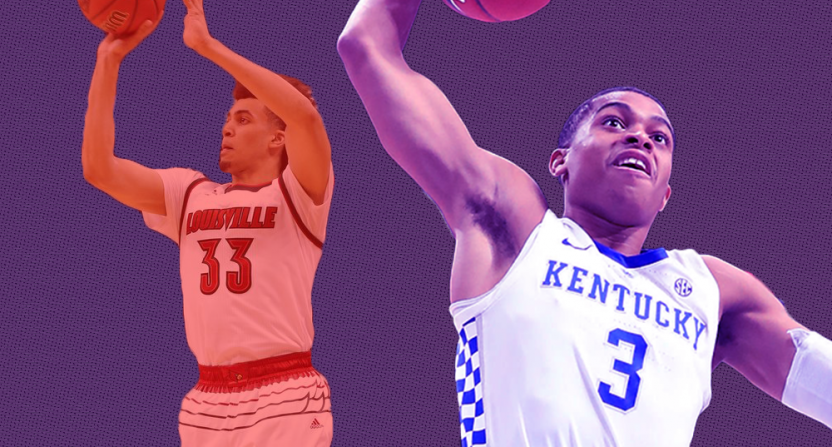 There are numerous great college basketball rivalries. Duke versus North Carolina, boosted by unrelenting ESPN hype, annually boasts star power. However, they are Atlantic Coast Conference brethren and play each other twice and sometimes as many as three times in a season. The frequency –for those who reside outside of North Carolina — makes it seem slightly less special. You want nasty? The Crosstown Shootout (Cincinnati vs. Xavier) gets nasty, highlighted by the 2011 brawl.

Genuine hostility runs through the DNA of the cities, schools, cultures, fan bases, and players. These programs, just 78 miles apart, have both won national championships in recent years. Both have celebrity fans: Kentucky’s got Drake and Ashley Judd. Louisville has Jennifer Lawrence and Billy Murray.

Kentucky has always been the more traditional power. The Wildcats claim royalty with eight national championships. (Only UCLA has more). Louisville has three NCAA titles (one vacated). Kentucky won its last title in 2012. Louisville won the next year.

The rivalry reached its apex with Rick Pitino vs. John Calipari. Pitino, known to some as Turncoat Rick, dared to return to the Commonwealth in the 2001 to revive the Louisville program after previously reviving the Kentucky program in the 1990s. The absolute gall of him! When Calipari came to Kentucky in 2009, that ratcheted up the vitriol to DEFCON 1.

These guys were frenemies at best and mortal enemies at their worst. You could do a 30 for 30 on their relationship, starting when the two first met at basketball camps in the 1970s. Then there is their connection at UMass – Pitino’s alma mater and Calipari’s first head coaching job. There are conflicting stories on exactly how Calipari got the job and Pitino’s story of helping Calipari land it – which may or may not be true. When it comes to bragging rights, Calipari won – victorious in all but two of the 11 games. It culminated with the Wildcats beating Louisville in the 2012 Final Four en route to winning the national championship.

The glory days of the Kentucky vs. Louisville rivalry might have died last year. No Pitino (fired). No real hope for the Cardinals. As expected, Kentucky rolled to a 90-61 home win for their third biggest margin of victory in this series.

But there’s new juice in this one. Thank God. Last year’s meeting had all the excitement of a septuagenarian shuffleboard. First-year coach Chris Mack and his surprising Cardinals (9-3) will take on Calipari’s somewhat enigmatic 16th-ranked Wildcats (9-2).

The rebuild at Louisville has been fast-tracked. Mack’s Cardinals are a legitimate contender for an NCAA tournament berth. The Cardinals are No.17 in the NCAA’s latest NET rating. Who could’ve seen that coming considering the mess he had to clean up? Louisville went 22-14 last season under interim coach David Padgett, missing out on a tournament berth. Mack has energized a program that has all the necessary components to eventually be a national champion again (arguably the best arena in the sport, a program with deep pockets and a loyal fanbase). Yes, the possibility of serious NCAA sanctions loom but that hasn’t affected the on-the-court product or recruiting.

The Cardinals already have a key victory – a home win over Michigan State and its losses are by a combined 15 points to Tennessee, at Indiana, and against Marquette. They beat the Seton Hall team that stunned Kentucky. Louisville has a go-to scorer in sophomore forward in Jordan Nwora (17.8 points, 8.5 rebounds per game) who’s shooting 50.4 percent, including 40 percent from 3-point range.

Mack enters this rivalry as a neophyte, but he understands blood feuds having guided Xavier through the Crosstown Shootout. But Cincinnati hasn’t reached a Final Four in over a quarter of a century, and Xavier has never reached the national semifinals. Kentucky and Louisville have championship pedigrees.

What do we make of the Wildcats? They finally beat someone who matters, defeating North Carolina 80-72 last week in Chicago. Prior to that, there were doubts about Kentucky because of being humiliated by Duke 118-84 in Indianapolis in the season opener and being stunned in overtime 84-83 by Seton Hall in New York City. The North Carolina outcome was needed. The Wildcats were running out of chances for an impressive non-conference victory. They’re No.22 in the NET rating.

Kentucky’s trip to Louisville will be its first true road game of the season. We’ll see how they handle the most hostile environment they’ll play in all season long. Since Calipari was hired, the Wildcats lead the series 9-2 and have won five of the past six meetings. These Wildcats are slightly different from previous Calipari teams. One of his most important players is graduate transfer Reid Travis. The former Stanford forward scored 20 points against North Carolina and is second on the team in scoring (15.1 ppg).

Who will win? Upstart Louisville is ranked ahead of Kentucky in the NET rating. However, kenpom.com and sagarin.com say the Wildcats are better. Rivalry games often have surprising outcomes and unexpected heroes. Many people will be curious to see this latest chapter of a state that loves its basketball and loves to hate the “other” school.