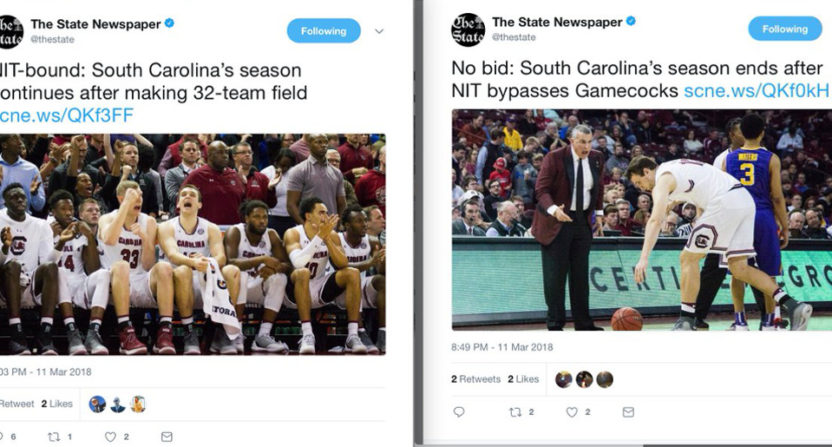 A common news practice around predictable or scheduled events is to have a story ready to go and only fill in the details before pushing it live, or to write stories for both possible outcomes and then just push live the one that happens. However, that can lead to some issues if a story gets published prematurely and is then later proven false, or if the wrong version gets published, as we’ve seen with major mistakes like the Chicago Daily Tribune‘s “Dewey Defeats Truman” headline in 1948.

Something along those lines appears to have happened with the Columbia, South Carolina-based newspaper The State, which briefly published a story saying the South Carolina Gamecocks were headed to the NIT before correctly publishing the version that indicated they were passed over. And Twitter noticed:

Dear @thestate: Please help me figure this out. pic.twitter.com/Q8kZP06aE2

Not great, The State.

In this case, it looks like the wrong pre-written version got published, as the text in Dzewierzynski’s tweet includes things to be corrected later such as “travel to/host # seeded (team) on time/date.” And that’s an easy enough mistake to make, with someone clicking the wrong button. But it’s one more example of the need to be very, very careful with these kinds of pre-written stories.