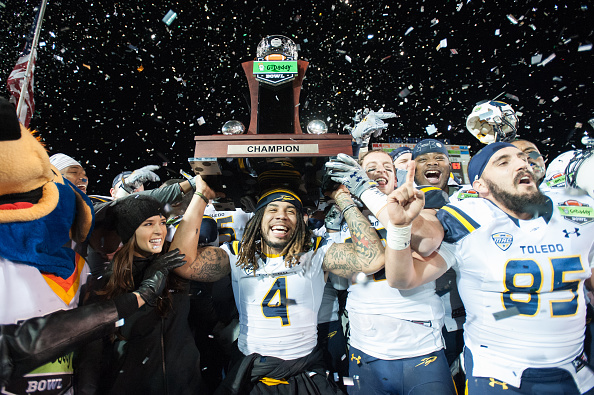 Is 2017 the year that Toledo returns to the MAC championship game? 20 years ago, the answer to that question would have been a resounding yes. Under the leadership of Gary Pinkel and Tom Amstutz, the Rockets appeared in five of the first nine MAC championship games, capturing the title in 2001 and 2004.

Unfortunately, Toledo hasn’t appeared in the league title game since then. They’ve come close, capturing a share of the MAC West title in 2005, 2011, 2014, and 2015. However, the Rockets managed to lose the wrong game at the wrong time, finding themselves on the wrong side of the tiebreaker in each of those seasons.

Will that change this year? In a word: yes. In fact, I’ll go on record as saying that Toledo will win the MAC in 2017.

Don’t get me wrong: the Rockets still have holes to fill. After all, they have to replace a number of first and second team all-MAC performers such as Kareem Hunt, Michael Roberts, Storm Norton, Mike Ebert, John Stepac, Treyvon Hester, and Dejuan Rogers.

Despite these losses, Toledo still has plenty of talent coming back. Sure, the line loses Norton and Ebert, but welcomes back five players with starting experience, including Elijah Nkansah (19 starts) and Nate Jeppsen (15). The receiving corps is also loaded with Cody Thompson (1,269 yards, 19.83 ypc) and Jon’Vea Johnson (773 yards, 19.33 ypc). Running back Terry Swanson is a more-than-capable replacement for Hunt, rushing for 2,238 yards in three seasons as a Rocket.

That’s a heck of a supporting cast for Logan Woodside, who was arguably the best quarterback in the nation last year.

It’s also important to note that the schedule works in the Rockets’ favor this season. Yes, there are some tough road trips, but top contenders Northern Illinois and Western Michigan both visit the Glass Bowl this year. That gives Toledo a slight edge against the two squads that have knocked them out of the league title game in each of the last three seasons.

Combining a (relatively) favorable schedule with a lot of talent from last year’s squad – which nearly beat BYU in Provo – and the 2017 campaign has all of the makings of a championship season. Look for the Rockets to return to Ford Field in December and win their first conference title since 2004.