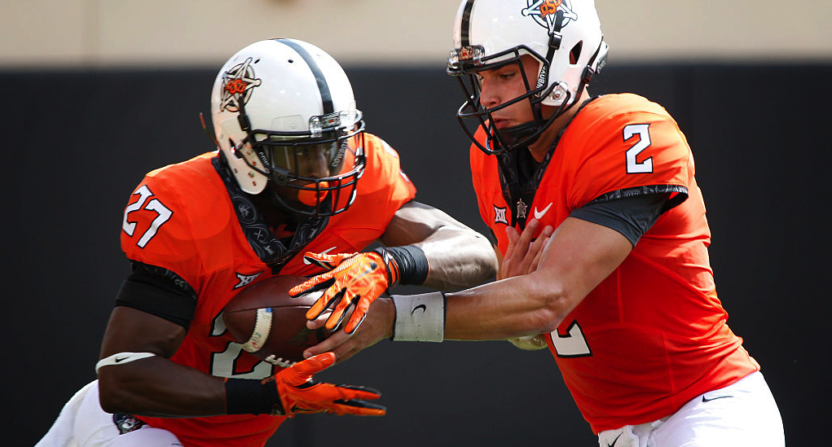 The Comeback’s college football preview coverage continues as we drive closer to the top 10 in our Top 50 countdown. We’ll continue to move up the list each day until the beginning of the regular season when all the fun begins. Up next in our rankings, the Oklahoma State Cowboys.

If it feels like Oklahoma State football previews are sort of a “copy and paste” type of thing annually, don’t expect much difference this year. The M.O. will still be outscoring more than the other guys and hoping the defense can hold up in areas where the O just has one of those off weeks.

The good news for 2017 is that this might be the best Pokes’ offense that the well-coiffed Mike Gundy has had during his time in Stillwater, and the schedule is conducive to a potential playoff run. Still, it will rely on a defense that will inevitably asked once or twice to put out one or two offensive wildfires to achieve their ultimate dreams.

If a college football season were a country song, there’d inevitably be something about cowboys showing resolve after losing a girl and the pickup broke down and the boss let you go that same afternoon. Well, after losing at home in stunning (and highly controversial) fashion to Central Michigan and then getting lapped by Baylor, OSU’s season could have hit the skids.

Then these Cowboys rattled off seven straight wins before a season-ending paddling by archrival Oklahoma. Never mind the salty end, though. Oklahoma State regrouped to enter a feel-good offseason full of expectations after demolishing Colorado in the Alamo Bowl. Other quarterbacks probably get more pub, but Mason Rudolph’s 28 touchdowns to only four interceptions is an incredible feat. Big things are expected this year.

Keep an eye on Tylan Wallace, who placed third in Texas in the state high jump competition as a senior. He won’t likely be anything more than a rotation guy as a wide receiver in this offense. But there’s no shortage of scoring that goes around in Stillwater and wide receivers in this system are always worth keeping an eye on as potential stars.

0.9 – It’s sort of a bizarre statistic to point out, but in 2016-17, it was the average punt return yardage of OSU’s opponents. With what’s expected to be plenty of high-scoring games, field position will be a premium and it appears the Pokes have a big-time advantage here. What are they doing in practice?

2,904 – Rushing yards given up by the 2016 Oklahoma State defense. Yes, this team does have a legit playoff shot, but they absolutely have to make it a little less sieve-like on defense. You can’t win titles by allowing nearly 3,000 rushing yards.

28:51 – There aren’t too many teams that will win 10 games and lose the time of possession battle by any amount of minutes, but the 2016 Pokes did just that. One key to helping out the defense might be holding onto the ball longer. Yes, it goes against the style of play, but it might need to be managed.

Why it matters: Bedlam won’t be at the end of the season this year. That will feel weird, in a sense, because it seems like this game annually has some play in the Big 12 title race. But it’s still the key game as both teams from the state figure to be in the conference title hunt and maybe more. Add in the Big 12 possibly needing help to get into the Playoff, and it gets even larger.

Mason Rudolph, QB – With all the great offenses this program has had under Gundy, no quarterback may be a more perfect fit than the tall, but mobile Rudolph. His accuracy cannot be denied, and he simply doesn’t give the other team much option at capitalizing on any mistakes he makes. He’s one of the best in the nation, if not thee best.

Justice Hill, RB – Hill was a revelation in 2016, rushing for almost 1,200 yards. He’ll be asked to again do the lion’s share of the ground work and should have most defenses on their heels worried about the electric Cowboys passing game. Look for him to improve as a better big-play guy, also.

Chad Whitener, LB – No one will be asking the Pokes to win 13-10 football games, but Whitener is the best player on a defense that at times will need stops to win games. He had 71 tackles last year, down 22 from the previous season. Look for him to have a featured and big year.

Oklahoma State will win the Big 12, but once again, the conference will be squeezed out of the CFB Playoff picture.