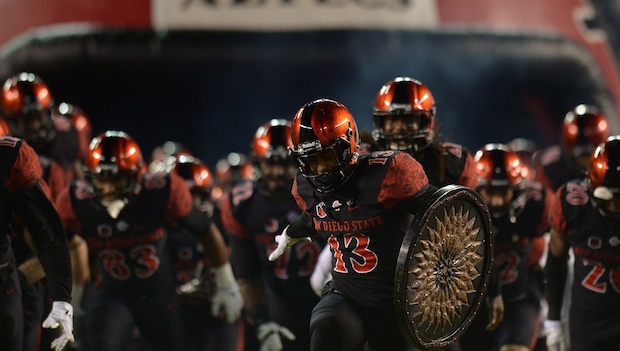 The Comeback’s college football preview coverage continues with the next team in our Top 50 countdown, the San Diego State Aztecs.

The Chargers may have departed, but never fear, ever-transient San Diego — good football will still be played there. That’s not saying what the Chargers did most often was “good,” but the local college team should get more eyeballs coming off a school record 11 wins in two consecutive seasons. Prior to that, you’d have to go back to 1969 to find such a win total here.

The Aztecs figure to keep on humming after scoring over 35 ppg in 2016. They lose all-world RB Donnel Pumphrey, but Rashaad Penny and Juwan Washington should more than keep the running game rolling. This is a program on the rise, and the squishy schedule should allow them to chase another double-digit figure win total in 2017.

Any time you tie the school record for wins, the season is more than just a net positive. The Aztecs reeled off six conference wins in a row after a non-conference loss to South Alabama when they were ranked in the top 20. Aversion to the rankings continued, as their next loss was at Wyoming when they’d slipped back in at 24. They’d avenge that loss in the conference title game and pelt listless Houston in the Las Vegas Bowl.

This time, more hype surrounds San Diego State, and should they see that national respect in the form of top 25 votes, they’ll hope to stick in there rather than momentarily flat line. On a more record-setting, positive note, the 2016 Aztecs became the first team in college football history to feature separate 2,000- and 1,000-yard rushers on the same team. So that tells you how they plan on defeating you.

Of all the 25 newcomers that could make an impact, keep an eye on early enrollee defensive end Anthony Luke, ranked in the top 160 nationally. The 6-foot-4 Luke should fit in well during his time there in the Aztecs’ aggressive schemes.

2,133 – Departed rushing yards of one SDSU RB Donnel Pumphrey. This is a run first, second, and if they can, possibly third type of offense, and losing four starters plus a national leader in rushing yards will be difficult to replace. If there’s a worry spot going into this season, it’s how “hit the ground running” the new running game will be. Bad pun intended.

15.5/22 – The first number represents the Aztecs’ returning sacks. The second represents the departed players’ total. SDSU under Long will always put a premium on tough, fast defensive line play, but there are definitely some big shoes to fill. Look out for a possible breakout year from DT Sergio Phillips.

21.5 – The average yards per catch for WR Mikah Holder, their top returning pass catcher. No matter how well you’re going to chew up ground through the running game, you don’t get to where you’ll want to be without some big plays and a pair of go-to hands. Holder will likely have an even bigger role, so expect more yards than 2016’s 581.

Record in the last five meetings: 1-3

Why it matters: Look, when you’re a Gang of Five member, any New Year’s Day Six bowl game dreams depend on looking apropos at that level in the nonconference session. They get two cracks, at Arizona State and then home against Stanford, but the Cardinal represent the chance to make the biggest waves as they’re a perennial top 25 program and they’re not in Palo Alto for this one.

Rashaad Penny, RB – Don’t worry, there’s not much to live up to, young fella. That’s a lie. He’ll be the main bell cow of a run happy offense that as aforementioned, hosted the nation’s leading rusher last year. Penny’s not your average replacement, though. He trotted for 1,018 yards of his own with a staggering 7.5 YPC average.

Ronley Lakalaka, LB – The leading returning tackler (73), is sort of a jack-of-all-trades type. He’ll need to be, as they lost leading tackler by far, Calvin Munson (116, 4.5 sacks). The Aztecs have a good amount of talent in the middle of the field, and Lakalaka will spearhead a group that shouldn’t see any drop-off.

Juwan Washington, RB – SDSU as already mentioned was the first team in history to have a season with a 2,000 yard rusher and then another 1,000 yard one. Washington has been impressive in the duty he has gotten, but the workload will be much more stout and ultimate success likely depends on continuing to chew up ground.

San Diego State will win 11 games again for the third straight season, eclipsing their glory days of the 1960s when they twice achieved that win total.

The Aztecs avoid Colorado State and get Boise State at home from the Mountain Division, but they’ll still need to trip up at least one of Stanford, BSU, or Arizona State on the road — plus hold serve in all the other games they’ll be favored in — to hit that mark. The foundation here is strong enough to do so, so bank on it.