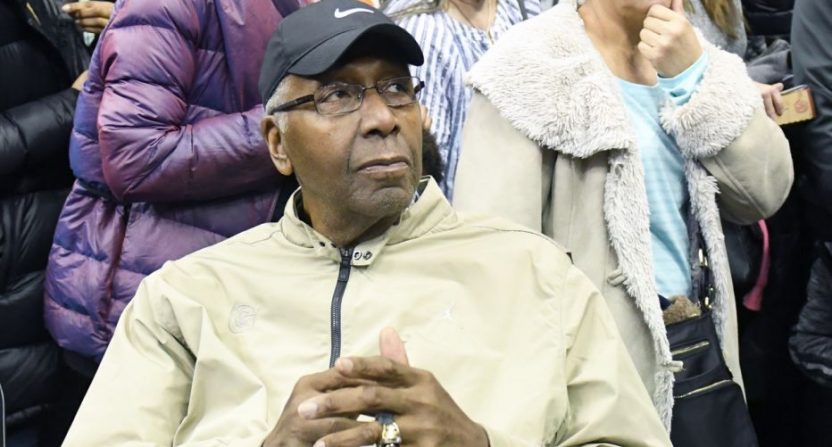 John Thompson, the longtime legendary head coach of the Georgetown Hoyas, has died at the age of 78. Thompson is the second legendary college coach in less than a week to pass away as this past Thursday, Hall of Fame coach for the Arizona Wildcats Lute Olson died at 85.

Thompson spent his entire collegiate coaching career with the Hoyas, transforming them into a college basketball powerhouse in the 80s. Thompson’s Hoyas teams typically went deep in the NCAA Tournament in the 80s, making the final three times in four years and winning in 1984.

While the Hall of Famer experienced success on the court, Thompson will also be remembered for how he developed his players into adulthood in addition to being great basketball players. It seems like more and more collegiate coaches these days only focus on the sport aspect of coaching and they show how they are inappropriate leaders for young people but college coaches have an impact in their players’ lives at a stage where they progress from kid to adult and John Thompson understood that.

Thompson challenged his players to be better people but also loved his players, defended his players, and fought for his players even after they graduated (he had a 97 percent graduation rate). John Thompson was like a father figure to many of these players and in turn, those players have consistently spoken positively about him throughout the years.

That was the theme of the many tributes to Thompson. This was a man who gave people second chances when no one else did, who stared down drug dealers when they were hanging around his players, who encouraged his players to express their individuality while being part of a team, and who fought for equality in a time when so many people in a position of privilege incorrectly thought racism was dead. It’s why so many within the Black community and those on the outside respect the things John Thompson has done and that’ll be what he’s ultimately remembered for.

Georgetown coach and Naismith Memorial Hall of Famer John Thompson Jr. is remembered across the basketball and cultural landscapes. pic.twitter.com/0N9LlYULEA

A story that has stuck with me for years: John Thompson once invited a drug kingpin responsible for dozens of murders into his office to excoriate him for befriending Georgetown players. https://t.co/q0EVDjH1I6 pic.twitter.com/KpCyqz6hiA

If John Thompson only ever made this one public utterance, it would have been enough to make him a legend. You only wish every student or athlete was fortunate enough to learn from someone who didn’t think of them as a product of pathologies. pic.twitter.com/IjPAUvLDmF

Very sad news to wake up to on this cloudy morning. Our legendary Georgetown coach, John Thompson has passed away. He was my mentor, great teacher, hero and a father figure to so many us who got the chance to play… https://t.co/wLPCprJ6gO

John Thompson is a legend in every sense of that word. He was the first African American head coach to lead a team to a national championship. What he did off the court, fighting social injustice and racism, set a standard. We have lost a titan. May he Rest In Peace. 🐐 pic.twitter.com/kOYPMeSS2F

John Thompson Jr. was a legend on and off the court.

In 1989, the Hall of Fame coach protested a new academic eligibility rule that he believed targeted African-American athletes, denying them of scholarships. pic.twitter.com/o0sDnYgSiG

RIP TRAILBLAZER JOHN THOMPSON! As the first Black head coach to win the NCAA National Championship he made history, opened doors and changed the game for coaches and athletes! A true pioneer in college sports! pic.twitter.com/2HqVj9vCkP

RIP John Thompson, one of the game’s greatest coaches. His teams were smart, disciplined and ferocious on defense. Thompson was thoughtful and forceful on social issues, and always took the principled stand. A true giant, on the floor and off. pic.twitter.com/6QeqW3S0T8

If you don't know much about how badass John Thompson was, his Hoyas beat No. 2 Syracuse in the final game at Manley Field House in 1980.

JT, with massive 🏀🏀 gets on the PA mic and says "Manley Field House is officially closed. May it rest in peace.”https://t.co/1giYlxByMa

Growing up, we thought Georgetown was an HBCU the way legendary coach John Thompson represented that university and had us all wearing Hoya starter jackets. The Black community continues to mourn. Brutal week. RIP, coach. https://t.co/j4MkYPcpWB

The first black coach a lot of us ever saw. A man who made us think Georgetown was an HBCU, who nurtured Iverson, Ewing & Alonzo. Famously fought off drug dealers. Had boys rockin Kente at a college that purchased the enslaved to cancel school debt. Rest in Power, John Thompson pic.twitter.com/mO6buBKiCS

"John Thompson and Lute Olson lived great lives of purpose and advocacy for social justice through the game they loved."