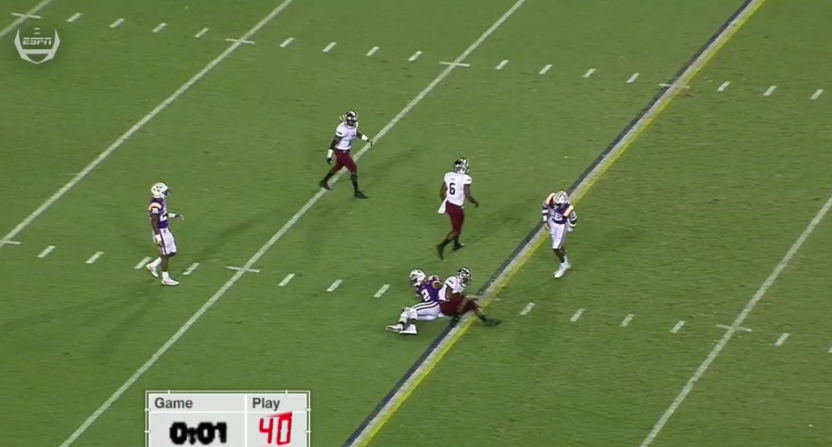 Having the Troy Trojans lead the No. 25 LSU Tigers at the half in Death Valley in Baton Rouge was weird enough in the first place, but how the Trojans extended that lead to 10-0 was perhaps even weirder. In the final seconds of the first half, Troy completed a pass over the middle for a first down, but the clock appeared to run out and the teams headed to their locker rooms. Trojans’ head coach Neal Brown complained at length that there was time left, though, and the officials reviewed it and decided there were two seconds left, allowing Troy to kick a 37-yard field goal. Kicker Evan Legassey then put it off the crossbar and through. Here’s the initial play:

Here’s announcers Clay Matvick and Kirk Morrison discussing the initial decision to end the half:

And here’s the referee’s decision and the off-the-crossbar field goal:

This could wind up being a crucial call if Troy keeps playing well and LSU keeps struggling. The Tigers were shut out in the first half for first time since November 5, 2016 (against Alabama), and the field goal further extended the Trojans’ lead. Troy then scored another touchdown early in the third quarter to take a 17-0 edge. We’ll see how this one ends up, but if it’s close or a Troy victory, that may be an important refereeing decision indeed. It’s certainly one of the more unusual plays you’ll ever see, especially with the teams already being in the locker room, then coming back out to kick the field goal.