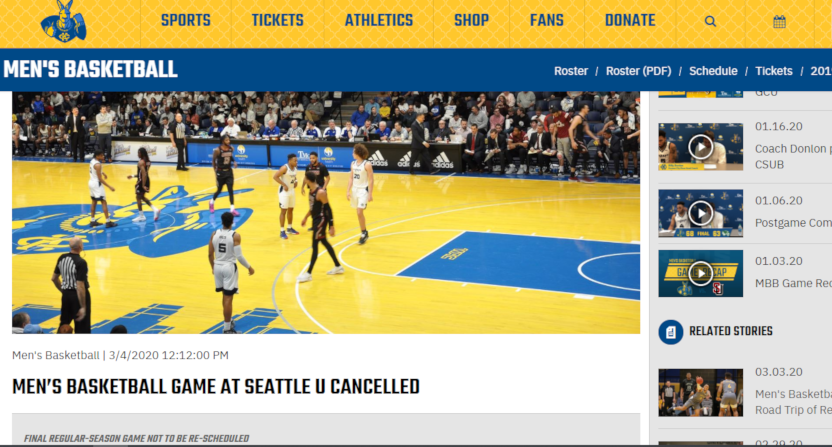 Plenty of U.S. sports leagues and events have talked about how they’re monitoring the coronavirus situation and taking precautions, but we’ve now seen the first major U.S. sports events actually canceled. There have been cancellations and other measures elsewhere, including the postponement of the World Athletics Indoor Championships in Nanjing, China until 2021 and Serie A and other Italian leagues playing behind closed doors for a month, but now those have come to the U.S. with a number of basketball cancellations from two Western Athletic Conference schools.

The Chicago State Cougars announced Tuesday night that their men’s basketball  team won’t travel for a pair of scheduled WAC games Thursday and Saturday against the Seattle Redhawks and Utah Valley Wolverines, and that their women’s team will cancel its planned home games against those schools on the same nights. And then on Wednesday, the University of Missouri-Kansas City Roos men’s team announced (announcement pictured above) that they won’t travel to face the Redhawks on Saturday. Here’s more on that from Jeff Borzello of ESPN:

“While disappointed that the situation has evolved as it has, I fully respect the right of any member institution to determine what it believes to [be] in the best interest of its student-athletes,” WAC commissioner Jeff Hurd said. “From a conference standpoint, the necessary adjustments will be made according to NCAA policy in order to bracket the conference tournament scheduled for March 11-14 at the Orleans Arena in Las Vegas.”

The WAC added that “all other conference events will proceed as scheduled.”

At this point, these are the only three men’s Division I games that have been canceled.

And here’s more from the UMKC statement:

The Kansas City Men’s Basketball team will not play their Saturday, March 7 game at Seattle U, citing concerns related to the coronavirus. The decision was made with student-athlete health and welfare as the top consideration.

The men’s program will travel to Utah Valley on Thursday for an 8 p.m. CT start time. The Roo women’s basketball team is set to host both Utah Valley Thursday and Seattle U on Saturday at Swinney Center. Both teams will compete in the WAC Tournament March 11-14 in Las Vegas.

And while Seattle has seen most of the coronavirus deaths so far (and a large amount of events canceled or postponed over concerns), there are plenty of confirmed cases elsewhere in the U.S. at this point. So it may not be the only location teams are avoiding soon. It’s notable that Los Angeles County’s emergency declaration has already been discussed as possibly leading to canceled or closed-door events, although that hasn’t actually happened yet. And with cases of the virus confirmed in 16 U.S. states as of Wednesday night, there are a lot of places to keep an eye on.