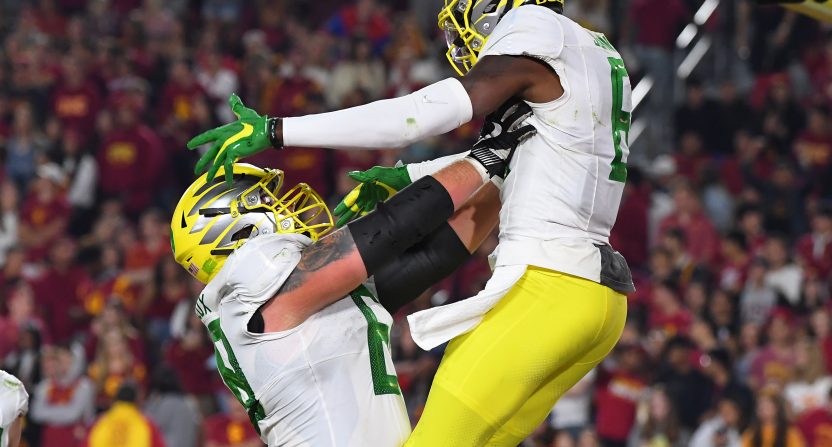 As if you haven’t learned your lesson by now, you can never rule any conference out of the College Football Playoff mere weeks into the season. This year’s example? The Pac-12.

It was a relatively down weekend on the college football schedule with many teams taking advantage of a second bye week on the schedule this year. Alabama and LSU were off preparing for their mega matchup next week. Big Ten contenders Ohio State, Penn State and Minnesota were also off. Oklahoma was off. Texas was off. With so many big names off, it was a good weekend for the Pac-12 to show off its top two contenders, Utah and Oregon, and the Utes and Ducks did not disappoint.

Utah and Oregon each played crossover games on the road, which could’ve been more of a threat than each turned out. Utah was on the road against Washington, the defending Pac-12 champions. Oregon traveled to USC, a team that had flashes at home and still had control of the Pac-12 South Division coming into the game thanks to a head-to-head tiebreaker with Utah. If ever there was a day for the Pac-12 to really take a hit on the playoff hunt just days before the first weekly playoff rankings are released by the College Football Playoff selection committee (this coming Tuesday night), this would’ve been it.

Good thing for the Pac-12, Utah and Oregon took care of business.

The Utes had a rough start on the road against the Huskies, but capitalized on mistakes by Washington quarterback Jacob Eason to find a way to a 33-28 victory. History was not on Utah’s side as the Utes had a 1-12 record against the Huskies all-time coming into the game. But history is history for a reason, and Kyle Whittingham’s program is looking to make some new history it can be proud of. The first road win against Chris Petersen and Washington puts Utah one step closer to playing for the Pac-12 championship.

That reality became that much more a possibility later when Oregon overcame their own slow start to dominate USC in the Coliseum. The 56-38 loss at home to the Ducks will certainly pour some gas on the Clay Helton coaching seat, but it also moved Utah back to the top of the Pac-12 South Division with a very manageable schedule left to get through. It also keeps Oregon in the hunt for a spot in the playoff, which quickly has become a postgame requirement to address, it seems.

Yes, College Football Playoff stumping season is upon us, so expect Oregon and Utah to have to make their cases every opportunity they get. If all goes well, the Pac-12 could have its best Pac-12 championship game yet with one-loss Utah vs. one-loss Oregon, and both teams could be in the top-10 when it happens. Will it be enough to send its champion to the College Football Playoff, or will the Pac-12 champ still have to play in the Rose Bowl (a heck of a consolation prize)?

Our first clue to answering this question will come Tuesday night when, for the first time, we get an idea of how the selection committee is evaluating the season. With eight undefeated teams from power conferences still left standing, and a possibility of at least three of them ending the year without a loss, there’s a lot of competition Oregon and Utah will have to get by. And we didn’t even mention the handful of one-loss teams to worry about like Oklahoma, Georgia, and whoever loses the Alabama-LSU game (or Ohio State-Penn State?).

But for one Saturday at the start of November, the Pac-12 showed off its best teams, and both passed their tests. The Pac-12 could not have asked for a better Saturday.