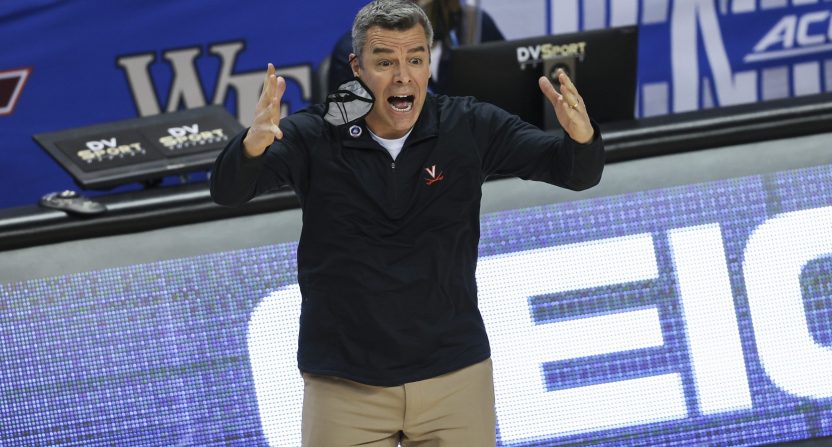 There are few more joyous moments in sports than a college basketball team hearing their name called on Selection Sunday.

Whether they were bubble teams or guaranteed a spot, it’s always a bit of a reflective moment of celebration, with teams both appreciating their own accomplishment and getting set to participate in the tournament itself. It’s a reset, of sorts, and as any Indiana fan will tell you, not one to be taken for granted.

For Virginia’s men’s program, though, this year is very different. After the Cavaliers withdrew from the ACC Tournament this week following a positive Covid test, they (like Kansas, which made the field, and Duke, which comically didn’t) were selected and placed on the four-seed line. They’re scheduled to play the Ohio Bobcats on Saturday, but they have until Tuesday to withdraw from the tournament and still be replaced.

According to Tony Bennett, the team is still hoping to play, and they’re in a strict health and safety protocol right now in order to make that possible. One thing that meant: they weren’t able to watch the selection show as a team.

Bennett said the Cavaliers weren’t able to watch the selection show together as a team, but met on a video call to celebrate and talk briefly.

“This is the first team I was not able to be with my team and watch the selection show. That’s kind of a cool thing you do,” he said. “On Zoom, we got together and congratulated them and talked a little bit about our opponent and just kind of went from there. That was strange.”

In addition to that missed team opportunity, there’s another obvious issue: UVA won’t be able to practice for most of the week, much less travel early.

The Cavaliers won’t be able to practice as a team until Thursday, although individual players not in quarantine will be able to work out and do some shooting. Before playing in the first round, Virginia will have to show two negative tests, 12 hours apart.

“It could be a situation where we practice here and you just show up at the game and play,” Bennett said. “That stuff I don’t know all the details yet. We’ll get into that. It’s unique prep, but we’ve got the chance.”

If Virginia really does have to roll up to the game and play like it’s an AAU tournament, much less if they’re missing multiple players, that game could be very interesting to watch on Saturday. Most of all, though, hopefully everyone involved makes a full and quick recovery.