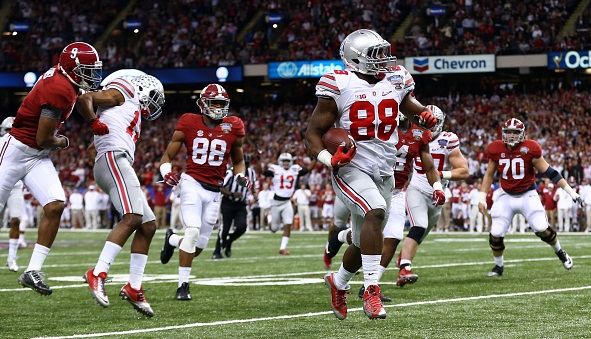 There is one final week left to the 2017 college football season. There are only a few possible playoff scenarios, and we know what will happen in some of those, no matter what. We know who controls their own destiny. So, for this final in-season iteration of the College Football Playoff Bubble Watch, I will leave everyone with three questions to ponder as you compare the resumes. One of these questions has a pretty easy answer; the other two certainly do not.

1. If Ohio State beats Wisconsin, is Wisconsin’s resume superior to Alabama’s? (Probably not.)

3. If Ohio State beats Wisconsin and Miami beats Clemson, is Clemson’s resume still better than Ohio State’s and Alabama’s? (This one really requires a lot of thought, but take some time to actually look at the resumes.)

I include the rankings in yards per play of each team. On the one hand, the resume is which teams you have beaten, so I stick to only identifying the quality of wins and losses and show you each contender’s remaining games. On the other hand, the committee “watches teams play,” which is really not a quantifiable statistic, but something that we can at least try to get a bearing on. Still, it’s hard to find an offensive or defensive metric that accurately represents all teams and styles of play.

For the purposes of determining quality wins, things like Top 10 and Top 25 are arbitrary numbers that do more harm than good. There is no reason the gap between No. 25 and No. 26 is considered significantly larger than the gap between 24 and 25. Therefore, to counteract this, I am being very lenient as to who is considered Top 10 or Top 25. Any team in the Top 25 of one of the major polls (AP or Coaches’), or in a significant number of the accepted computer rankings, will be considered in the Top 25 for resume purposes. This leads to the awkwardness of having more than 25 “Top 25″ teams, but it presents a more accurate picture of the overall resume.

I’m also changing a new category this season. Both Jeff Long and Kirby Hocutt constantly mention “wins over teams with winning records” as an important metric, so I’m going to show that to you. It is a less detailed way to view a win than looking at where each win is ranked, but the committee seems to care about it so we have to also. I will not count a win over an FCS team as a +.500 win, regardless of record. Again, even though the metric is a stupid one – there are cupcakes with +.500 records (for example, Appalachian State) – the committee cares about it, so we have to.

There are only two sections to discuss this week. A whopping six teams control their own destinies. After that, it’s a bubble of Alabama and Ohio State (if the Buckeyes win), with TCU hoping it can position itself in there as well.

Clemson’s resume is undeniable. The Tigers have the best win in the country over Auburn, and are an unheard-of 7-0 against the Top 40. The loss to Syracuse hurts, as does the offensive struggles, but this resume is so much better than everyone else’s right now. How is this resume worse than Alabama’s if the Tigers lose to Miami this weekend? It’s not, in any meaningful way.

Losing to Pitt and Notre Dame’s collapse have really hurt Miami. What once was a strong resume is now pretty mediocre, especially compared to everyone in this section. Still, it’s better than Alabama’s (once you add in a win over Clemson), so Miami is win and win, lose and go home. (And by “home,” I mean the Orange Bowl.)

Auburn has good metrics, and great wins at the top. In some other years, this resume might not be enough to get in with two losses. This year, there’s no question that it’s good enough. Here’s a fourth question to ponder: If Auburn loses to Georgia, why is this resume worse than Ohio State’s? (Honestly, it probably isn’t.)

This is a solid enough resume. In a year with too few of these, Georgia will be in the Playoff with a season-ending win over Auburn.

This resume has taken some hits the past few weeks, and the committee still seems to not like it because of those defensive numbers. Defense or not, Oklahoma has won its last five games –including two ranked wins — by an average of almost 23 points. Oklahoma is in with a win and out with a loss, whether that’s fair or not. (Question number 5: If Oklahoma loses this week and Ohio State wins, why does Oklahoma not deserve to stay ahead of Ohio State?)

This is where my system gets me in a bit of trouble. The computers count both Michigan and Iowa as Top 25 teams. Most humans recognize they are not, though both (certainly Michigan) probably will end up ranked with a bowl win.

Either way, the committee will recognize that they are opponents of decent quality, even if not Top 25-caliber. The Badgers have very quietly improved their metrics through the season. The SOS numbers aren’t great, but they’ll get a boost from playing Ohio State. So, looking at this resume, why should Ohio State jump Wisconsin even with a head-to-head win?

End-of-season collapses mean that Arkansas and Tennessee both finally fell into cupcake range. Even after the Auburn game, Alabama’s SOS numbers aren’t great. The metrics are good, and advanced metrics like S&P+ have Alabama as the second-best team in the country. Of course, he has Ohio State at No. 1. Alabama did not close the season well. How will the committee weigh that when comparing this resume to Ohio State’s?

As mentioned above, the computers love both Iowa and Michigan. So even if we leave that out, let’s say Ohio State is 1-0 against the Top 25 and 1-1 against 26-40. Either way, this stacks up pretty favorably against Alabama if you add in a win over Wisconsin. The wins are better, the SOS is better, and the metrics are about even.

What this will boil down to are the things that stand out for each team: Ohio State has that ugly loss to Iowa; Alabama won’t have won a conference championship. Can being Big Ten champions plus a slightly superior resume outweigh looking awful against Iowa? That’s what the committee will have to decide if Ohio State beats Wisconsin this weekend.

I don’t see a path to the Playoff for TCU, and this resume shows why. Two losses, ugly SOS number, and a total lack of quality wins make this resume unseemly. Maybe if TCU throttles Oklahoma the Horned Frogs can get in on eye test, but the resume isn’t there.