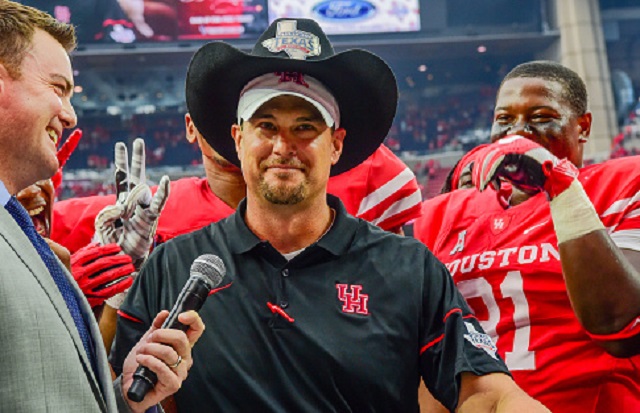 Which college football programs in need of a new coach made the best hire?

College football’s coaching carousel has almost come to a stop. One major-conference vacancy is left after California ousted Sonny Dykes this past weekend. It’s late in the hiring cycle, but perhaps the Bears think they can lure Chip Kelly back to college. Kelly would be better off waiting anyway, because some primo spots could be available later in 2017, such as Notre Dame, Tennessee, UCLA, Arkansas and Texas A&M.

As predicted by many, Texas was the winner in the Tom Herman Sweepstakes. Speculation centered around Herman taking over for Charlie Strong beginning in the fall of 2015 and it finally happened after the Longhorns won a bidding war with LSU (though LSU says it pulled its offer). Herman went 5-0 vs. Power 5 teams. He also has spent the majority of his coaching career in Texas, so he knows the recruiting landscape.

Tom Herman is apparently the savior of Texas football, per twitter. So, expectations should be a NC in two years.

The expectations and demands of this job are enormous. Texas is arguably the No. 1 job in college football (in-state talent, financial resources, great town, etc). Herman needs to win big quickly.

It’s funny that a guy who was fired at Texas would be this high. There are several reasons why things didn’t work out for Strong in Austin, Texas. But this should be the perfect fit for Strong, who built his success at Louisville (37-15) by mining his recruiting connections in Florida.

With its new reported opening, if USF hasn't offered Charlie Strong by noon then the school is doing it wrong.

The spotlight will be less intense at South Florida. And apparently, Strong is already a lot happier.

Strong takes over a team that was 11-2 and beat South Carolina in the Birmingham Bowl. Bowl game MVP Quinton Flowers will return for his senior season, so Strong doesn’t have to worry about the quarterback issues that haunted him in Texas. Flowers will be among 15 returning starters for the Bulls in the winnable American Athletic Conference.

Sometimes, you get lucky. This is a home-run hire. One of the most coveted coaches during the hiring season was Fleck. He was rumored to be a candidate for multiple jobs, including Purdue and Oregon, among others. No one could have predicted that he would land at Minnesota who jettisoned Tracy Claeys after his support of the brief players boycott. The Gophers benefited from fortunate timing and by Fleck still being available.

Says a lot about PJ Fleck that 2 recruits will join him at #Minnesota next week to begin the college without ever stepping foot on campus.

Fleck, 36, has charm and charisma, and recruiting analyst Tom Lemming famously called him “Jim Harbaugh Light.” There were reports that he would only leave Western Michigan for an elite job. Minnesota is NOT that job. The Golden Gophers haven’t won the Big Ten since 1967. It is, however, in the West Division which is considerably easier to win than the East.

Taggart is Mr. Fix It. In his first job at Western Kentucky, he took over one of the worst FBS programs in the country and turned it around. He’s responsible for the foundation that Bobby Petrino and Jeff Brohm had success with at WKU. At South Florida, he assumed control of a program that had been left a mess. The Bulls went 18-7 during his final two seasons.

Willie Taggart is at the national title game. Oregon's new coach would like to get back with the Ducks. https://t.co/W2Jg6DBQdS

Oregon should be his easiest rebuilding project. The Ducks have everything you need to be successful in terms of facilities and Phil Knight’s Nike money. The negative is that Oregon does not have a lot of in-state talent. Taggart’s success will ultimately be defined by whether or not he can convince California kids to head north.

Jeff Brohm is one of the premier offensive minds in college football. He’s worked under Howard Schnellenberger and Bobby Petrino. The man could put together a strong offense even if his players were octogenarians with canes. He took Western Kentucky to unprecedented heights and was in line for a job upgrade.

Jeff Brohm, a great hire at Purdue. Boilermakers will reap the benefits soon and introduce the next version of Drew Brees.

Winning at Purdue is going to be a challenge. The last coach to move the needle was Joe Tiller from 1997 to 2008 and he had Drew Brees (1997-2000) when most successful. Back then, throwing the ball 40-50 times in the Big Ten was a novelty. That’s not the case anymore. Since the 80s, Tiller is the only Purdue coach to finish with a winning record at the school. First-year expectations should be low. Purdue (3-9, 1-8) tied with Michigan State for the second-worst record in the Big Ten.

This seems like the safest hire. Luke Fickell was a longtime Ohio State assistant and the interim head coach in 2011 before the school hired Urban Meyer. He worked under Jim Tressel and Meyer, who somewhat surprisingly decided to keep him on staff for 2012. Fickell did a good job at Ohio State and his ties to the state run deep.

No idea how Luke Fickell will do as a head coach but he surely deserves the opportunity. Cincinnati seems like a great fit.

Cincinnati is a solid job and has a recent track record of being a launching pad to bigger jobs. Butch Jones (Tennessee), Brian Kelly (Notre Dame) and Mark Dantonio (Michigan State) all worked there. Since 2007, Cincinnati has won at least nine games seven times, including a stretch from 2011 to 2014.

Lane Kiffin is America’s favorite punching bag. It’s easy to make fun of him and everyone seems to enjoy celebrating his flaws and stumbles. But he has worked for some of the best coaches in America (Pete Carroll and Nick Saban), and also been humbled after several embarrassing moments.

For Florida Atlantic to get a coach with his résumé, failures and all, is a coup. The Owls are a young program that came into existence in 2001. They’ve only had four coaches and the last guy with any previous head coaching experience was Howard Schnellenberger, who founded the program and led them to bowl game appearances in 2007 and 2008. If Kiffin can just get Florida Atlantic to be competitive, that’s a major win.

You can go home again. When in doubt, hire the guy you know. It worked for Kansas State (Bill Snyder), Louisville (Bobby Petrino), and Oregon State (Mike Riley). Connecticut hopes Edsall 2.0 will have similar success. Edsall took UConn from its transition from the FCS to the FBS and to their greatest seasons as a major conference program. The Huskies went to bowl games in his final four seasons, capped by the 2010 Big East championship and a BCS bowl appearance.

Randy Edsall: "I apologize for the way I left. I was wrong."

Edsall then bolted for Maryland where he was 22-34 and never won a bowl game. UConn is a difficult job, but no one is better equipped to deal with those hurdles than Edsall.

This is probably as good a hire as Baylor can make. The impact of the Baylor sexual assault scandal led to numerous de-commitments. The school is under a Title IX investigation. That will affect the program in the not-too-distant future and will make the school a tough sell. Long before Art Briles got there, Baylor’s strict student conduct code presented its own obstacles.

Rhule won at Temple – which is not easy. The Owls were first in the AAC East over the past two seasons and went 14-2 in conference play. If Baylor is patient, he could be able to get the Bears back into Big 12 contention.

Usually for a major rebuilding process like this, a school would seek out a young, up-and-coming coordinator. Nope. Fresno State went old school with the 55-year-old Jeff Tedford returning to his alma mater.

You know who coached Aaron Rodgers in college? Jeff Tedford.

Tedford is best known for being a longtime coach at California (2002-2012). He’s also known for the quarterbacks he has developed at various colleges: Trent Dilfer, David Carr, Akili Smith, Joey Harrington, Kyle Boller and Aaron Rodgers.

Fresno State (1-11) had the worst record in the FBS, but lost four games by a combined 15 points.