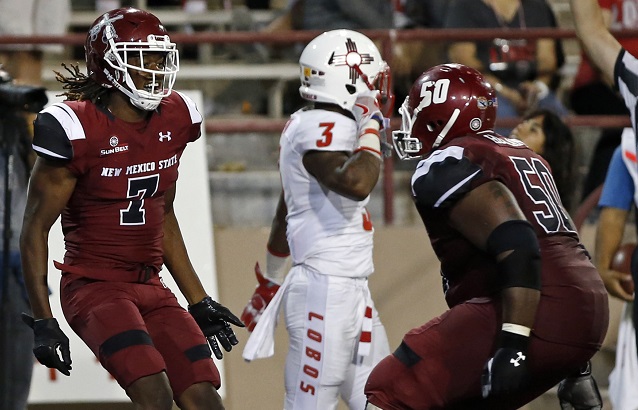 When New Mexico State wide receiver Gregory Hogan scored the go-ahead touchdown pass on Saturday, the moment was lost to the larger college football faithful. The score and subsequent extra point would be the difference-makers for the Aggies in a 32-31 victory over archrival New Mexico – the latest chapter in the storied (to some) history of the Rio Grande Rivalry.

The Rio Grande Rivalry may be one of college football’s best traditions. Unless you live in the state of New Mexico, it’s also unlikely you’ve ever paid much attention to it.

Starting in 1894, the University of New Mexico and New Mexico State University have played most years in college football. To the victor goes the Rio Grande Rivalry, and the winner most years has been the Lobos, especially in recent times. Long-time members of the WAC and then the Mountain West, New Mexico’s football program has always been on steadier footing, it seems. The on-field results have reflected that. The Lobos have won 21 of 29 dating back to 1988, and own a 70-32-5 advantage in the all-time series.

And yet, people – people in New Mexico, that is – care about this series. Because despite the one-sided nature of that record, the Rio Grande Rivalry (or the “Battle of I-25,” as it once was) is almost always interesting. It also faces uncertainty going forward.

On March 1 of this year, the Sun Belt voted to get rid of geographic outliers and standings cellar-dwellers New Mexico State and Idaho. Forced to find a new home after the WAC’s demise in 2012, the programs have taken separate paths toward their respective uncertain futures.

Idaho elected to become the first school to ever drop from FBS level to FCS. They’ll join the Big Sky in 2018. New Mexico State, on the other hand, will go it alone as an FBS independent. It’s a wilderness they’ve inhabited before (and as recently as 2013). Despite their location (remote Las Cruces, N.M. with a population of 101,000) and their consistently losing ways (last bowl season: 1960), they appear confident they’ll still find a way in college football’s highest level.

Back in May, the New Mexico State Board of Regents announced they would “stay the course” with FBS, this despite zero overtures from the only western non-power conference, the Mountain West. Their upcoming schedules are barren (just three opponents scheduled through 2021), and even if New Mexico signs a renewed long-term deal to play every year, it’s getting harder and harder to believe the Aggies can meet the NCAA minimum of five home games in 2018 and beyond.

Still, the Rio Grande Rivalry appears to be at its strongest level in quite some time. The one-point win collected by NMSU last Saturday was the third consecutive contest decided by 10 points or less. Just six games since 2003 have been decided by more than that margin. New Mexico State has also managed to turn the tide of the series over the last decade or so, including a three-game winning streak from 2009-2011. Despite two streaks in there, the schools have split the last eight games at four apiece.

The rivalry’s strength outside of football has also grown to even greater heights, including a spirited alumni basketball game that took place this summer, too. Both basketball programs have exhibited runs of success – the Aggies’ own history there may actually out-pace the Lobos, even – and there’s little doubt that series can maintain its strength. But can fans – yes, the concentrated, in-state contingent – really count on the football series remaining an annual thing?

That will largely depend on how viable NMSU can remain long-term as an FBS independent. As mentioned, the doors to Mountain West are not open at this time. And the scheduling road is perilous if they fail to secure a conference affiliation soon. The Mountain West could potentially lose a member or two to Big 12 expansion (notably, Air Force and Colorado State). But the MWC has already indicated it is looking first and foremost at the state of Texas for its own growth. The Aggies would need an olive branch from its chief rival AND a lot of additional in-conference support from the Mountain West, too. There’s no telling if that will ever come.

If it doesn’t, the school may be forced to make the same decision Idaho did – even if its avenues in the FCS are still slim.

Should they go that route, however, it could put an end to one of college football’s longest-running rivalries. The Rio Grande Rivalry’s 107 meetings are among the most in the Western portion of the country.

Despite the lack of non-local television attention, lack of local recruiting and a perceived lack of excitement around football in the state of New Mexico, the rivalry has proven itself for more than a century. There is no national attention to be had. No well-renowned traditions to be harped on in the country’s bars every Saturday. You’d be hard-pressed to locate too many Lobos or especially Aggies beyond the state’s borders or maybe portions of Arizona and West Texas.

And still, the Red Rally, the burning of Pistol Pete and more are both quality elements to a rivalry and elements of a rivalry in jeopardy. For all we know 2017 is the final iteration of the game as we know it. And maybe even the final season of New Mexico State football as its currently comprised.

So that 32-31 Aggie victory few were able to watch outside of the state, and it’s a struggle to even find a non-AP recap for, even at most local media outlets? Maybe it ends up being one of the lasting memories in a rivalry time will eventually forget. Or perhaps the churn of conference realignment forgets to turn New Mexico State into a pumpkin at the stroke of midnight. We’ll find out soon enough.