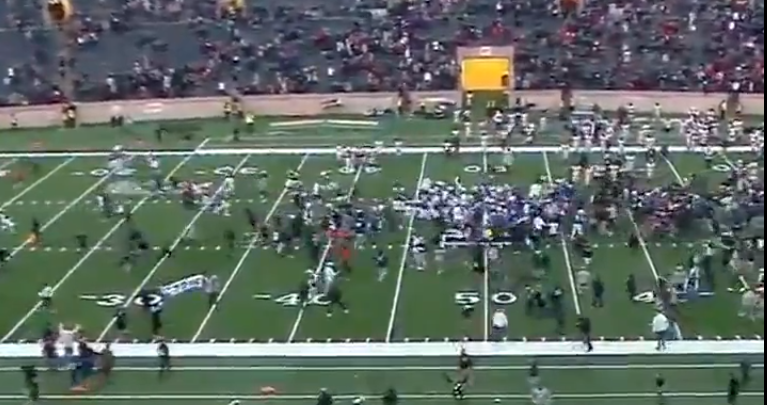 One of the wildest college football finishes Saturday came in the 136th meeting between the Harvard Crimson and the Yale Bulldogs. A share of the Ivy League title was on the line for 8-1 Yale, while 4-5 Harvard had the chance to play spoiler against their rivals. Harvard jumped out to a 15-3 lead before the game was delayed for an hour by a climate change/divestment protest at halftime, and things got even stranger after that en route to Yale’s eventual 50-43 double overtime win.

In the third quarter, the Crimson stretched their lead to 22-3 thanks to a 59-yard touchdown run from Aidan Borguet. That was his second long touchdown of the day; he’d previously scored on a 47-yard run in the second quarter.

TOUCHDOWN AIDAN BORGUET!!! On the board early in the 3rd!

The Bulldogs fought back after that, though. Zane Dudek ran in for a touchdown of his own, and Sam Tuckerman added a field goal to make it 22-13. After that, though, Borguet picked up yet another long touchdown run, this time rushing 60 yards to paydirt. Kurt Rawlings responded with a touchdown run for Yale, but in the fourth quarter, Borguet again found daylight for a 67-yard touchdown run that made it 36-19 Crimson with 13:03 left to play.

Unbelievable! Borguet with the 67 yard touchdown!

That was still a fair bit of time, but the Harvard defense held for most of it. The only scoring they allowed in the next 11 minutes was another Tuckerman field goal with 8:51 left, and the Crimson still led 36-22 inside the final two minutes. However, the Bulldogs’ offense then found a new gear, with Rawlings finding Mason Tipton on a 10-yard touchdown pass with 1:28 left to go (capping off a nine-play, 96-yard drive).

Yale then recovered the ensuing onside kick, and Rawlings hit JP Shohfi for a seven-yard touchdown with 18 seconds left. A Tuckerman extra point and a Harvard kneeldown then sent the game to overtime. But that was interesting, as the game was running much later than expected thanks to that protest, and Yale’s stadium doesn’t have lights for night games. So darkness was a factor here as well.

Yale vs. Harvard delayed by climate protesters is now literally fighting Mother Nature in a stadium with no lights as darkness soon come. pic.twitter.com/fDUj7zzUjX

In overtime, Harvard’s Jake Smith hit Cody Chrest for a 25-yard touchdown on the first possession, but Rawlings responded with a drive that ended with a nine-yard touchdown pass to Caden Herring. Yale’s second possession saw another Rawlings-led drive capped off with a four-yard Dudek touchdown run.

The Bulldogs then hung on for the win, shutting down the Crimson on their second possession.

That win gave Yale a share of the Ivy League title with the Dartmouth Big Green (who beat the Brown Bears 29-23 Saturday), and it improved their all-time record against Harvard to 68-60-8. It wound up being one of the most memorable games in that series as well.