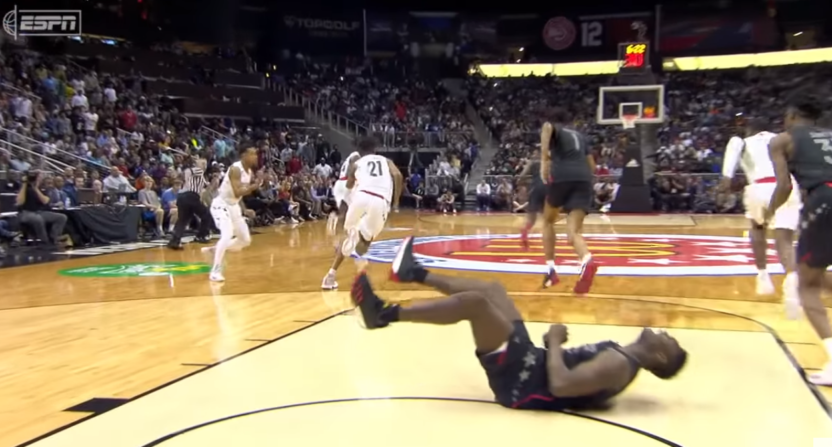 The McDonald’s All-American Game was a pretty tough watch, there’s no denying that. It amounted to a glorified scrimmage, though one filled with plenty of ridiculous athleticism and highlight-reel dunking on display. There wasn’t much defense, rarely was there any ball movement, and if it’s possible for it to be any looser than this description portrays, it was.

That frustrated the broadcast team, especially analysts Jay Williams and Cory Alexander, who spent most of the night complaining that the high school kids with everything to lose weren’t playing as though they had anything to gain. There was no better illustration of the stupidity of that mindset than this sequence, with the score tight late, when the crew starts to finally deem the players’ effort more acceptable. Then dunk contest god Zion Williamson gets hurt.

It’d be funny if the injury wasn’t so serious.

In the aftermath, as a viewer, it was even more frustrating; Williams and Alexander went on about how Williamson wasn’t in pain, he was angry that he’d turned it over on the play. And hey, maybe it was anger that he had one turnover in a meaningless exhibition game en route to being forced to play a year at Duke before he can actually get paid his market value (well, closer to it) to play basketball in the United States. Or maybe it was pain from what looked like a gruesomely dislocated thumb, as ESPN’s Jeff Goodman reported after the game:

The family released a statement after the game saying Williamson, who is left-handed, will see a personal orthopedist on Thursday upon returning home to South Carolina.

One of his teammates, Nazreon Reid, told ESPN that it looked as though Williamson had dislocated his thumb.

This is exactly why they don’t play hard! Why risk it? Sure, Williamson will probably be fine in this case. But freak injuries are by definition unpredictable, and can happen even in a scrimmage setting. (Ask Paul George.) That Jay Williams, who should know more than anyone what it means to have your basketball career effectively ended instantly by avoidable injury, would spend a broadcast lamenting the lack of effort from kids who are already playing for the benefit of everyone but themselves is infuriating.

The coverage of the entire event is weird. These are kids who are still in high school, after all, and they’re being written up like this, from ESPN’s draft Insiders Jonathon Givony and Mike Schmitz:

The feedback from NBA executives in Atlanta, including numerous general managers, was decidedly mixed, with quite a bit of grumbling regarding the format of the practices, the competitiveness of the participants and the overall quality of the 2018 high school class, which should form the backbone of the 2019 NBA draft.

A distinct lack of energy and urgency prevailed in all three practices, as many of the best players coasted, seemingly not having much to prove despite the presence of such a large number of people in the stands who will have a huge role in deciding the outlook of their professional careers.

How are we still covering it this way? How do people not realize that the high school kids acting in their self-interest (by not risking damaging their long-term prospects by injuring themselves in pointless settings) is not any different than what the NBA execs and scouts are doing when they complain about their jobs being harder because of it? If anything it’s better, because those NBA executives were paid to be there, as were the media rubberstamping their concerns.

In perhaps the most ridiculous example, Jeff Goodman told Indiana star (and still uncommitted) Romeo Langford to smile during a mid-game interview so Goodman could win $10 on a bet from a college coach. So Romeo did, and sure, Goodman probably wasn’t consciously trying to be weird. He was just trying to create a fun moment with a kid who comes across as reserved. But had Romeo Langford taken $10 from a college coach, he’d have had to pay it back to avoid being ineligible. He’s already doing work for others, including ESPN.

And that’s what the broadcast came across as, people complaining about the product, as though the McDonald’s game has some history of fiery, intense competition that should be honored, or that would be missed if it disappeared forever. If the game disappeared entirely no one would miss it, except perhaps for the kids who get to participate. Let them do it however they want to if you’re going to have it at all. Otherwise they’re going to get hurt for no reason.