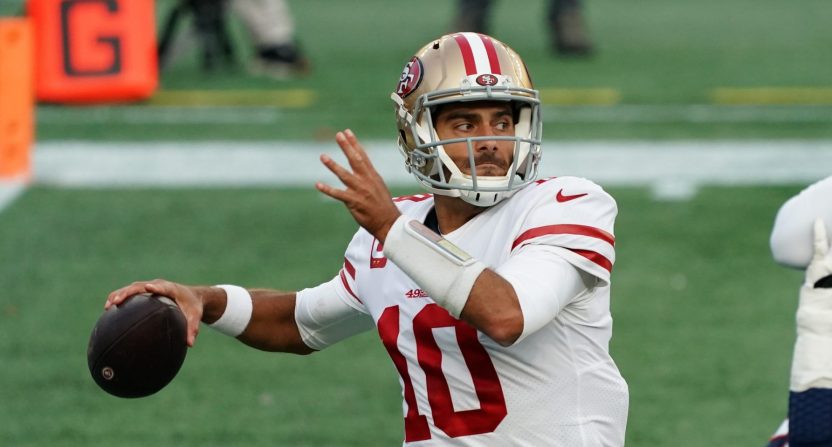 NFL free agency gets underway in just a few weeks. The current pool of impending free agents is far from shallow, but it’s likely to become significantly deeper as teams cut veterans in order to get under a reduced salary cap.

With that in mind, let’s look at some key players who should be on the release radar in the coming days and weeks.

San Francisco 49ers QB Jimmy Garoppolo: Jimmy G has failed to stay healthy in two of his three seasons in San Francisco. If the Niners think they upgrade, they can save $23.6 million by moving on.

Washington Football Team QB Alex Smith: The 36-year-old’s comeback story is great, but he’s not the long-term answer at this point. If Washington is sure it will bring in a new signal-caller, it will likely opt to part ways in order to pocket $13.6 million.

Pittsburgh Steelers QB Ben Roethlisberger: This remains extremely unlikely, but the Steelers have no cap space and can save $19 million by parting ways with their declining 38-year-old quarterback this offseason.

New York Jets WR Jamison Crowder: As the Jets retool with a new coaching staff, is an average player like Crowder really worth $11.4 million? They can save $10 million by dropping him.

Tampa Bay Buccaneers TE O.J. Howard: If Rob Gronkowski returns with Cameron Brate, the Bucs might prefer to raise $6 million in cap space by ending the Howard era a year before the end of his rookie contract. That could make it a lot easier to bring back all of their key in-house free agents. A trade is a possibility as well though.

New York Giants OT Nate Solder: The so-so 32-year-old will be coming back from a COVID-19 opt-out and will cost $16.5 million unless the Giants cut him to save $6 million. At this point, moving on might make more sense, but they might wait until later in the offseason to see who else they bring in.

Green Bay Packers edge Preston Smith: The 28-year-old disappointed in an expensive second season with Green Bay. Now the cap-strapped Packers can raise $8 million in space by releasing him. They might have cheaper options to complement Za’Darius Smith in the draft.

Cincinnati Bengals DL Geno Atkins: The former star is about to turn 33 and isn’t the same player he once was. Cutting him would create $9.5 million in cap space for a rebuilding Cincinnati team.

Minnesota Vikings LB Anthony Barr: The Vikes are tight on cap space and have other priorities. They can save $7.3 million by saying goodbye to the soon-to-be 29-year-old.

New England Patriots LB Dont’a Hightower: The Patriots could be on the verge of at least a minor rebuild, and Hightower is approaching 31 after an opt-out season. Releasing him would create $9.9 million in salary-cap savings.

New England Patriots CB Stephon Gilmore: The 2019 Defensive Player of the Year showed signs of decline in 2020 and will cost $15 million in his age-31 season- unless the arguably-rebuilding Pats decide to move on and pocket $7.7 million.

Tennessee Titans CB Malcolm Butler: Tennessee has some decent young corners, Butler has faded on the north side of 30, and the Titans can save $10.2 million by filing for divorce.