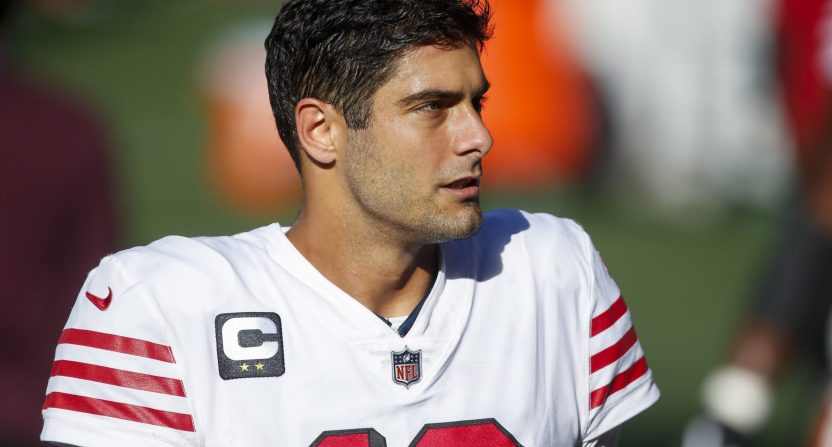 Yesterday was the NBA’s trade deadline, but today the NFL may have topped their fellow league’s action on the transaction front.

With the draft little more than a month away, teams are starting to position themselves in order to take swings at various tiers of prospects, and there isn’t likely to be a bigger outlay of draft capital than what the San Francisco 49ers gave the Miami Dolphins today.

Blockbuster deal with massive ramifications for years to come. pic.twitter.com/nRLMUaWGo5

In a draft with at least three top quarterback prospects, giving up that much to move up to the third overall selection is a pretty clear signal that the 49ers plan on taking one of Trevor Lawrence, Zach Wilson, or Justin Fields. According to Schefter, the 49ers moved up to third and are good with whoever falls to them there. (A fun thing to think about as a Bears fan: the Bears paid the 49ers needless draft assets in order to move up one spot and take Mitch Trubisky when they could have sat at #3 and had him anyway.)

And the 49ers did not trade up with one QB in mind. They traded up because they’re good with the options that will be their at No. 3.

Of course, there’s one person who probably isn’t super thrilled to see San Francisco make an aggressive move for a quarterback: San Francisco’s current quarterback. Jimmy Garoppolo played in a Super Bowl just a few years ago, and now he knows that not only is he not the future for the franchise, but the team was willing to give up a lot to draft his replacement.

The 49ers are predictably getting out in front of this, via Schefter:

49ers now square in the QB mix, but are holding on to Jimmy Garoppolo and have no plans to trade him, per sources.

They have to say stuff like this, of course. Whether it’s an effort to keep Garoppolo happy ahead of a one-year stint with a rookie waiting in the wings or an effort to maintain leverage while considering trade offers or a mix of both of those things, there’s no upside to coming out and saying “Yeah, we’re clearly looking to upgrade over Jimmy.”

Garoppolo has been, well, fine. He hasn’t been a superstar when on the field, but he’s been solid; the problem has been staying on the field to begin with. He played just six games last season ahead of a torn ACL.

One team that might make logical sense: Garoppolo’s former team, the Patriots. There’s also the fact that Garoppolo’s contract is now in a zone where moving on wouldn’t be that tough for the 49ers; he’s now entering the final two years of a five-year deal signed ahead of the 2018 season, and there isn’t much guaranteed money left at all.

This deal means he’s leaving at some point, though. Teams don’t spend that much unless they really love a tier of quarterbacks, and the 49ers won’t be taking one of the top prospects and then extending Garoppolo.  Keeping his cap hit on the books while starting a rookie doesn’t make sense either; that’s wasting a chance to build around a good quarterback on a rookie-scale deal.

Whether it’s this offseason or next, a Garoppolo trade feels inevitable.