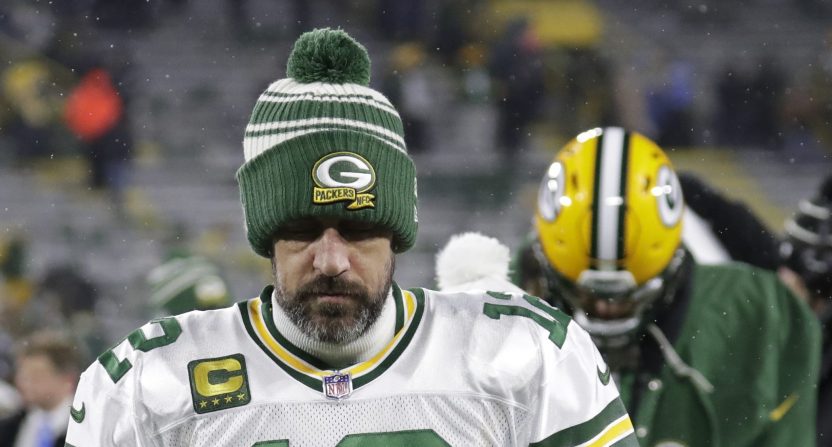 A large part of Aaron Rodgers’ future in the NFL has to do with the significant dollar figure that he’s owed in the remaining two years of his contract.

It’s unlikely that the Green Bay Packers quarterback is going to leave upwards of $60 million on the table for 2023, but Rodgers has yet to determine any plans for his immediate future.

Naturally, he was asked by Pat McAfee during his weekly appearance on The Pat McAfee Show on Tuesday, about how much the $60 million he’s owed in 2023 will factor into his eventual decision.

“I don’t think there would be a scenario where I’d come back and that would be the number,” Rodgers said via Pat McAfee on Twitter. “Definitely things would have to shift…There would have to be some adjustments for sure.”

Rodgers acknowledged that there are a lot of teams in the NFL that are strapped for cash due to the ramifications of the COVID-19 pandemic. There have been instances where teams have had to maneuver financially and either push more money out into the future or create void years to allow for an easier cap hit.

In Rodgers’ instance, NFL insider Tom Pelissero of NFL Network points out that $58.3 million of Rodgers’ $59.515 million in 2023 cash is structured as an option bonus. According to Pelissero, once that option is exercised for the 2023 season, his cap number would be only around $31.6 million. Though, he would collect all of that money prior to Sept. 30.

Right now, the cap figure for 2023 and beyond, appears to be the biggest caveat for an opposing team that wants to acquire Rodgers. Though, this is the first time he’s publicly acknowledged that the figure will unlikely be the same if he elects to return for another season.